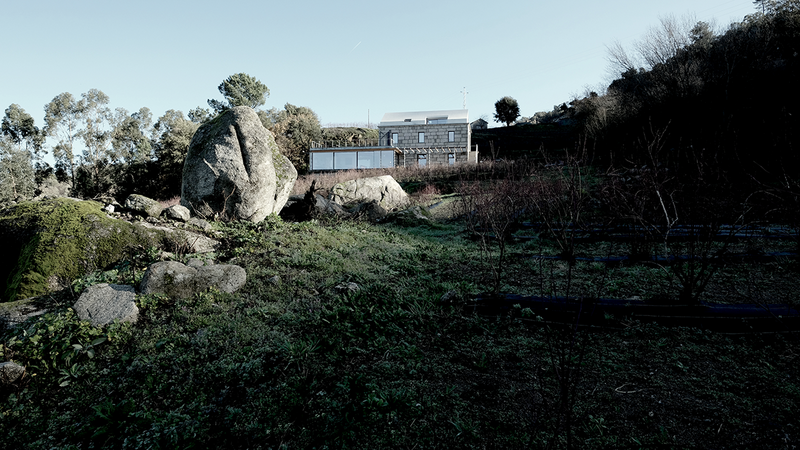 The new roof and extension from afar. Credit: Stefano Riva

Ten years, and two children, after a couple first began dreaming of leaving their urban lives in Lisbon to live on – and off – a 9ha parcel of inherited land in Portugal’s Douro Valley, Stefano Riva and Omar Sala have transformed the site’s twice-burned-down ancestral house into a three-bedroom family home. The property had sat as a roofless ruin for 50 years, awaiting resuscitation.

The land had been left to the client’s mother by his grandfather. As one of 14 siblings, she had long been instructed in her father’s truisms: ‘Farming is a perfect way of losing money’, or ‘Live not from the soil but from the State’. That grandfather nevertheless failed to practise what he preached, continuously buying land but living an austere life in order to leave his now many descendants with small parcels dotted all over lower Douro’s southern hills.

Nobody in the family, or who has worked the land, knows exactly when the existing house was constructed, but it is thought to be dated to around 1880. What is known is that it was twice burnt down, the last time in the 1970s, but the client couldn’t help but see promise and potential in its extremely sturdy four granite walls. For Riva, an Italian architect resident and practising in Portugal for more than 20 years, the project was a decisive call for an ‘anti-mimetic’ approach, resulting in the design of a ‘volume like a piece of furniture’, or a ‘box within a box’, in order to avoid any notion of reconstruction and define the new construction’s generational difference from its older host.

The result is the insertion of an autonomous light steel framed volume inside the ruin’s remaining granite walls and modest 70m2 footprint, with a concrete lip for the new second floor to give the ruin’s walls stability. The narrative of the building’s different episodes and states are consciously and graphically expressed through the extrusion of a new white gable roof, which thrusts out of the original structure like a flag signalling the building’s renewal. Internally, the new structure enables a guest room like a monk’s cell, with its own terrace, and the master bedroom wardrobe storage – necessary given the property’s modest dimensions and because local planning regulations stipulated that the new structure must remain within the ruin’s former two storeys. By pushing into the roof space, the architect managed two and a half.

That white roof is the home’s main graphic, sculptural gesture – Froebel-block-like in its simplicity of form. It caps the house with a humble grandeur like a contemporary crown. But while appearing like cast concrete, the house in fact wears a much simpler hat-sandwich of OSB, insulation and Dryvit that reduces both budget and load. The roof’s whiteness helps with the property’s thermal demands (projected to reduce internal temperatures by up to 16° in the valley’s sometimes blisteringly hot summers) while its colour and material were chosen to be easy to maintain and repair in the building’s rural setting. Three years into its life, the white roof has begun to show marks of its stay in the wild – lichen is beginning to grow on its sunnier south, grey streaks offer memories of winter rain on its north. A decision whether to maintain that whiteness or to allow the house to camouflage itself into the landscape will likely need to be made in the near future, with such a choice becoming a bit of a metaphor; illustrating the care that contemporary constructions often demand, when read against walls that have withstood two fires and over 100 years.

Inside the house, on top of the grey micro concrete of the ground floor, this play between the virgin white of the contemporary and the noble granite of the past continues. The stone in places shows its memories of past fires through a pink tint. An interior wall was partly removed to create an open plan space. Leftover stones have been used to make steps outside that frame a sunken courtyard, while the remaining two-block high internal wall divides the living space from kitchen, becoming a counter for the worktop and hobs.

For the client and architect, the major challenge was to create and imagine internal circulation through the empty shell of the ruin. The existing two handsome external staircases remain in place, mirroring each other on opposing sides of the building to take occupants from the terrace to the first floor (as they always have) but a new wooden staircase now sculpturally wraps and winds up a corner of the open ground floor to the three bedrooms and two bathrooms. The staircase clings and hovers off the home’s rear internal wall to maximise available space, preserving a dramatic airy void between the ground floor and the apex of the sloping roof above, while tucking storage into its twists and turns. No new windows were opened from the ruin’s shell. Existing voids for windows and doors were instead maintained and given new life through homogenous corten-coloured aluminium frames, which create interesting games as you ascend through the house. A narrow slit of a horizontal window reads like a contemporary architectural intervention as the staircase intersects it, but is in fact another instance of productive dialogue between the old and the new.

Snuggled up against the old structure, an additional béton brut walled extension both complements and contrasts with the old house’s stone to form a new glass fronted lounge-cum-home-office; expanding the house’s area within the legally permitted 20% limit and adding a roof-terrace with more sweeping views to create more space for the inhabitants. Outside, the imprint of the concrete’s wooden cladding talks to the surrounding landscape and adjacent olive trees. A glass corner connects the extension back to the main house, preserving an old doorway and adding a sightline through the house, from the hill behind to the valley in front. Construction is again deliberately modest. The roof exposes its Nordic-pine joists and the chimney breast acts as a division between lounge and small office as well as adding stability. Following the line of the land, the extension appears to make the house step down to the valley, like the agricultural terraces that extend below.

The clients took a gamble on this house and new life, leaving the security of their jobs in project management and digital infrastructure to test a life lived off the land, and their inventiveness in finding the means to make this dream a reality, and the consequences of that, are some of the project’s most notable aspects. Construction of a natural pool is planned for next year, with costs split between the them and their new neighbours (to whom the clients sold a house on a neighbouring plot of land to both augment their budget and invite another family to share the valley’s solitude). With cash flow from farming a known-unknown economy, phased development was essential. As a means of bartering over the budget, the clients promised to find Riva more projects in the surrounding area. To date this numbers four – with that house for the neighbour and two others under construction, and a small boutique hotel in the design phase. The family refers to Burnt House’s guest room as ‘the architect’s room’. On its walls hang two of Riva’s paintings, and soon his drawings will grace the labels of the client’s wine. Burnt House spawned more than just an architectural project, it created an additional enduring bond between architect and client.

The name of the farm where the clients now carry out their small independent business living on the land is called ‘Enxertada’, which means ‘grafted’ in English. Surrounded by blueberry bushes, and sat beneath the vinho verde vines from which the clients now make their livelihood, Burnt House offers an architectural manifestation of a grafting of new onto old; the fresh growth of a contemporary home rising from the rootstock of a long burnt-out ruin.