The family of the current owner of Bosjes, an ambitious new hospitality development and garden on a working farm 110km northeast of Cape Town, took ownership of this mountainside property in 1831. Among the fixtures was a rectangular manor house erected in 1790 in the prevailing Cape-Dutch style. The years between the house’s construction and its acquisition by the Botha-Stofberg clan were tumultuous. Deep ravines in the neighbouring mountains provided ample refuge for bandits and cattle rustlers. Waaihoek Peak, immediately behind Bosjes and named for the intemperate winds that plague the heat-wracked Cape in summer, was especially notorious. The last ‘drosters’ were flushed out of their elevated hideout only in the 1820s.

South Africa’s colonial history is inescapable at Bosjes. Formerly known as Bosjesman’s Valley Farm, the estate’s shortened name retains a vestigial reference to the region’s indigenous San peoples – Bushmen, or Bosjesmans in Dutch. Its new name translates as ‘bushes’ and shifts the focus to the region’s once dominant, but now critically endangered heathland of fynbos and renosterveld. Opened to the public in early 2017, Bosjes initially comprised a guesthouse, restaurant and audacious chapel. This year it unveiled an elegant garden café and shop, tactfully placed in two sunken, amphitheatre-like spaces within a processional garden. To keep their charm discreet, their vaulted ceilings are over-wrapped by the lush landscape. The new garden, laid out next to a long thin vineyard that mirrors its dimensions, binds together the estate’s disparate architectural elements – notably the fusty manor house and chapel – into a coherent unity. 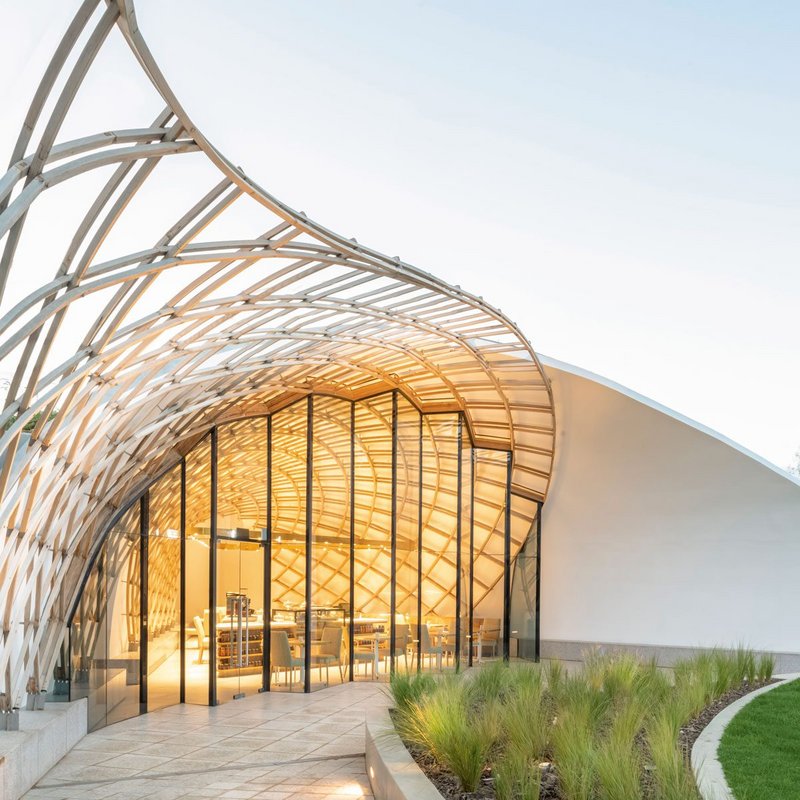 The café, one of two new buildings sunken into the landscape for visitors to Bosjes. Credit: Dave Southwood

While discontinuous with the stolid vernacular of the surrounding farms, Bosjes forms part of a wider post-apartheid reimagining of the fruit and wine farms around Cape Town into ritzy hospitality destinations, notably in Stellenbosch and Franschhoek. In its abundant novelty and experimentation, the estate nonetheless preserves many signifiers of the building ethos and cultural values particular to a valley once at the outer edge of white settlement in this part of Africa.

The architect responsible for much of the estate’s idiosyncratic language is Coetzee Steyn of Steyn Studio. A former TP Bennett staffer who divides his time between London and Madrid, Steyn was born further along the Breede River Valley, in Montagu, and trained as an architect in Cape Town. He is intimately familiar with the imposing beauty of the Cape Fold Mountains and the agrarian settlements that have flourished in their basins. Introduced to the Bosjes owners in 2005, he threw his hat into the ring five years later when he heard that they had jettisoned their original idea of a residential estate in favour of a hospitality venue.

Bosjes is Steyn Studio’s first major public project, albeit on a private estate. Even with the addition of the garden and its related architectural features, the centrepiece remains its Instagram-friendly chapel.

The pristine white of the chapel’s roof also achieves an unexpected reconciliation. From a midpoint in the new garden, the estate’s two major built structures – the manor house and chapel – are visible as white protrusions over an organised landscape of greens and browns. The garden is a secondary intervention, despite including the submerged garden café and gift shop, an elevated bridge, children’s play area and extensive water features with dry-packed stone walls. The client wanted a scheme that would add bulk without interrupting existing sightlines, to create a subordinate environment informed by architectural modesty.

Steyn was unfazed by the brief. He likens the estate’s manor house and chapel to the region’s two dominant mountains, Waaihoek and Slanghoek, and the garden to the fertile valley that once sustained a floral abundance. To implement the technically demanding brief of hiding approximately 750m² of building in a rolling garden environment, Steyn partnered with Square One Landscape Architects. The practice’s founder, Sydney-based Mark Saint Põl who is originally from Cape Town, brought a wealth of experience to the project. Saint Põl had worked on Green Point Urban Park, a lauded public project in Cape Town that includes a didactic garden, and nearby Botha’s Halte Primary School, a thoroughgoing reimagining of a rural farm school.

Bosjes was reached via an unpaved road that threads past the primary school and the undulating chapel roof, providing a jumble of first impressions. But now a new access road from the valley’s arterial route approaches the estate frontally, through vineyards and farmlands, with the manor house functioning as the chief orientating beacon. This formal approach is in keeping with the choreographed way Cape Dutch estates are traditionally encountered. In this idealised schema, the garden operates as an interstitial space to access the chapel, which presents as the coup de grâce following a series of architectural reveals. Of course, visitors can and do short-circuit this navigational circuit by parking nearer the garden café to access a reviving coffee.

The garden at Bosjes has been organised into three parts: a ‘wild woodland’ at the manor house end with an incipient grove of flowering Cape Chestnut, a median ‘grassy glade’ that hosts the two submerged retail spaces with substantial hidden bulk, and a ‘renosterveld meadow’ with slatted walkway leading to the chapel. ‘The lower portion of the garden has been dedicated to the rehabilitation of endangered renosterveld and fynbos species,’ says Saint Põl of the planting. ‘The intention is to demonstrate how derelict farmland can be restored and to showcase these incredible species.’

The arcing form of the main processional route is one of the main structuring elements of the garden. It not only increases the impression of the site’s width but also enabled the terrain to be shaped to accommodate the staggered spatial experiences hidden in the landscape. Steyn Studio’s design of the complementary garden café and gift shop is informed by both vernacular and biophilic design. Decorative trellises – oak at the café, metal at the gift shop – gesture lightly to both the portable huts created by San herders using curved, slatted wood frames covered with woven mats, and the thatched truss homes of early Dutch settlers.

Bosjes’ submerged buildings are analogous to these dwellings, says Steyn, in that they have the landscape thrown over them. While he was tempted to employ a pure gridshell design for the hospitality areas, the technology is not widely known in South Africa. The trellis features, which extend to the interiors of the glass-enclosed café and gift shop, will eventually become overgrown with climbing plants, further accentuating the dominant leitmotifs of inside-outside and visibility-concealment in the garden.

Zigzag shadows cast by the trellis gave Steyn the basis for the vertically stepped window fronts. This offers better lateral structural stability against wind loading without the need for additional steel structures, and avoids the mirroring associated with large planes of glass. The vaulted ceiling of the front-of-house spaces is composed of a thin, white-painted concrete shell. Additionally, in the café, a natural light well at rear integrates a cross motif. Floors and walkways are terrazzo throughout. These treatments echo the materials and logic of the chapel, while triangular copper lights suspended from the ceiling define the floor plan in both. Liam Mooney handled the interior design.

Despite seesaw Covid restrictions and a winter downpour, the garden café was brimful on a recent visit. Big it isn’t, but seating areas are generous and the flow between the serving counter and kitchen – an entirely concealed space that doubles as a prep area during functions at the restaurant – is effortless. In the absence of mature trees, white umbrellas shade outdoor diners from the harsh summer sun. Picnics are encouraged on the lawn. The cosy atmosphere of the café may well be tested by the seasonal influx of upcountry visitors and international tourists (tip: arrive early). The evolution of the larger garden, both in height and lushness – as well as the reopening later this year of the suspended retail shop, which focuses on local design – will take some pressure off the more attractive café.

Balancing beauty with self-abnegation is central to the garden additions at Bosjes. ‘You cannot be completely quiet and hide the architecture,’ concedes Steyn, pointing to the slim, dome-like facades and trellises as important lures into the experience of the hidden architectural spaces in the garden. ‘The chapel is a true pavilion, whereas here the buildings and their placement became more like clearances in a forest.’ Retail and catering imperatives notwithstanding, the principal function of these theatrical spaces is to invite pause and contemplative nature worship. ‘I see them as amphitheatres that still the environment around you and amplify the mountains beyond.’ Appreciation of the architecture is, of course, encouraged too.

Sean O’Toole is a Cape Town-based journalist and editor

Bosjes chapel, sitting at the bottom edge of the gently sloping site, is composed almost entirely of a self-supporting concrete roof. Its dramatic undulations, incorporating glass facades, gesture to the theatrical gables of English architect Herbert Baker’s Cape-Dutch Revival style(1892-1912), although that’s only the half of it.

The chapel is located next to the family’s burial plot and is flanked by a small garden with a water feature illustrating the biblical parting of the Red Sea. Steyn adapted the ‘sinuous shape’ of birds in flight that he saw recorded in photographs by Eadweard Muybridge – from his 1887 series on animal locomotion – into a waveform roof that materialises the biblical verse, ‘We find protection under the shadow of your wings’ (Psalm 36:7). Set on a podium and flanked by a reflective water feature on one side, the chapel is unequivocally a thing to be gawped at. It exudes a rakish confidence, as pavilions so often do. But once entered it becomes a reverent – and acoustically charged – space from which to view the abundant landscape. Its glass panes are centrally joined with wooden elements that form crucifixes, fostering a mediated encounter with the landscape.