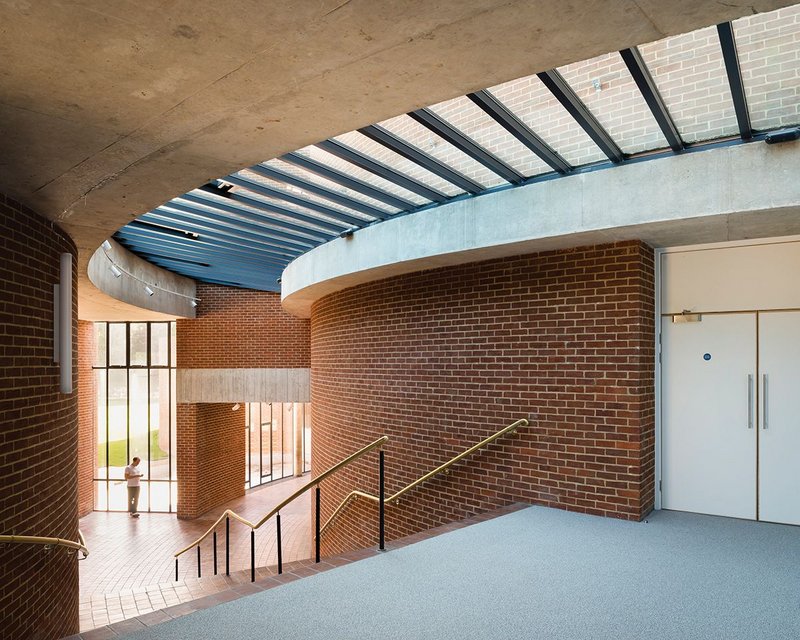 ‘The view back from the stairs up to the chemistry building shows 1960s masterplanning at its best,’ insists Maurice Howard, professor of history of art at the University of Sussex.

He’s right. If you have never been to Sir Basil Spence’s University of Sussex campus, go. It’s an ensemble that despite the hardness of its materials (brick, glass and concrete), has an overall softness – perhaps in part a result of the variety of forms in the landscape. It’s only an eleven minute rail journey from Brighton Station to Falmer. And RH Partnership Architects’ (RHP) refurbishment of the grade II* listed Gardner Arts Centre, recently renamed the Attenborough Centre for the Creative Arts and the final instalment of Spence’s original masterplan, is a good reason to visit now. Better still, the public programme launches in the spring.

After falling derelict in 2007 – when the funds which operated and maintained it pulled out because of the financial crisis – the building remained unused until 2009. The then new chancellor, Sanjeev Bhaskar, decided the university was lacking a creative arts facility. Now funded by the university and community for teaching and events, the building’s original emphasis on bringing culture and the general public to its out-of-town location has been partly modified – from regular big theatre performances to entertaining corporate clients as a way of bolstering the university’s income in these changing funding times. As part of its reopening, however, it was necessary to upgrade the entire building, inserting modern services and bringing thermal, acoustic and accessibility levels into line with today’s standards, at a  cost of £7.2m.

‘Nestled’ is an overused word to describe the cosiness of a building in a landscape, but here it is impossible to find one more appropriate. The university decided early that no building should be taller than the trees: the campus should retain the feel of its earlier 18th-century park and be a series of individual buildings to allow room for expansion. A good 25m away from its nearest neighbour, the Attenborough Centre – completed in 1969 and planned with assistance from architect and stage production designer Sean Kenny – is based on two rings of blind red brick drums. The larger, central drum contains the auditorium, while the lower, surrounding drum comprises circulation and access which is broken up by changing internal levels and five differently-sized turrets.

Selected through the university’s framework, RHP’s overall emphasis has been on making discreet but purposeful changes to improve the building, retaining the rawness of the materials and creating additional space without extending. English Heritage (now Historic England) had opposed any meaningful extension to the building. RHP also rather charmingly reconvened a team which was sensitive to the historical importance of the building, including Arup (which worked on the original construction in the 1960s) as structural engineer and Kier as the contractor, having absorbed the original contractor.

Externally, brickwork has been repointed and repaired, alongside the roofs. Problems stemming from the lack of coping on the parapets (a Spence signature to leave them as just bricks) have been resolved in places by inserting a new cavity tray under the coping.

Meanwhile, the internal changes are also difficult to detect. Apart from the addition of tangerine orange acoustic panels, which cleverly enclose AV equipment and radiators, and the introduction of carpets over the original concrete in the turrets, the building appears to have only been cleaned up – a credit to the sensitivity of RHP’s work.

The ground floor under the auditorium, formerly home to the showers, storage and bar, has been opened up and transformed into a rehearsal studio by major structural work to the levels and acoustic separation of the auditorium floor. The bar has been relocated to the former gallery level, up a flight of stairs from the main entrance, to become part of a new larger café that will be open on a more general basis and kitted out flexibly enough to hold the occasional exhibition or event. Careful replacement of all the windows in the building has allowed the insertion of three double doors to the full-width glazing here, which will enable the café to spill out into the landscape beyond – enlivening a green but quiet landscape that was originally conceived as an open amphitheatre and exhibition park containing Henry Moore sculptures. The new café has also been made more accessible from the entrance by breaking the stair halfway across and adding a lift connecting the levels. A convincing timber-shuttered béton brut wall on the stair side suggests it has always been there. 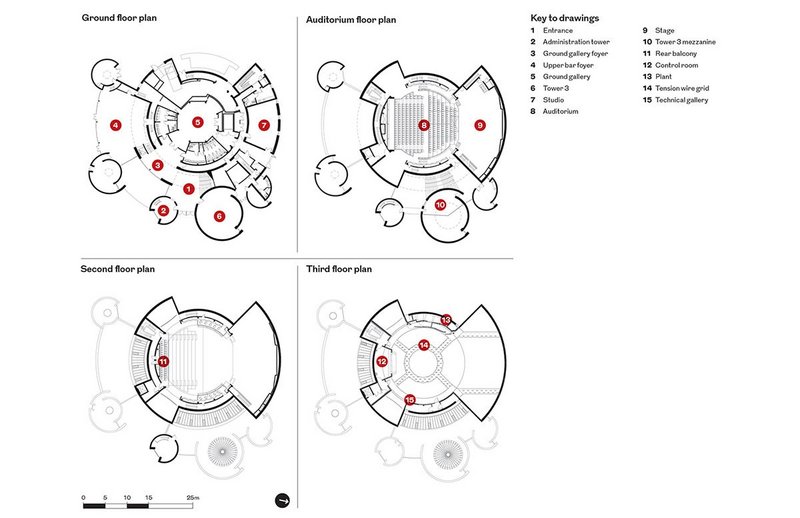 However, the major work has been to the auditorium itself which now comfortably seats 348 rather than the 500 originally rammed in. Acoustics previously compromised by its cylindrical form – where sound reverberated back and forth around the room – have been corrected by inserting acoustic panels in the place of seats in the two wings and replacing the drum’s internal lining with birch ply acoustic boxes; all differently sized to prevent sound focusing in one place. Meanwhile, accessibility and flexibility have been improved by creating new levels, access stairways, retractable seating and even a floor that rises to meet the level of the stage. Above are a new rear balcony and control room as well as changes to the lighting rigs, including the removal of a girder bridge, and additional lining to the roof’s underside.

In all, RHP’s refurbishment has secured the 50-year-old building for the long term, repairing its original faults which probably jeopardised its success both from students’ perspective and commercially. Some parts are, nevertheless, a slight shame – like the way the surrounding shallow water pools which further soften the building in the landscape are only filled up on special occasions, for leakage and health and safety reasons. But for the money, as its latest architect John Bailey says, both as a facility and historical conservation, ‘it represents extremely good value for money’. 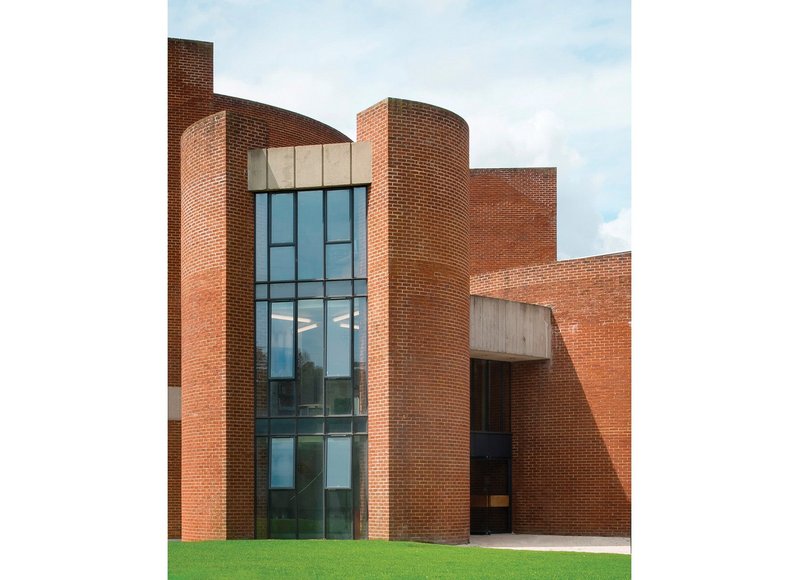