There’s a lot going on at Stonecrop, the house designed by Featherstone Young in rural Rutland. A chunky Clipsham stone buffer wall, cedar cladding, two sweeping green roofs, cantilevered pods, tie-stone projections, unexpected splashes of colour – you name it, this substantial new build has it. In the wrong hands, it could all add up to a bit of a mishmash. Fortunately, Featherstone Young has pulled it off with aplomb. It’s no wonder that the clients, retired doctors Matthew and Nicky Lyttelton, love it. 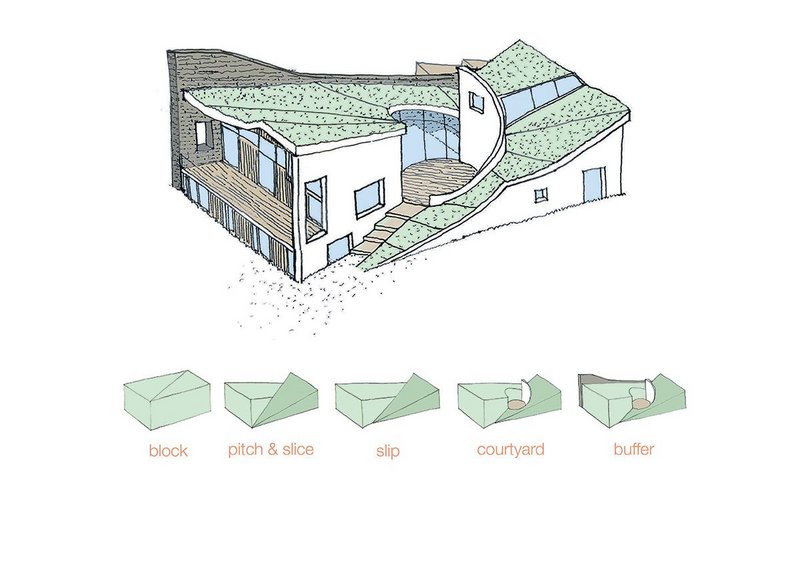 Diagram showing how the two volumes stitch together around the courtyard.

Located in the Rutland village of Wing, a conservation area, the site had its planning challenges. Part of a former garden nursery, it straddled the settlement boundary but was pretty much invisible to the rest of the village since it was tucked away down a single track off the main road. Architect and clients proceeded cautiously, submitting first an online application to establish the principle of residential use before submitting a detailed application that revealed the modern design of the house. The house and its immediate landscaped garden were within the village, positioned hard up against the boundary, while its extensive grounds beyond the boundary were given over to meadow. This strategy ensured a smooth planning process.

At 347m2, the house is sizeable yet announces itself slowly to visitors, who see mainly the relatively modest guest wing on arrival. Walk round to the rear, and it is something of a surprise to see the substantial scale of this elevation, which contains three levels of accommodation and is highly glazed to maximise pleasant views over the meadow and into the countryside beyond.

The clients had some particular requirements in their brief – a separate guest wing, a courtyard, easy access to outside space, a larder and a non-orthogonal design. They got all that, and more. 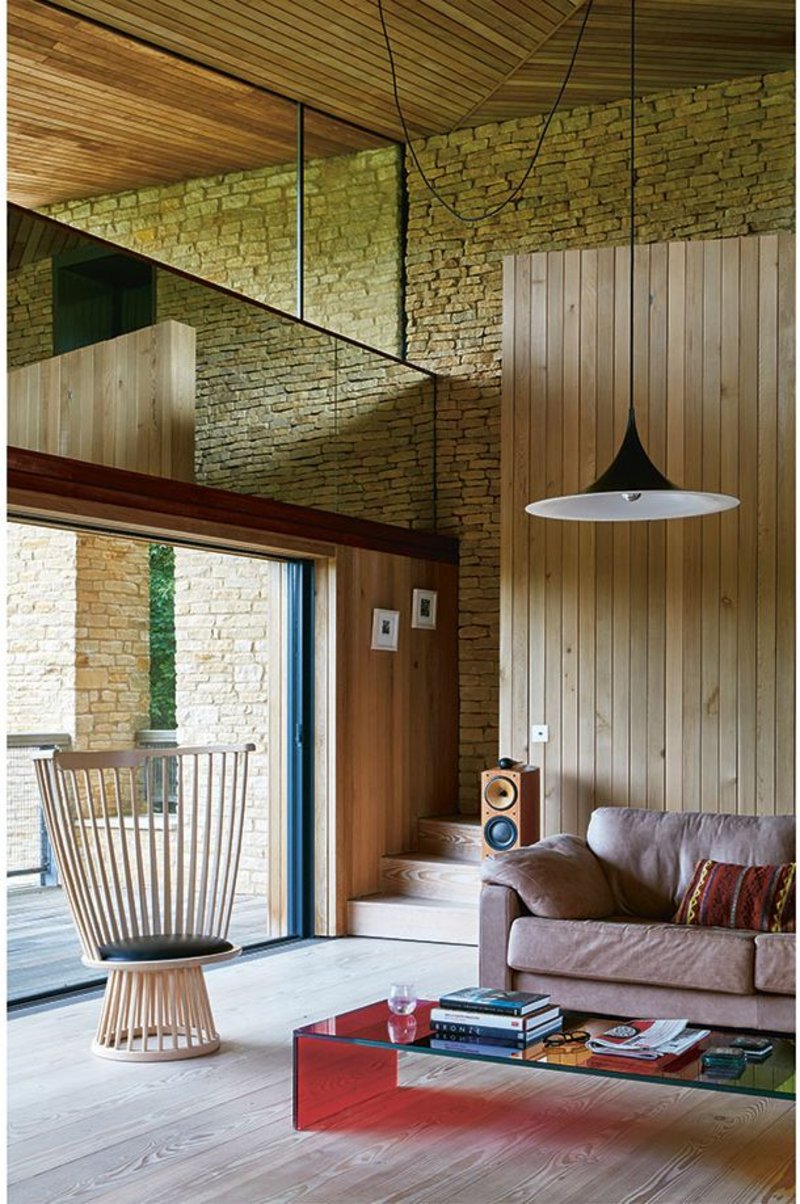 Inside the 5m high lounge. The stairs lead to the eyrie. Credit: James Brittain

The concept started off with an orthogonal arrangement around a courtyard with a 700mm thick stone buffer forming the elevation to the northwest. This was then cut through diagonally to give the two wings, which both have faceted green roofs that swoop down to the ground – pitched in opposite directions – as if the meadow has been lifted up over the house.

The stone wall gives thermal mass and acts as a buffer on the exposed site for both inclement weather and any noise from the adjacent pub car park. This wall is built in Clip­sham limestone – a familiar local material – as part of a hybrid masonry and steel structure.

‘We wanted the buffer to have a solid, more rustic feel to it – more monolithic,’ says architect Sarah Featherstone.

This deliberately coarse element is carried through into the interior side of the wall and is juxtaposed with the other more refined surfaces. These include the white rendered courtyard elevations, the finely dressed ashlar stone on the guest wing and the cedar cladding over the rear, where the main bulk of the house is located behind the guest wing in order to avoid creating the impression of an imposing structure. As a result, even though this is a house of considerable size with a spectacular 5m high living space at the rear, it doesn’t present as such to the outside world. As Featherstone says, ‘it’s not what you think it is’.

In contrast to the relative restraint of the front, rear and opposite side elevation, the buffer wall comes in for a more playful treatment. There are four projecting timber pods cantilevered off the Clipsham wall, which begins as piers at the bottom of the main house’s tapering roof before coalescing into the buffer wall. These projections begin at the entrance with the dog room, followed by the utility and the larder, their positions following the rising levels of the main living space. The fourth is a steel-framed eyrie, located high up at the top western corner. The upwards trajectory of these cantilevers is accentuated by five projecting tie-stones between the eyrie and the kitchen.

There is a surprise when you view this elevation from the rear – each projecting pod, whether the underside of the eyrie or the side projection of the other three pods, is marked by a splash of colour, in different shades of green and blue Trespa cladding. There could have been a danger that this would all be too much combined with everything else that’s going on here. But in reality, these little flourishes work well – and in any case, tucked away as they are, these are something of a private pleasure for those who live there.

Inside, the star of the show is the main living space, which flows up through the house to the rear, taking in two short flights of steps, and unified by the cedar-clad, faceted ceiling that gives an important visual warmth to the soaring space.

‘This gave us the opportunity to dip down and dip up to suit whatever was happening underneath, and gives a more organic feel,’ says Featherstone. This single space is divided into areas by partitions that deliberately don’t meet the ceiling – they are conceived as furniture rather than static walls. Each is finished in progressing shades of high gloss red – the architects were going for a jewel-like effect. The first burgundy screen encloses a toilet cubicle in the entrance lobby which is glass topped to give enclosure without touching the cedar. This is carried through to the outside where the splash of colour signals the main entrance to the side of the guest wing. The next screen divides the lobby from the kitchen, while a third contains a two-way wood-burning stove and divides the bespoke kitchen from the rest of the living area. The stove’s flue is the only element that touches the roof.

The rear is awash with natural light and opens onto a full width balcony under an overhanging roof. To the left, sliding partitions can be used to divide off a separate area originally conceived as a music room but now occupied by a loom. A small door opens to reveal not a cupboard but a staircase up to a mezzanine overlooking the living area. With extensive rear glazing, this makes for an enviable office space with great views and copious amounts of built-in storage.

On the other side, another staircase leads to a delightful den. This is the eyrie – fitted out in jaunty green leatherette built-in seating, it is a cosy space with its own wood burner and was conceived as a tree house because of its proximity to the trees at the edge of the site, affording plenty of bird-watching opportunities.

The lower rear accommodation is tucked under the main living space and reached down a lofty stairwell off the kitchen. After some initial misgivings, the clients have got used to going down, rather than up, to their bedroom and now love the sensation of looking out at eye-level over the meadow. This lower level includes a second bedroom, cellar and plant room to coordinate hybrid heating sources including ground source heat pumps and solar thermals.

The guest wing provides two further bedrooms on the ground floor with a third at first floor level. This can be opened up when required and otherwise remain unheated.

Between the two wings is the sheltered courtyard, a popular outdoor eating spot along with the rear balcony. A kitchen garden is located near the entrance with a more landscaped garden to the east.

With its lofty proportions and open plan arrangement, this space could have felt a bit overwhelming for two people. It’s turned out to be anything but, thanks to the warmth and variety of the materials, the scope for displaying artwork and ephemera, and the interest created by the array of screens, hidden staircases and cosy nooks and crannies.

Certainly the clients are enjoying both the house and the generous garden, which is keeping them busy in retirement. They have easily adapted to the free-flowing space, which is a sharp contrast to their far more traditional former home.

‘The effect of the different levels and screens means that in a lot of ways, it doesn’t feel open plan,’ says Matthew. Nicky adds: ‘It’s such a useful space. It can be a party space or really quite cosy. It’s been a joy to live in.’

And for the architects, Stonecrop is part of the practice’s continuing wider interest in creating new housing in villages without sprawl and by doing so helping to revitalise declining rural communities.