Carefully inserted into a beautiful landscape, Studio Weave's thoughtful Midden Studio is designed to weather naturally with its surroundings 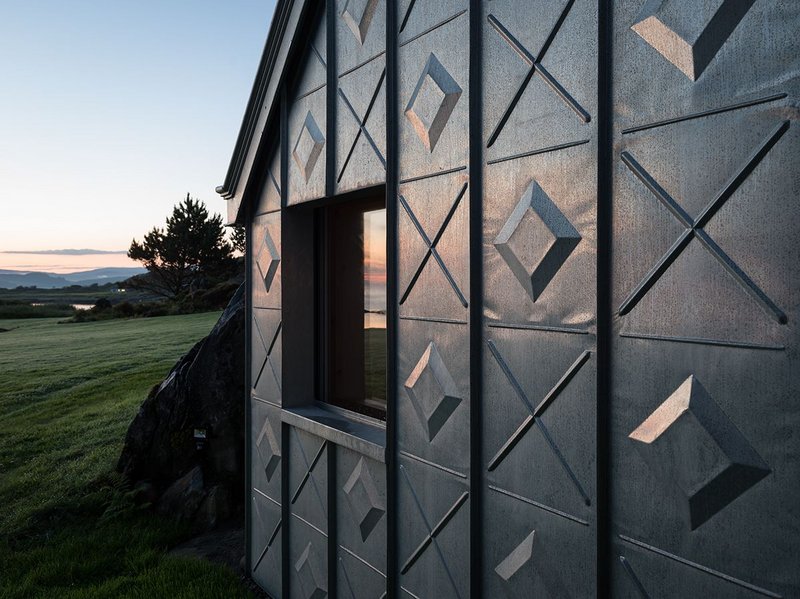 The diamonds and crosses embossing has been inspired by the 'powerful' decorative facade at Chiesa del Gesu Nuova in Naples. Credit: Johnny Barrington

Studio Weave’s Midden Studio is a tiny 36m2 repository of architectural ideas, full of commentaries and references, inserted into a secluded sparse landscape on a landed estate on the west coast of Scotland. Far from being a simple artist’s ‘void’ – one that fills, fittingly,  the space within an ancient retaining wall for horse dung – this chapel to tinny-ness is far more than a one-line statement. Neither will its impact pop or evaporate like some of its bolder architectural ancestors.

Perhaps this is down to the long incubation period – or the way it remained tied to local planning etiquette – but the process was protracted, allowing room to luxuriate in investigation and soak up local affairs.

‘It had a long gestation which has been good for the building,’ explains project architect Eddie Blake, formerly of Studio Weave, now of Sam Jacob Studio. ‘It has come out more finely tuned and mature.’

Built for an artist whose work draws on the relationship of people with the landscape, the project started more than four years ago. It was commissioned through a personal connection in a patronal fashion – an established practitioner in drawing and digital work looking to support a developing architectural firm. The brief was open – it didn’t even have a position on the site. Consequently, the first job was a feasibility study – a phrase which does not do the sensitivity of Studio Weave’s initial investigations justice, sounding far too commercial and financial. Rather, the architect listened to the sounds of the sea and stream, observed the colours of the granite, took in the views of the bay from the manor and explored forgotten structures.

In the end, the retaining wall of the midden for the nearby stables was identified as the site containing the most beautiful composition of things – trickling water from the burn (stream), exposed rock and Victorian vernacular. In an area of scenic beauty, the architect set about refocusing the site, making incisions and light excavations to discover the extent of the old wall before drawing up any plans.

The final form is an appreciation of the toughness of the landscape. Its twin peaks sit on top of the wall, cantilevering over the stream. The height and double ridge were determined in part by permitted development rights, but also by the layout within and by Blake’s interest in Heidegger’s concept of uncanniness. Its zinc cladding will weather directionally, becoming whiter and less metallic over time. Blake explains: ‘We wanted the building to be another object in the landscape so we were looking for a material which dealt with the wall and roof at once.’

The zinc also allowed for a decorative surface, and it is here that Blake most markedly imprinted his personal stamp. Working on it at the time of the Scottish referendum prompted him to think about Scotland’s relationship with the EU and the reigniting of Scotland’s tradition of looking to Europe; the diamond and cross embossing is inspired by the ‘decorative but powerful’ facade of the 16th century Chiesa del Gesu Nuova in Naples – one of Blake’s favourite buildings and thought to have influenced an extension to Crichton Castle near Edinburgh.

For all its external thought, however, Midden Studio is about being inside. Cold and hard on the outside, if you crack the building open, it is warm and cosy within.