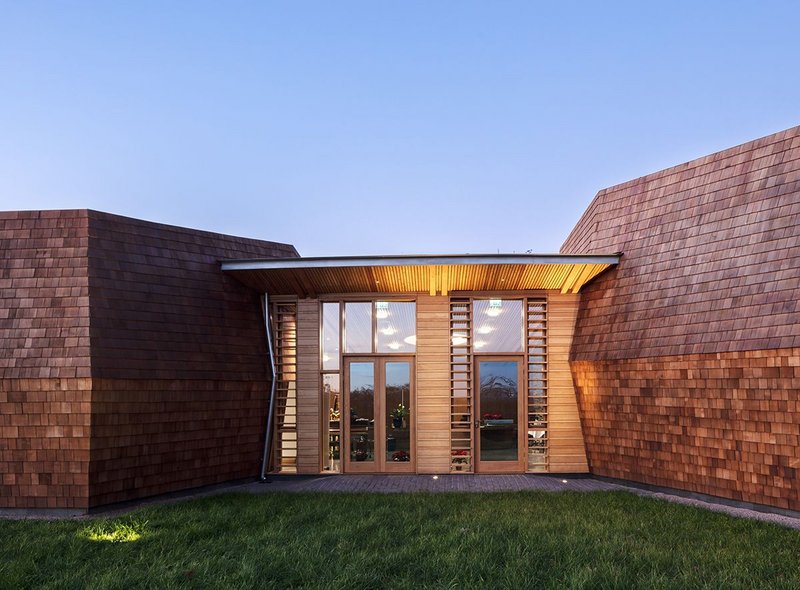 A carefully calculated area of louvres are used to create interest in the deep facade. Credit: Simon Kennedy

It is hard not to start the story of Sunbeams music centre with Annie Mawson. It is, after all, Annie Mawson’s Sunbeams. She set up the charity for music therapy in the 90s, taking her harp out to disabled children, singing with them and using instruments to draw out the language and involvement that was sometimes hard to reach. To raise money she held concerts, using Cumbrian traditions and telling stories. The charity grew. Its new home, its first ever, is full of stories of the children who have used it and found themselves, and of the donors, trustees, musicians and subbies that built it who have been touched by those stories.

Sunbeams is also the story of young Newcastle practice Mawson Kerr, and particularly Will Mawson. He borrowed his aunt’s charity for a thesis project and studied it and its needs and musical therapy to come up with designs. His walls of thesis drawings caught Annie’s im agination and she set to work to realise them, where others would have seen an impossible task. First for a grand shed, then something larger for the site, then with a new green field by the edge of the A66 outside Penrith in Cumbria, a grand plan for a concert hall and therapy rooms. Her trustees nodded it through, perhaps thinking it would never get anywhere, but the land got donated and so too did the £2 million needed to build the core of this project. Will Mawson took the project into Napper Architects where he was then working, then out again as recession hit.

But I went to see Sunbeams not because of the stories but because of the architecture. So what have the two Mawsons and all their collaborators brought to life? The centre is dug into a gently sloping site against the busy A66 on one side and pushes out into the landscape on the other with facetted cedar shingled volumes for the significant spaces of therapy rooms and concert hall. The cedar shell drops rigorously down into the building with some surprising consequences – so the admin office has shingles on one wall and one escape route becomes an unconventionally attractive space, again thanks to the shingles. A beautiful Cumbrian slate wall runs solidly through the length of the building, while it edges the green roof above to give the sense of another, rougher, field amid the surrounding grass. The importance of natural materials was one of the things Will Mawson drew from his exploration of Rudolf Steiner inspired architecture.

The geometry of the building is unconventional, again the curves draw on Steiner thinking. But there is a lot in here, like the  ‘columns’ (to avoid collisions with the doors) lined up and doubled up Aalto-style. There are parallels with Gareth Hoskins’ Robin House Hospice in Loch Lomond and the Trossachs National Park – in the situation, the timber and reaching out into the landscape. And Will Mawson has enjoyed a little structural play that enlivens the larger spaces. A composition of glulams and steel ties bisect a circular rooflight in the large-scale foyer; there’s an almost musical play of columns on an equally generous canopy, which continue as harmonious sounding posts dotted around into the garden beyond. A vibrant planted wall at the entrance between the two is unexpectedly magical for a draft lobby. 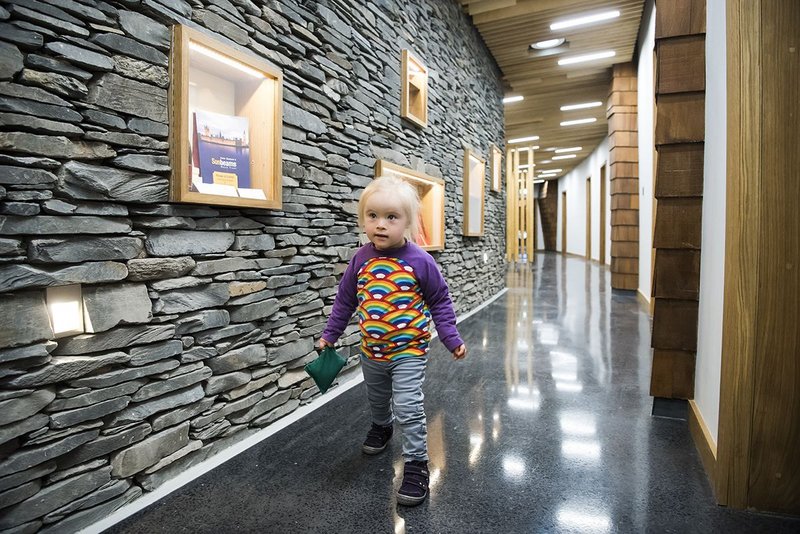 One user in a corridor of stories. Credit: Philip Rigby

There was plenty of time to talk about the materials and ideas of the architecture as the design developed and funds were raised. But even as the builders started Will Mawson was asking his aunt and fellow Sunbeams director Michael Lawson-Johnson if this was really what they wanted. With an idiosyncratic and passionate client (and fond aunt) to satisfy, this was not a project with a signed off client brief – which left room for uncertainty. A few months on the charity is still delighted with its new space, views and the opportunities it brings. But it is clear that it will take time to grow into. The charity is busy, with over 50 projects – most of which will continue to be based in schools and homes. Even the regular programming of autistic children on Monday, Songs and Scones for alzheimer’s sufferers on Tues, etc, can leave the facility less than fully used. And quite how it is used also needs to settle. The free-flowing spaces seem perfect for Annie Mawson’s very personal way of working but as the organisation grows, more separation between arriving groups and the office and admin may be needed.

What is not lacking is space. The foyer lends an oversized sense of scale to the building. To one side is Glassical Hall (named for trustee Philip Glass); this can take an audience of 120 but also works for a smaller ring of children, parents and musicians, as I saw on my visit, or for dancers along the barres at the end. The suite of smaller rooms on the other side of the foyer creates more concentrated, intense spaces. The first is a sensory room of gentle lights and sounds. At the centre of the plan a high roof light makes a vertical space that pulls you out of yourself, from the astroturfed floor up. Sandwiched in between is a recording studio – seriously separated and insulated acoustically. It is one of the spaces that is already in demand for hire, which will be important to generating some extra revenue.

The form and detail on Sunbeams music centre give away that this was a personal project with little value engineering. The protruding volumes may have morphed to rather more facetted shapes than the original eggs and there is no sense of excessive architectural indulgence, but the carry through on some elements (such as shingles coming into the building) would have been lost on more conventionally procured projects. Tougher questioning early on might have made a more taut project – this has had architectural, spatial and organisational leeway. However, it has avoided the institutional and material meanness of many education, charity and healthcare buildings. It fits more into the cultural mould: generous, as its work is, in bringing out the best in people, adding an enriching dimension to their lives. From fund raising to materials, it is deeply rooted in Cumbria.

Will Mawson, knowing Annie Mawson’s propensity for stories, has built them in, little vitrines along the slate wall, a place for mementos and prompts that naturally fill in  for the many visitors the stories of the powerful effect of Philip Glass’ music on one little girl, or how Gareth Malone came to record the 2014 Children in Need song with Sunbeam children, which gave them an official chart topping single. The whole building speaks of this deep understanding of the client and charity; the power invested in design by familiarity cannot be underestimated.