Look, no annexe: Herzog and de Meuron’s greatest success at Tate Modern is the way it completes and makes a single whole of the gallery 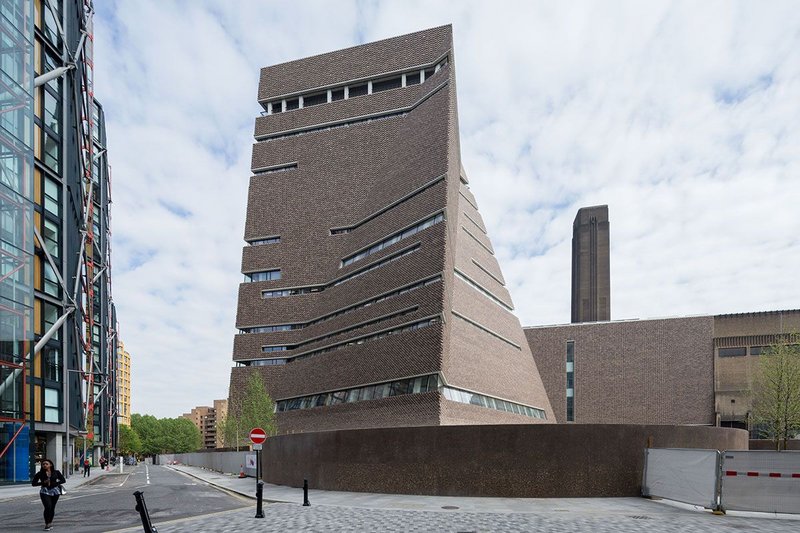 It's totemic all right but the loose-knit perforated brick cladding is very different to the conventional brickwork on the old power station. Credit: Iwan Baan

Slubby loose-knit brickwork on the outside, raw concrete on the inside, galleries where there used to be transformers, an impressive bank of lifts, an even more impressive concrete curving staircase, restaurants, bars, a new south entrance and a very well-sited open observation deck – these are the raw ingredients of the newly expanded Tate Modern.

The first thing to be aware of is that this £260m development is about a lot more than the ziggurat (or warped truncated pyramid if you prefer) that has sprouted at the back of Sir Giles Gilbert Scott’s former Bankside power station and dominates all the photos. That is in a way a glorified service tower, plugging its vertical circulation and ancillary facilities into the back of the old building. But in terms of new galleries, the bulk of the floorspace is not in the ziggurat, rather in the south side of the power station where previously there was nothing available to the public.

When Tate Modern opened in 2000, it hummed quite loudly, as everyone noticed in the huge open space of the former turbine hall. This was because – although the building had ceased to generate power much earlier – all the old National Grid transformers and switchgear, serving the city of London, were still connected and working. As a result, nearly a third of the total volume of the building on the south side was out of bounds. Now the electrical equipment has been upgraded and needs much less space. So half of that southern slice of the original building has been taken over by the Tate, plus the three circular former oil tanks at basement level first revealed in 2012, above which the new ziggurat has been built in a forest of angled columns. It adds up to a larger and better balanced Tate Modern, and the hum has gone.

As to whether it works aesthetically – that’s a matter of opinion. Are you a brick purist? If so you might not like the way brick is used in perforated fashion to clad the ziggurat – essentially used as a net pulled tight around the underlying largely precast concrete structure. Each lump in this facade consists of two square-plan bricks mortared together and fixed to the next lump by concealed dowels. Slight movement can take place across the net, which means there are no ugly expansion joints. Jacques Herzog of architect Herzog and de Meuron likens this brick facade to knitwear. One consequence of this is that, where the brickwork follows the sharp creases in the concrete structure, its lumpiness makes an uneven profile – presumably a design decision, and it’s not unpleasing, this roughness. The same brickwork treatment continues on the rear facade of the old power station, marking where the new galleries lurk within. In case you wondered, the holes in the brickwork are just too small to attract pigeons and anyway, peregrine falcons roost elsewhere in Tate Modern and are a powerful deterrent. Occasionally a man with a hawk comes to finish the job.

I’m reasonably OK with the external appearance of this extension, less so with its interior, where the concrete structure is exposed. It’s all a bit awkward and messy, especially where opening windows with remote-controlled actuators are inserted in it behind the perforated brick, and given surprisingly clumsy metal frames. They are there because the much of the new extension is naturally ventilated, though not the galleries themselves. You want them to be more refined.

But the spaces within the ziggurat work well, especially where the height is exploited by pulling back two of the floor slabs to make an atrium. Though beefing up Tate Modern’s notoriously overwhelmed vertical circulation was clearly paramount in the brief – the bank of lifts here is worthy of a corporate lobby at Canary Wharf, so the cores and circulation space takes up a huge amount of the plan – there are sizeable spaces here too, including new restaurants and a Friends’ Room, plus an experiment in community engagement known as Tate Exchange. Meanwhile the three floors of new galleries – the largest of which is 15m wide and 64m long and divided into two rooms for the opening exhibition – are linked to existing galleries on the far side of the turbine hall by a new bridge at fourth-floor level.

All this culminates in the viewing gallery, expressed as an open slot near the top of the ziggurat. At 60m up, this peers over the old power station, giving the best view yet of the flank of St Paul’s cathedral to the north. The gallery runs right round, so you have a prospect of south London too. Many visitors, as at the Pompidou Centre in Paris, will surely head straight for this platform and leave without exploring the art within. In several ways then, the ziggurat is a pressure-relief valve for the main building.

The other key move is the way Tate Modern at last has a public south face and entrance, complete with large bar and shop. This new permeability means you can traverse the building from south to north. 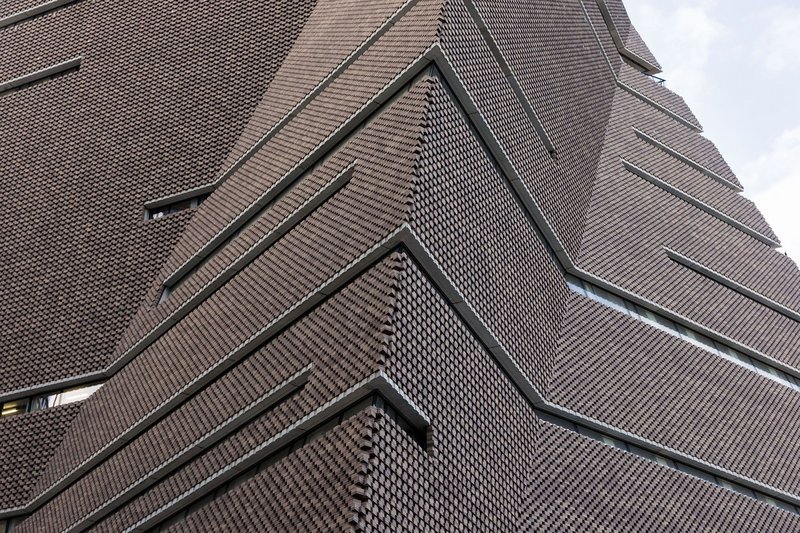 Finally, this is a rare example of an art museum’s original architect being called back, here to extend the building it first designed in the mid 1990s. The new interiors are consciously in the semi-industrial language of the originals, though here the fetish is raw concrete rather than inherited riveted steel. Tate director Sir Nicholas Serota is keen to point out how, once inside, the whole place feels as one – there is no sense of nipping sideways into an annexe. The way the new building dovetails into the old is key to this.

As an exercise in planning and circulation, the new Tate Modern is exemplary. The new galleries and public rooms look promising. The expression of the architecture – that skewed sandwich of concrete and brick – may be generated by site constraints, but has a tortured, contrived feel that will take some getting used to. But get used to it we will – and happily, if it fixes the problem of Tate Modern’s own success: the crowds.

The revamped Tate Modern opens to the public on 17 June