If the problems for cities are density and congestion, villages are troubled by supermarkets and farm shops luring shoppers away for their groceries and local pubs propped up by just a few stoic drinkers, exposing the grubby carpets and smoked-yellowed walls. Temple Cloud in Somerset was no exception. Its local Temple Inn was struggling – so a different approach was needed.

The housing around this, named Temple Gardens, is the second project for Bath and Stratford Homes, the development arm of Red Oak Taverns which took on the pub – one of a batch of 30 – from liquidators. Temple Inn had been closed on and off for a couple of years and the 1,300 population of Temple Cloud meant that it was barely sustainable simply as a pub. Red Oak’s plan is to make Temple Inn a place to stay and to eat as well as to have a pint. That meant building rooms as well as reroofing and refitting the pub.

Co-founder of Red Oak and the client at Bath and Stratford Homes, Mark Grunnell, explains the importance of using vacant land not just to create capital to reinvest in the business but also to make better places. ‘It is important to us as a community pub business,’ he says.

This makes Temple Gardens an extra part of the village, rather than a housing estate

Temple Inn’s Georgian facade faces a cross roads of the A37, an old route between Bristol and the South West and still busy with lorries whistling past the houses that line the road. Alongside it was a large car park plus an old barn housing a skittle alley and store, a pub garden and scrub land; a space of opportunity. Bath and Stratford Homes brought along small practice Archio, which it had collaborated with on a pub site in Warwickshire and which it continues to work with, to look at how to do more with the site.

Fitting homes onto the 0.34ha corner site was not going to be a problem but with 70 unremarkable dwellings by David Wilson Homes just completed across the road and a 17th century, grade II-listed pub on site, the conservation officer wanted to ensure this development worked harder for the village. Archio was happy to respond. As we enter Temple Combe, its director Kyle Buchanan pulls out a little map to show some of his precedents and we trace them: strong window surrounds, long roof lines, asymmetric windows, dormers in the eaves, courtyards and cottage gable ends facing on the road.

The layout of the nine houses draws on these lessons and defies the sense of a single development. Two larger houses face their gable ends on to a quieter road, the barn is sawn into two interlocking homes and there is a short terrace of five houses (some three bed, some four) with their small gardens backing onto the field behind the site. Alongside the A37 runs a series of letting rooms for the inn, corridors road-side with plenty of sound insulation. The rooms look out onto (and protect) a little green, as the terrace and the homes in the barn gather around it. This is what draws it all together and makes Temple Gardens an extra part of the village, rather than a housing estate.

The layering of public and private is handled particularly well with the houses around this green. Letting rooms have a defensive hedge and border on one side of the green and the green itself is edged by stone walls which become seat or planter. A walkway takes people to their front doors and indented porches while front windows – some kitchens, some living rooms – are defended by brick planters. Paths and edges feel strong here. Roads and cars – and parking – are relegated to the side, giving the green a far more neighbourly feel (conversely the semi-detached pair have a more awkward relationship with each other and the street due to having parking right in front of the kitchen window).

You can tell this was a traditional contract by the stones and benches, by the characterful dormer windows and by the gutters. These are done elegantly and well. Gutters are semi-recessed into the brickwork, scoring lines down the facades in aluminium. And the materials make a major difference. The limestone of the pub frontage is taken up on the adjoining elevation, with a local limestone cladding the letting rooms with brick plinth, but elsewhere brick is used – argued as local thanks to the brickworks that was once over the road – with highlights of cast stone in the oversized window surrounds. ‘Which we spent, frankly, quite a lot of money on,’ says Grunnell. It is a difficult call. ‘We’re not very high end,’ he says. ‘Our houses are for sale at a similar price to a national housebuilders’.

From outside the houses look small but the immediate impression is of spaciousness as you step through the high front door. ­Ceilings are 2.5m high and hallways are wide (enough for a pushchair or bike, something Buchanan, as a father of young children, is alive to). Staircases in the new houses are generally in the centre of the plan, some toplit to give an unexpected drama at the centre of the little houses. Bedrooms in attic storeys with dormers and sometimes a slit window to the side make for the sort of bedroom you would dream of as a child.

There is a sense that Archio may have smuggled in an extra window or two, without quite realising it was being generous. The box-room in one house, with barely any headroom, has a rooflight that would make it a tidy little study, elsewhere a rogue rooflight looks onto next door’s tiles rather than out to the sky as it might. And the plan size of the semis (a ground floor of 43m²) means the scale bet­ween rooms favours those whose families spend more time in their bedrooms: at three storeys they have four bedrooms, but the kitchen and living room would struggle to hold guests as well as all the occupants, and have gardens that could barely squeeze in five deck chairs.

How the cheek-by-jowl village qualities will appeal to buyers has yet to be tested. But one of the compact three-bed terraces looking out at the field one way and a neighbourly green and a thriving pub the other, seems a pretty good entry point to village life – very different from the suburban development over the road. And for the pub owners with a long term stake as a next door neighbour and local business there is every reason to hope Temple Gardens will bring new life to ­Temple Cloud. 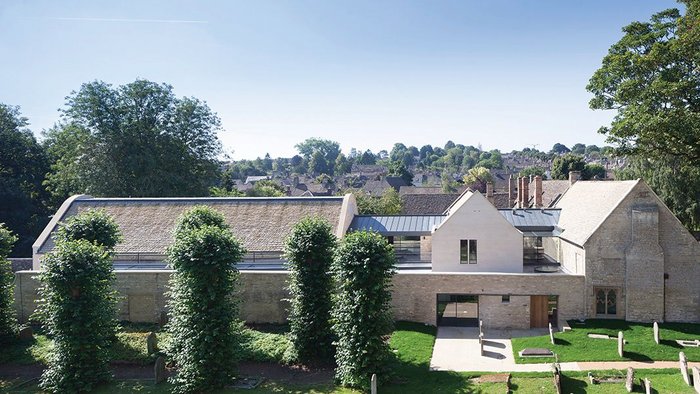 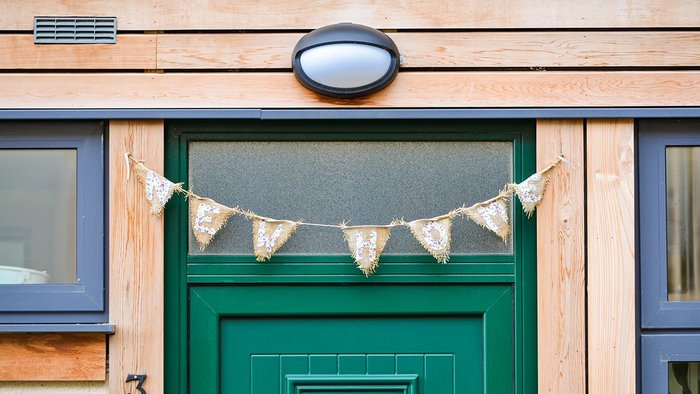 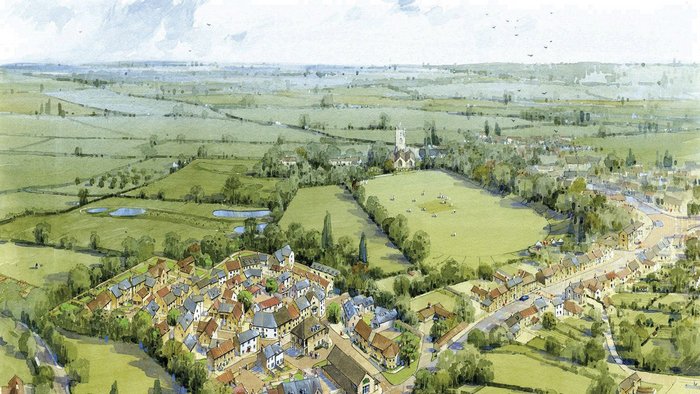