It’s the roof that makes a splash at Heathrow’s latest building, its wave-like form lapping the runway edge 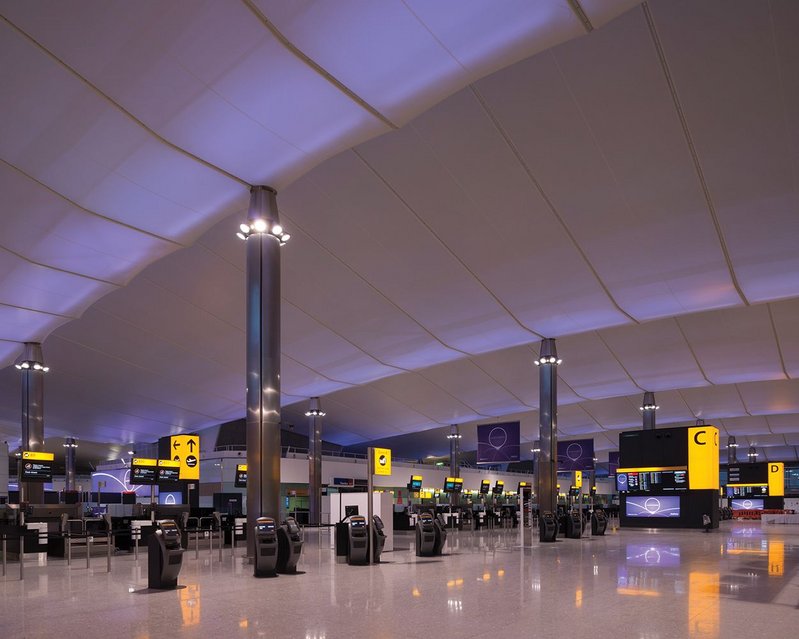 If you think that artist Richard Wilson’s aluminium sculpture Slipstream, hanging in the entrance court of the new £2.5bn Heathrow Terminal 2, is the building’s pièce de résistance, then you might want to direct your eyes a little further to the skies. The 70m long sculpture springing off the forecourt’s columns might be a frozen representation of the twisting acrobatics of a stunt plane, but there are other, no less complex gymnastics on the terminal’s 50,000m2 roof. From an aircraft window, a repeating form of aluminium waves ripple over the whole surface of the new Queen’s Terminal, seeming to lap gently across a quarter of what is one of the world’s busiest airports.

For architect Luis Vidal, appointed by Heathrow’s Spanish owner Ferrovial to take up the terminal design where the Foster+Partners masterplan left off, Terminal 2, which opened last month and will handle 20m passengers a year, has the latest version of a roofing strategy that the firm’s been developing for the last 10 years. This is the first UK building for Vidal, who studied and qualified here, but its curving steel roof structure form has been seen in other of the firm’s airports – notably Zaragoza, Reus and A Coruña in Spain. ‘At these airports, the curves aren’t capricious, they have a function,’ Vidal explains, emphasising that this is about more than wilful formalism. ‘Obviously the arch is perfect to bridge large spans, but it also does something else – pull north light deep into the building, mitigate solar gain and drastically reduce the cooling load of the building, especially in a climate like Spain’s. But at Heathrow there’s a third reason. We wanted the wavy form to be a core part of intuitive wayfinding for the terminal.’ The firm was keen to make it a component of this strategy.  ‘We want the travellers’ sense of this to be subliminal without recourse, if possible, to signage or clumsy spatial moves,’ he adds.  In this way, Vidal says, users can move fluidly from check-in areas, through security and into the international departure lounge (IDL) subtley guided by the roof.

This undulating steel and glazed wave form crowns a five storey, roughly square floor plate of 200m by 220m, providing in total almost 200,000m2 of terminal area. This is divided into an 18m by 18m steel structural grid on the customer-facing levels, reducing to a 9m by 9m concrete grid at lower servicing areas. Both these grid dimensions are optimised with respect to security areas equipment and baggage handling machinery. Central structural columns are 356mm in diameter, increasing to 610mm at the perimeter. Vidal explains that the final construction approach was very much dictated by existing site constraints, which affected logistics. The terminal’s maximum height was dictated by the visual line of the control tower and its need to see the tail fins of taxiing aircraft. Also, London Underground’s Piccadilly Line runs just a few metres below the surface, and there was the proximity of Terminals 1 and 3 to consider. Vidal says all these constraints pushed the design team towards ‘making the structure work hard for us’ and adopting, as much as possible, a pre-fabricated approach. ‘That meant all the structural elements, even service cores and M&E, were effectively brought here in small pieces, bolted together and erected on site,’ he says.

The 5,000t roof structure is constructed from 18m long curved sections creating enormous Vierendeel trusses that form three curved sections running east to west along the length of the terminal. As the depth increases along the length to 4.5m, the space between the elements is filled with clerestory glazing forming the north rooflights.  Trusses, bearing on their steel structural columns, are linked via 1m deep secondary trusses spaced at 4.5m centres, which are in turn cross-braced to give the whole structure lateral and torsional rigidity. Inclined supports come off the lower chord of the Vierendeel truss to bear the north south lateral loads; the rooflight glazing follows the geometry of these inclined bracing supports.

According to the firm, the effect of the wash of natural daylight is very different to that experienced at other terminals where roofs are more solid, punctuated by openings. Here, the 18m northern skylights not only provide good daylight across the whole floor plate and reduce contrast ratios, but also produce an evenly lit soffit surface. For this, a key decision ensured that all air handling services were concentrated in the cabins via their service risers, obviating the need for these to interfere visually with the soffit. Luis Vidal partner on T2, Oscar Torrejón, says early aircraft inspired the internal aesthetic of the roof: the firm took the concept of their fabric wings and translated it to a taut white material stretched along the surface of the secondary trusses. The effect this has on the roof soffit is a fundamental aspect of the design, detailed so that north light bleeds into the interstitial 1m structural zone and creates the translucent soffit effect, producing ‘an essential feature for the visual comfort of the terminal user,’ says Torrejón. The translucent soffit below helps to spread, diffuse and reflect light into the space, softening the contrast between the roof light and the surface below it.

This was more difficult than you might think. Luis Vidal Architects worked with lighting designer Studio Fractal, which had consulted on the lighting for T4, on both a strategic overview of lighting for all of T2 as well as the detail design of LED lighting fitted in the secondary structure zone, above the fabric ceiling. The key is the relationship of the bullnose of the fabric soffit with the structural beams. This, explains Studio Fractal senior partner Tim Downey, is manifested by the steel columns that pierce the fabric membrane slightly back from this edge to engage with the beams. ‘The trick was to try and dematerialise the structure, to give the roof lightness, and the lighting, we think, achieves that. Over 1,800 LED strip light fittings were run within this bullnose, hiding the fittings themselves,’ he says.

For maintenance purposes, LEDs are mounted on a sliding mechanism around a cocking pin and can be changed if necessary. With the fabric very translucent, partially the result of  more perforations to give it better acoustic qualities, and the LED strong point sources, they used an opal perspex diffuser along the bottom edge. This directs light up rather than down, softening the illumination effect. Downey saying there is a dark edge at the bullnose but light bleeds across the surface sufficiently well to have a subtle effect even here. And it’s not  just white light – all fixtures are connected to a computer sensor that monitors the natural light outside and emulates the light colour internally with the LEDs, producing a constantly modulating surface that changes subtly from dawn until dusk.  ‘The roof soffit changes colour according to the time of day and at any time might look solid or transparent,’ says Downey. ‘It’s a fantastic effect.’

How the new Queen’s Terminal stands up design-wise against the more dramatic Terminal 5 remains to be seen – T2, the designers concede, has less of a ‘wow’ factor, being more understated. Whether the roof design creates an intuitive intelligibility for the user only time will tell, but with two very different and dramatic aspects, depending on which way you look at it, there’s no denying that the design has produced a striking effect that allows light, both natural and artificial, to pour deep into the building plan in strange and unexpected ways. Not only that, but it was, Vidal concludes, vital to earning this usually profligate typology its BREEAM Excellent certification. •