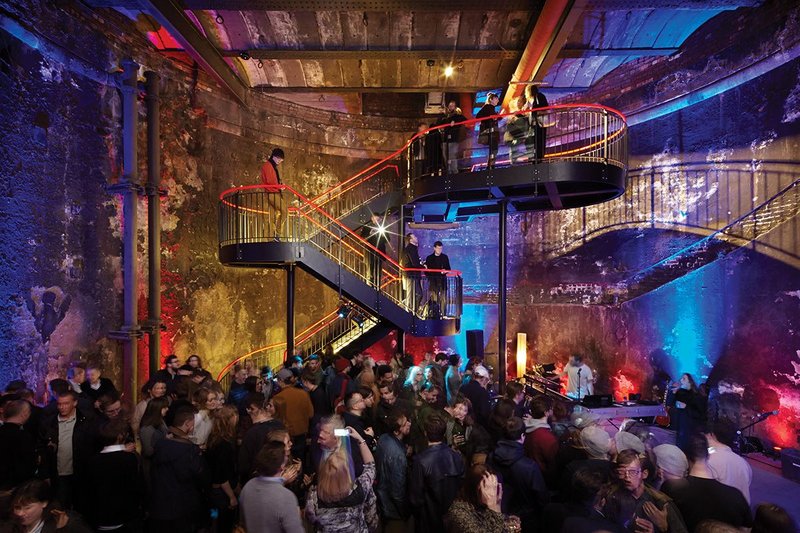 It seems a fitting irony that the 50ft cylindrical access shaft used to help construct the Brunels’ pioneering 1825 Thames Tunnel – and which became part of a Victorian tourist trap – should have ended up as a rave venue; accessed by punters, Jack Hobhouse tells me, via its old steel access door cut into the earth beside the banks of the river. A concrete slab now separates it from trains running in the tunnel below: its acoustic damping qualities and subterranean nature would have made it a shoo-in for nefarious latterday antics much as the original tunnel did, once the initial thrill of the feat had waned.

Hobhouse’s photo is a palimpsest; a modern, staged echo of that historical hedonism at an invite-only event to mark architect Tate Harmer’s completion of its intervention on the shaft. This is a new black access stair, replete with dayglo orange handrail, guiding visitors to its floor. Like the engineering, the photo was meeting a technical challenge, simultaneously using a long exposure to register the depth and texture of its soot-stained circumference and a professional flash to freeze the architect guests’ motion. Hobhouse was ultimately transfixed by the party-goer on the stair, the flash of his phone echoing his own; a visual Doppler effect augmenting his efforts to mark the rotunda’s red and blue shifts.