Some controversial decisions attended John McAslan and Partners’ renovation of Glasgow’s Burrell Collection. Do the improvements outweigh the perceived drawbacks?

The Burrell Collection in Glasgow has reopened to the public following a five year renovation led by John McAslan and Partners. The building had been suffering from myriad issues that required attention, but the scheme has been called into question due to its reconfiguration, which threatened the fundamental qualities that made it one of the best modern buildings in Scotland.

An open RIBA competition was held in 1972 to design a new home for the art collection of wealthy shipping magnate Sir William Burrell and his wife Constance. Won by young Cambridge architects Barry Gasson, John Meunier and Brit Andresen, the new gallery would go on to house 9,000 objects considered by many to be the best private collection of its type in the world.

Glasgow loves its civic architecture and embraced The Burrell Collection with enthusiasm upon its opening in 1983. The new gallery eschewed fashion; critic Jonathan Glancey wrote at the time that it ‘will never be in or out of vogue – it is a silent, timeless, reticent servant’. It was an intelligent and sensitive piece of architecture that succeeded with a quiet authority; managing the experience of arrival through a sequence of spaces culminating in the seminal ‘walk in the woods’ gallery. Here the art objects were set on plinths against a glazed wall with the wooded northern edge of Pollok Park providing an ever-changing backdrop. 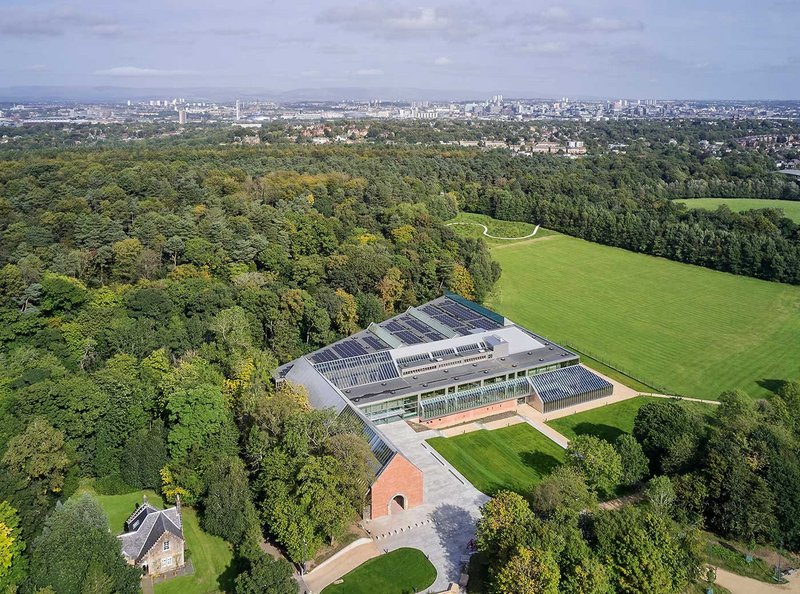 The Burrell Collection. From above it is clear how the galleries to the north sit alongside the woodland edge. Credit: Dylan Nardini

In 2013, immediately upon being eligible, the Burrell Collection was Category A-listed – the highest protection available. However, the space had fallen from the public consciousness and visitor numbers were down, to 150,000 per year from over a million in its prime.

The Burrell’s fabric faults were consistent with a building of its time; low levels of insulation; overheating from too much south facing glass; poor energy efficiency; and leaking flat roofs a particular problem with tarpaulins and buckets a regular sight. These faults affected the exhibitions too, with only a small collection on display due to the poor conditions; and a lack of flexibility in the galleries’ environment meant the exhibition couldn’t change.

John McAslan and Partners was appointed in 2016 to lead the ‘re-invention’ of the museum as part of a five year, £68 million undertaking to refurbish and improve the Burrell. It was also controversially tasked with altering the circulation, including the removal of two of the three original rooms which were reproduced from Hutton Castle at Burrell’s request, and creating a new entrance in conflict with the architects’ original vision.

Along with consultants Arup and Atelier Ten, the architect has achieved a significant improvement of the building’s fabric: a comprehensive programme of flat roof insulation and waterproofing, M&E upgrades and new glazing have resulted in a 50% reduction in heating requirements and a BREEAM ‘excellent’ rating. Modern standards have been met without resorting to ugly parapet details and the original glazing bars have been reused, maintaining the elegance of the original.

The question is: would fixing the building’s faults in a faithful restoration – as Chipperfield has done, for example, at Mies’ Neue Nationalgalerie – have been enough? Not according to McAslan and his client; they have made significant changes.

The first of these was to remove the original poorly-used lecture space to make way for a new central ‘hub’ with tiered step seating over three floors. While the original theatre may not be missed, this new gathering space seems to lack function. Artificially lit and without addressing the landscape this new area feels corporate, with glass handrails and dark grey finishes, incongruous against the original building’s restrained palette of timber, concrete and red sandstone.

The most contentious move is the addition of a new entrance in the south east internal corner of the plan. Numerous commentators and one of the original architects John Meunier objected to the disruption of the carefully thought out entrance sequence: from the historic archway embedded in the southern gable to the courtyard, galleries and woods beyond. This decision was a result of consultation which read that the original entrance was unwelcoming and unclear, a view many have disputed.

The actual experience is less fatalistic – the original entrance is still widely used (my straw poll found 60% of visitors using it) and this entry has been tidied up and decluttered with shop and main desk moved. Would this have been enough? The purpose of the second entrance is unclear, although it does help to connect the ground floor back out to the landscape and a new ‘piazza’. This is perhaps a bit urban in this parkland location and only time will tell how successful it is.

The ambition to improve the display of the collection is clear and well executed with a reported 35% more gallery space and much more of the exhibition now accessible. There are more light controlled galleries, which is welcome, and work undertaken by the experienced exhibition team on the frameless display cases has significantly improved the visual clarity of artefacts and the view through the gallery itself.

What are buildings? Are they living, breathing things or fixed immutable works of ‘art’? The comparison made at The Burrell is that the building is like a musical score and adding in a few extra bars or cutting out the first movement is a form of cultural vandalism. But buildings need to be able to adapt as their requirements change and the people who use, pay for, and work in them change.

The worry is that the drive for visitor numbers will continue to conflict with the kind of quiet, subtle building that the Burrell is. While the remodelling lacks the nuance of the original, successes are found in the additional gallery spaces, better access to the collection and in the energy improvements. It is reassuring to see the aerial photographs with the new roof – a sea of 400 solar panels and the building still nestled among the trees.

The architecture of the Burrell is brilliant. It has proved robust and the elements that make it special remain: its relaxed welcomeness, the balance of inside and out, the sequencing of spaces, the carefully considered geometry of the ‘walk in the woods’ gallery. It is still one of the best galleries in the UK and much of its quality is a sensory experience that should be felt in person.