Use of an experimental render means rainwater has been migrating into the house since it was built. Until a long-term solution can be found, Carmody Groarke's protective structure allows the building to dry out 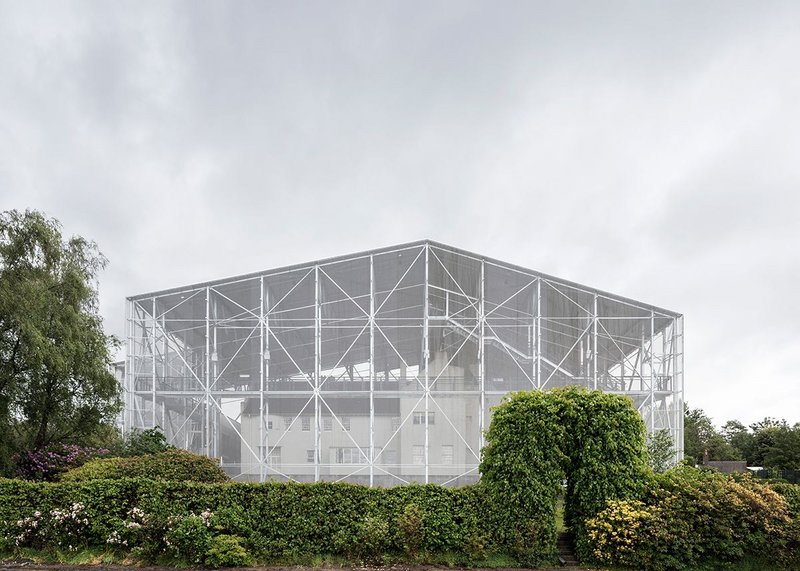 The Hill House is Charles Rennie Mackintosh’s ‘gesamtkunstwerk’, an all-encompassing design from the inside out and a distillation of his interest in Scots baronial vernacular, European arts and crafts, and Japanese minimalism.

The house is an amalgam of sandstone and brick, ‘buttered’ in a Portland cement render. Mackintosh was experimenting with the then new material to create soft, flowing edges that continue over wall heads and chimney tops forming the copes. But cement render is far from waterproof, it cracks and lets in water then is unable to breathe, which has resulted in moisture saturating the permeable sandstone substrate. Accelerated by the exposed site, wind-driven rainwater has been navigating through striations in the stone into the building’s internal fabric.

This problem, which became apparent soon after the house was built in 1904, threatens the building’s unique interiors and is eroding its masonry structure. An urgent solution was required: the house had ‘only two or three serious winters’ left in it.

Conservation experts and statutory bodies have long argued about how to address the threat to the Category A listed house and its precious interiors. A 2017 executive paper for the National Trust for Scotland (NTS), which runs The Hill House, favoured ‘containment’ to shelter it from the elements while a long-term remedy was found. The trust launched an invited competition, looking – one assumes – for a suitably dramatic idea: the shortlist included, among others, Zaha Hadid Architects. The winning scheme, by London-based Carmody Groarke, was for a lightweight steel roof on a galvanised steel frame with a semi-permeable stainless steel chainmail outer skin. The chainmail reduces rain penetration while allowing airflow for the building to breathe and dry naturally. Enough light gets in for trees to grow and bees to pollinate the garden within the structure.

The £4.5M scheme’s cross-braced galvanised steel trusses sit delicately over the house, tapering to pad foundations. No welding or hot works were allowed on site in the wake of the fire at Mackintosh’s Glasgow School of Art, so the 165 tonne steel skeleton was prefabricated for fast and simple erection; the main site works took just six months. The lightweight structure was installed using mobile cranes and has the added benefit of being entirely demountable and reusable.

The finished result is remarkably similar to the original visualisations, other than the white painted steelwork which has been left galvanised. No doubt this was for sensible cost and timescale reasons but the result is more utilitarian than it could have been; white may have enhanced the abstraction that makes the box otherwise so compelling.

A hermetically sealed ‘glass box’ solution was quickly discounted in favour of the chainmail mesh which gives a permeability and transparency that could not otherwise have been achieved. The result is a ghosted structure that shrouds the house within. The finely woven chainmail, commonly used for butchers’ gloves, is semi-permeable to air and moisture, allowing just 13% of the rain to reach the house to ensure controlled and gradual drying of its fabric.

The mesh arrived in 1.5m wide rolls from the German supplier Alphamesh and was hand stitched in situ by local steelwork contractor Miller Fabrications.

The 2,700m² of chainmail is fixed at the top on hidden brackets then draped, curtain like, down the facade before being tensioned from a steel flange just above ground level. The mesh is bolted back to the galvanised steel frame at regular vertical intervals to  resist any billowing effect. The architect worked with engineer Price & Myers, which designed not only for the chainmail self-weight of 8.3 tonnes, but also for the perfect storm of an entirely ‘iced’ screen turning the mesh into a sail with wind loads of up to 70mph. The maximum modelled deflection is 30cm and hence the fabric feels surprisingly and satisfyingly stiff to the touch.

While the mail is translucent rather than transparent, and The Hill House appears as though in a fog, up close it is beautiful and tactile but fades away when looking out to the long view.

Much is made of the new ability to walk around and over the building and see it from ‘dramatic and unusual’ perspectives ‘that Mackintosh could only dream of’. The hung walkways defiantly snake around the box and the detailing is confidently handled by the ­architect. The rooftop view of the house itself is interesting, although whether Mackintosh would have wanted us to see this is debatable. The walkways are part of the ‘sell’: National Trust Scotland sees the box as part of an enhanced tourist experience to attract visitors to an otherwise ailing monument.

Discussions overheard in the gift shop make it clear that the walkways are difficult for those with a fear of heights, the architect having chosen to use steel grilles instead of solid walkways to keep as much transparency as possible.

It is anticipated it will take three years for the house to dry out before conservation work can begin in earnest. The NTS still needs to develop a long-lasting solution, which means The Hill House box may have to stay in place for between seven and 10 years. Carmody Groarke compares its effect with making the building the exhibit; a jewellery box or ‘ship in a bottle’. The experience certainly feels like being inside an architectural model. The result is unambiguously better than the alternative of a scaffold covered in flapping ­plastic. The NT’s own experience during restoration works at Edwin Lutyens’ Castle ­Drogo in Devon meant it quickly ruled this out.

Less successful is the new three-storey, dark stained timber service building, not surprisingly difficult to spot in press photos. This houses the ticket and gift shop, lift and café. Despite its clever circulation path, the building is clumsily located, directly in front of The Hill House’s west, and most important, elevation. To the north there would have been ample space and less brilliant sections of Mackintosh’s architecture to obscure.

What of the conservation project? The worry is that this semi-permanent structure ends up in place indefinitely. If, as the NTS says, we are invited to a discourse on how we deal with our built heritage, we should be advocating for its removal as quickly as possible. Perhaps the sacrosanct status given to ‘original fabric’ needs to be challenged as the logical conclusion might otherwise be that the render and damaged stone should not be removed and the box would have to stay. Hopefully this is not the case and the building can be restored to deliver its original conception. But for now the box is bold and brilliant and it’s a contemporary abstraction that is wholly in keeping with Mackintosh’s synthesis.

Kieran Gaffney is an architect with Konishi Gaffney