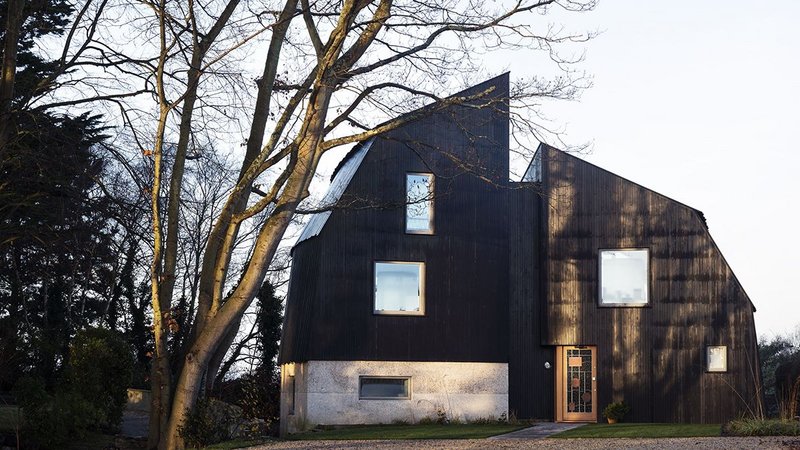 The modernist progenitor of the Houseboat, invisible inside are interiors of the SS Mauritania. Credit: Rory Gardiner

Finding the Houseboat is no easy task, but the journey is more than amply rewarded. Arriving at the site in Poole, Dorset, is the first moment of joy in a series of unfolding surprises. It sits in stark contrast with its suburban neighbours in Hamworthy, one of the town’s poorer suburbs, yet it feels appropriate. Reminiscent of Pegotty’s House Boat in the illustrations by Phiz for Dickens’ David Copperfield, the form is immediately recognisable, referencing an upturned boat hull perhaps accidentally cut loose from a mooring. While unusual, it suits its coastal position in an area with a strong boatbuilding heritage.

The site is owned and has been developed by Roger Zogolovitch, architect and creative director of Solidspace, a collaborative award-wining London based developer delivering crafted projects on brownfield sites. The Houseboat however, is a particularly personal project. It is bedfellow to Zogolovitch’s own 1930s home and inverts its name: the Boat House which, fittingly, is no ordinary suburban box. It encapsulates a salvaged second class lounge from the SS Mauritania in a modernist house purpose built in 1936 by a Mr Cullen, a businessman and keen sailor. 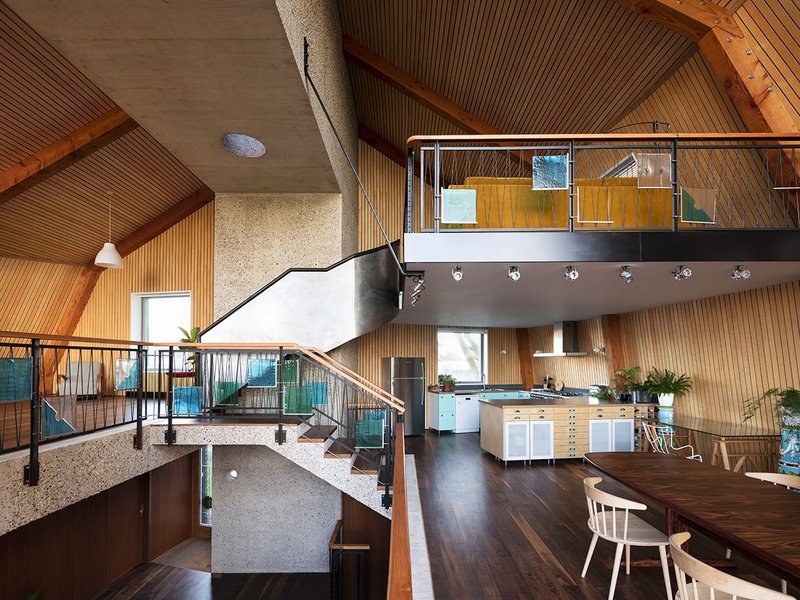 Cambridge-based Mole Architects was commissioned by Solidspace in 2010 and encouraged to investigate the developer’s trademark exploration of space and section. The brief advocated the use of texture and the allure of sea walls, suggesting that the house should evoke ‘the pleasure of beach combing: picking up sea glass, shells and driftwood’. From the outset, both client and architect were concerned with seeing how the building could be rooted in the place.

Meredith Bowles, Mole’s founder, says of his first visit to Zogolovitch’s home: ‘I loved the way the Boat House offered multiple surprises and the way it connected to the sea.’ The first surprise comes as you enter the whitewashed cube at first floor level which, containing the bedrooms, gives the feel of a cabin on a luxury superyacht. Light floods down through a rectangular gallery, pierced by a grand circular staircase. Descending to the living spaces, the building opens to the ocean. It was these qualities that Bowles sought to emulate in the new building. As a result, the Boat House and the Houseboat are engaged in constant inverse dialogue.

Standing outside the Houseboat your senses are arrested by the rough textured concrete walls which invite touch and ­provide an immediate sense of solidity. Intriguingly light in colour due to the high GGBS content, the local aggregate and finish impart a sense of a battered sea defence, or a shingle beach captured within a wall. The textured timber shell soars above, inviting you to enter the metaphoric hold of the ship and climb up into the trees.

On this relatively narrow site the plan maximises the built volume. Although its complex single curvature in plan and section is a nod to traditional boat building, the analogy is not overdone but skilfully interpreted. The two curved sections are held apart by the concrete circulation core, which wraps upwards in this rectangular void space. As at the Boat House, light spills from above, illuminating the textured surface of the concrete stair and walls which define the space.

Solidspace typology separates the functions of eat, live, work, yet creates a connection in the home through the manipulation of void space. In the Houseboat, similar devices are on display. In an inverted arrangement to the Boat House, cabin-like bedrooms are at ground level, functional and enveloped in textural surfaces. Building elements which are handled feel crafted with special touches throughout. Curved external bedroom walls are accentuated internally through a series of vertical plywood lathes fixed back to neoprene. This clever device, reminiscent of the caulking in boat decking, helps to absorb sound, complementing the calm interior while dealing with the difficulties of walls curving in two directions.

Anchoring the house is a concrete base that turns into the staircase, fireplace and structural core. It provides a counterpoint to an otherwise timber framed building where rigorous detailing is celebrated. Primary timber ribs tell the structural story of the hulls, splaying in a fan shape to provide the framework for the geometries. In keeping with shipbuilding tradition, these are formed from Douglas fir. The west facing glazed wall was constructed locally and frames the changing view of treetops, sky and sea beyond. Saint Gobain Four Seasons Glass reduces solar gain while the exposed thermal mass of the core further mediates diurnal temperature fluctuations.

The obvious display of craft and consideration of every detail is evidence that the making of this house has been an act of patronage, collaboration and dedication. A crucial protagonist was executive architect Rebecca Granger, who Bowles describes as a ‘champion’, ensuring that the ‘intent was achieved’.

Traditional procurement was avoided and great value achieved from a construction management approach. Granger was employed to source and manage individual trades, including the interior fit-out, which was completed by a trusted London firm. While this procurement approach is not for the faint hearted or time-constrained client, it can lead to a quality and crafted result.

The Houseboat is a home, rooted in local context and crafted with perfection and love. It has joy and soul and will only improve with the patina of age. It is a refuge with a prospect worthy of its recent success in the RIBA awards.