The National Memorial Arboretum, near Alrewas in Staffordshire, is a work in progress – a landscaped setting for memorials – mostly to those to those who died serving their country since 1948. It is run by the Royal British Legion although it is not exclusively military.  A corner of the National Forest, its site is former gravel pits and meadows by the Trent, and the aggregates industry continues visibly nearby. Although the 30,000 trees planted here have yet to mature and the landscape plan is still developing, it has become a very popular destination since its launch in 2001, numbers rapidly outgrowing its previous visitor centre. Now – officially opening this month (March) it has a new Remembrance Centre by Glenn Howells Architects.

What architecture is suitable for such a place? Although it is definitely not a cemetery, the sprinkling of some 330 memorials of hugely varying type, quality and scale across the landscape, along with the presence of a chapel, does call to mind the varied mausoleums and family vaults associated with some British Victorian examples, as well as – an acknowledged reference for Howells’ building – Asplund and Lewerentz’s Woodland Cemetery outside Stockholm. The neoclassical impetus for Howells’ building, however, was reinforced by the most prominent of the pre-existing memorials on site – the circular Portland Stone focal point of architect Liam O’Connor’s superscaled Armed Forces Memorial, elevated on its grassy mound, dating from 2007. 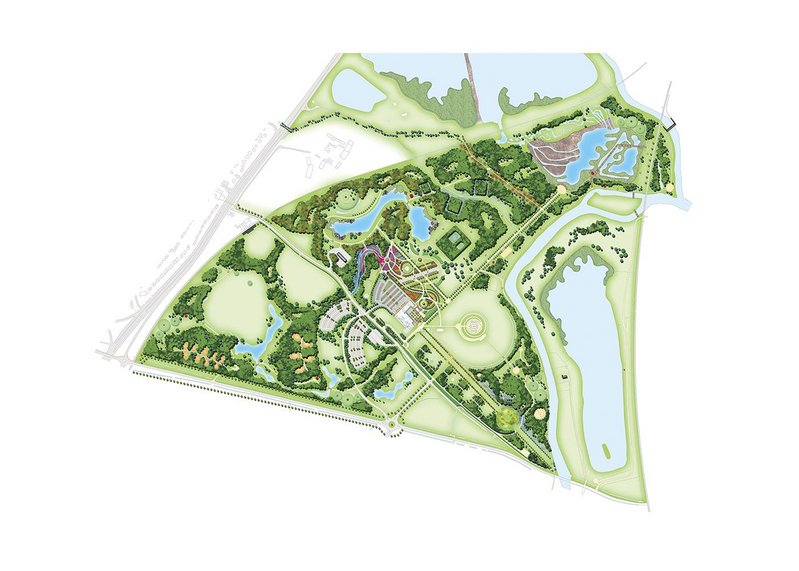 The Remembrance Centre was always going to be subservient to that but – says GHA project director Mike Cruise who I meet at the Arboretum – the plan was to set up a visual relationship between the two buildings. Hence the limestone drum at the centre of the colonnaded composition – which in its first form, before the project was trimmed along with its budget, was a larger Asplundish affair. As built, the frontage of the building, with its unifying colonnade connecting to the existing chapel by Architype, is still pretty imposing. The drum houses the audio-visual part of the exhibition displays in the building. But behind this facade the centre turns out to be an L-shaped building with a courtyard (‘Heroes Square’) opening up to the landscape beyond and connecting across to the chapel.

The Howells practice, known for organically-shaped buildings such as its Gloucester Motorway Services or the Savill Building at Windsor Great Park, also returns at intervals to the colonnade and grid plan, and the 4m grid is followed through rigorously here. This plan successfully absorbs two remnants of the preceding Architype complex – the chapel, effectively untouched but for the new colonnade, and the curved laminated-timber beams of the earlier visitor centre, which have been cleaned and re-used as part of the main interior and continue as a projecting wing at the rear.

Inside, all the usual ingredients of a visitor centre are present and correct: exhibition space, café/restaurant, toilets, shop.  One wing is occupied with the administration offices of the NMA – 60 full-time staff plus 250 volunteers – and another with education rooms for the many school parties visiting: around 15,000 pupils a year now, projected to grow to 25,000. The building brings clarity and scale to these previously overstretched functions. The centre has to be commercial to reach a target of being self-supporting, so the retail aspects are vital. Some 300,000 visits are made here annually, and that figure is projected to rise to 500,000 in the next 10 years. These are not evenly spread out, so the design capacity is 2,500 people a day to meet normal busy times. Occasional big events during the year bring in many more, such as the bikers’ annual charitable ‘Ride to the Wall’ every October – which last year brought more than 7,000 motorbikes and 20,000 people here in a fundraising act of remembrance.

The presence of the chapel across the ceremonial square reminds you that this place has multiple functions. At its most informal, the centre caters for family days out, like a public park, its theme of remembrance educational and carefully calibrated for all ages by the exhibition designer. Then come people with connections to those commemorated, including the directly bereaved. And finally it is a place of solemn commemorative occasions, particularly by the military. Cruise relates that his own father, a veteran of the Korean War, used to be a regular attender.

So the colonnade and drum speak of architectural high purpose. The arboretum management also wanted timber to be expressed in the building, so the colonnade and the building’s cladding are of larch, treated with a sacrificial stain to give a weathered finish, requiring re-application every few years. Structural engineer Techniker worked hard, says Cruise, to make the metal connections of the laminated columns invisible. Some columns also contain concealed rainwater downpipes behind flush access panels in the same material. A bronze finish to the anodised aluminium-framed glazing works well with the timber.

Inside, the layout is logical. Visually the presence of the curving roof beams of the previous building does feel slightly odd in this otherwise sternly rectilinear composition, and although this came about as the result of value engineering, one wonders how much money was actually saved in the end, and whether the old building structure could have been re-used elsewhere.

Interior design – a less sober affair than the exterior, again with a Scandinavian feel, though with added woodwool slabs to the ceiling soffits – is also by GHA, which remains involved in the project. The practice has designed a Phase 2 building, to take the place of ‘permanent’ marquees for large events, pitched behind the building. Inspired by pavilion-like buildings such as Mies’ Farnsworth House, raised above the flood level here, it will have a double-width column grid of 8m. This will help to resolve the present slightly unfinished feel of the back of the building – which is not a rear view at all, when you see it from the vantage point of the Armed Forces Memorial. The second building will provide an end-stop to the composition.

This is a well-judged piece of architecture. You can tell it wants to be an all-new building; perhaps it should have been but it has ingeniously incorporated fragments of the (not so) old. More importantly, it strikes the right tone: serious while not gloomy, a proper introduction to the landscape and meaning of the place.

6 years from competition to start on site