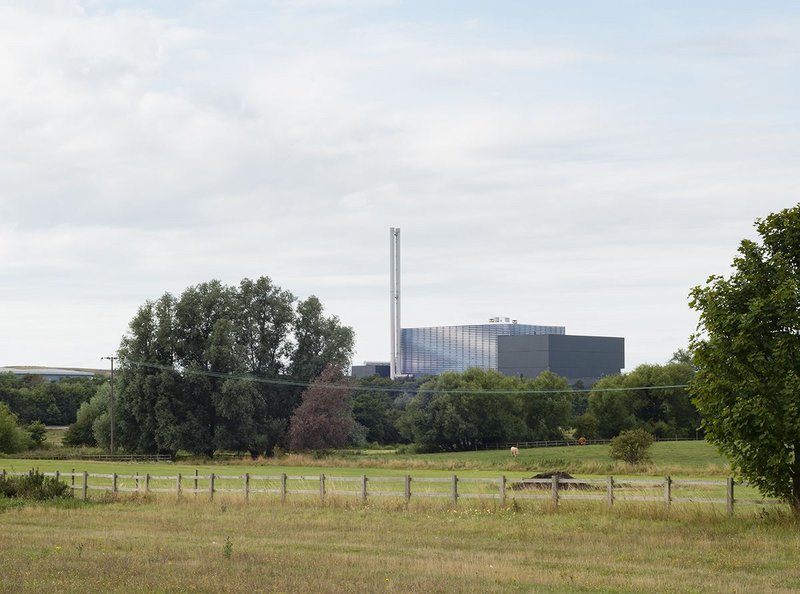 Given that the the Suez Waste to Energy Plant in Great Blakenham takes waste from the whole of Suffolk and produces enough electricity for 30,000 homes, the first distant view of its two slender stacks above the road side hedges is both surprising and encouraging. It is also an example of how spending a small amount on the design of infrastructure (compared to the cost of the plant) pays dividends not only for building efficiency improvements but also for long term public acceptance of these necessary buildings.

The plant, which began operation in 2014, was at the outset subjected to scrutiny by the planning department – hence the appointment of Grimshaw Architects. Partner Kirsten Lees is clear, however, that the firm’s greatest contribution was the delivery of a wider strategy related to the form, function and building processes. And this is true:its comprehensive design analysis and shaping of the building form in the landscape followed by a complimentary Cabe design review meant planning was never an issue.

Architects have more to offer such logical systems infrastructure than is immediately apparent: it is not just a case of prettying up facades for planning. At the Olympic Park, where I oversaw the commissioning and delivery of designs for the infrastructure, the architects really delved into the engineering processes to define the form and inform the architecture. This not only improves public perception of the buildings but retains value in the adjacent land or landscapes.

Grimshaw’s grasp of the context of the Gripping Valley and the semi rural landscape pepper potted with industrial buildings led to an analytic approach to the massing. The final site layout is the result of the analysis of a significant range of plant arrangement options, where Grimshaw carefully broke down the independent functions and volumes to optimize the appearance of the plant and its functions. What remains is a pragmatic clear layout which functions efficiently for users but considerably reduces the visible bulk of the plant.

Grimshaw initially separated the large footprint of the ash and waste store, nestling it low on the site behind a band of perimeter trees, the railway and road. This in turn has freed the arrangement of the remaining site for the other volumes to be more clearly expressed and set in an east west sequence ringed by a one-way service road.

On the building approach from the local roads, tree screening mitigates the scale disconnect between the perimeter and the huge building, almost entirely disguising it so that key views are either from the middle distance or within the site.

The main site entrance is set back from Bamford Road creating a green foreground for queuing HGVs. The length of approach acts as visual mediator between the scale from outside and the parking and office space and HGV weighbridge within.

To the right a retention pond filled with water harvested from the plant building roofs forms part of the landscape setting that signals the visitor centre and staff entrance.

Suspended over the retention pond, the offices and visitor centre have dramatic views of the surrounding countryside. Elevating these staffed areas might initially seem excessive,  but it allows for direct connections to the plant control areas, avoids pedestrian/vehicular crossover on the service road carrying HGV traffic around the main plant building, and solves a lot of functional problems.  Furthermore the centre manager found the office space, a significant improvement on the customary black box, a welcome contrast to other facility working environments. It is hard to believe this does not help with staff morale and retention.

The inclusion of a visitor centre in the overall building composition also ensures engagement with local residents and provides an educational and community resource. The centre offers tours of the facility and comprehensive information about waste and recycling, and the tours are fully booked.

HGVs go to the weighbridges and then the tipping hall, where they unload waste into a deep bunker with cranes above. These operate not unlike the crane machines in amusement arcades – but at a dramatically different scale.  Then the waste is mixed to ensure it has a regular calorific value before being lifted into the furnace where it is burnt at high temperature to produce heat energy.

Waste is burnt in the boiler hall/furnace – the plant’s largest volume. Flue gas is treated here and toxins extracted, and it houses the turbines.

Finally, the waste is transferred across to the Bottom Ash Recovery facility where a magnet picks out metal. The remaining ash products are then graded for re-use in either roads or buildings. All in all this is an efficient process producing energy and waste that can be recycled elsewhere. Only a very small percentage is toxic and has not found a new use, but that is coming soon.

The team is very explicit about the articulation of the different parts to break down the massing and express more directly the process and functions within the plant. Its ‘shrink wrapping’ of the internal functions has reduced the size of the enclosure volumes. The distinct expression of each volume and different well detailed materials with clean lines make for an economic and smart building.

The boiler hall, which is the primary function and the biggest volume, has been picked out for special treatment. External cladding of translucent polycarbonate with twisting horizontal louvres mounted externally gives the building an ephemeral visual texture. The louvres’ changing angles reflect the light differently and seen from afar they create a shimmering unsteady movement that reduces the volume’s visibility in the landscape. Running the length of the roof, transparent ETFE strips admit light behind the facades, creating a fantastic top lit working environment and making them luminescent.

Other volumes such as the tipping hall are clad in a darker panel intended to ground the buildings. However, because they are set against the very successful ephemeral treatment of the main boiler hall they now make the other elements of the building more ­visible and heavy especially from a distance.

I left impressed by what the architectural team had achieved and the care and attention it had paid to the functioning of the building as well as its quality.  As the car rattled off along the bumpy lane through the withering autumn landscape, towards the soulless ring road that encloses Ipswich, the slight slim stacks of the waste to energy plant spoke more elegantly. The design effort to expose those stacks and remove the standard bulky flue casing was clear.

All in all this building finds the right line: its design approach has made it economic and functional and as unobtrusive as it could be. It is also a great place to work in and steps a long way from the portal frames and haphazard structures of so many utilities buildings.

As political decision makers continue to be evaded by broader challenge of building vital infrastructure to service a growing population and to deal with climate change, schemes like these offer hope. It not only offers an alternative to landfill but it also sensitively addresses the visual impact of infrastructure buildings – which so often causes opposition.

Suffolk County Council is to be commended for its initial hard line and so is client Suez Sita, which looked beyond the process and understood how profound is the subconscious effect of these buildings on the landscape and the public whose support they need. To build more they have to take this on; it will pay back long term dividends.