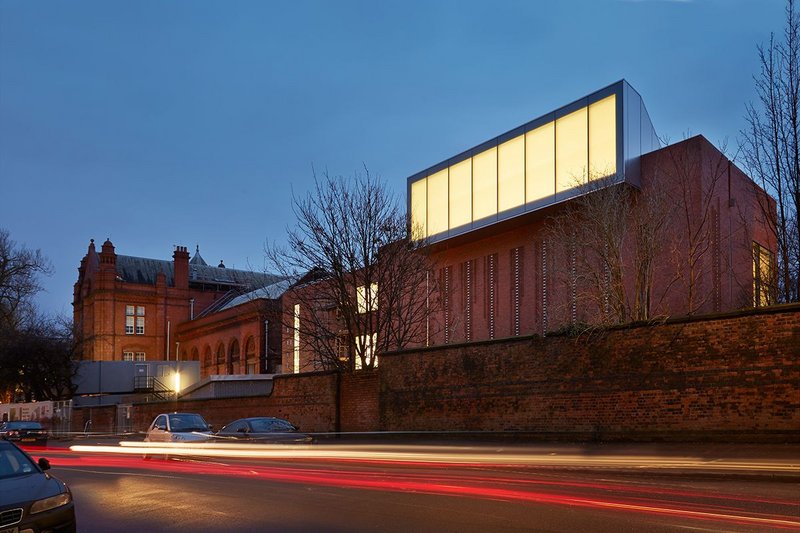 MUMA for The University of Manchester Estates/The Whitworth
GIA: 1,856m²
Conservation Award
Building of the Year

A project for all seasons. The Whitworth combines art, nature and architecture in a way reminiscent of 1950s Aalto. This extension to the Whitworth Gallery on the edge of Whitworth Park builds on John Bickerdike’s 1960s work which seems subtle in the extreme on entering, but gradually builds outward in a sympathetic but entirely original way.

MUMA, in concert with gallery director, Maria Balshaw, has proceeded with great care. The re-landscaped forecourt provides a setting for sculpture with almost imperceptible access ramping; through to the foyer leading to a Bickerdike-fitted cross-circulation gallery where new openings reveal the stair to the great hall above – this has had its 1960s ceiling removed to expose wonderful timber trusses. Then onward to the main gallery where yet another suspended ceiling has been removed to expose the original barrel vault into which ventilation ductwork has been skilfully inserted.

This is not just a conversion or adaptation…  the new architecture emerges seamlessly as an integral yet individualistic part of the whole assembly – a café-bar to the left is all glass, views to the trees outside are almost internalised, and a cloister below is shaded with almost impossibly slender fins. Finally, the ground floor special gallery has a roof light which does its job internally without fuss but is highlighted above the north elevation and backlit at night to announce the gallery’s presence with some force. One can almost say (but probably shouldn’t) that here the new architecture almost outshines the current exhibitions.

See other winners in the RIBA Regional Awards 2015 – North West