Pivotal to South Shields’ revival is FaulknerBrowns’ new library The Word, which through ambition and rigorous geometry speaks strongly of civic pride 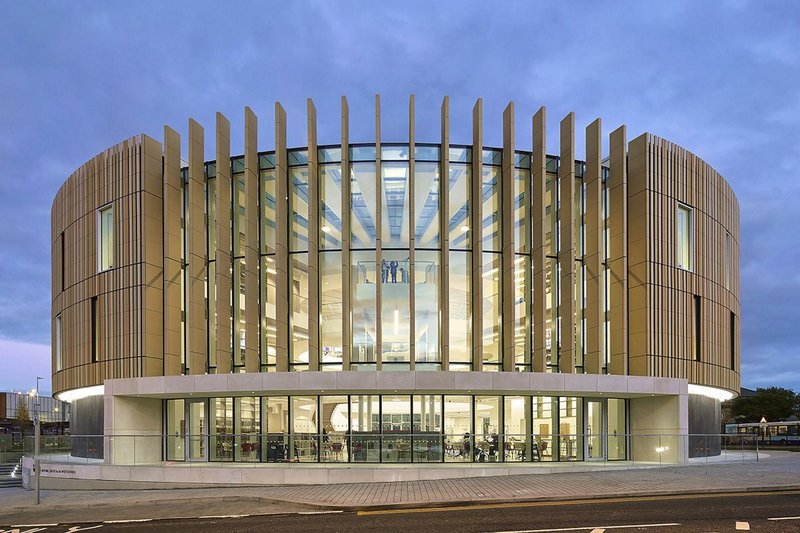 It is a central public library. But it is also the ‘national centre for the written word’. Who so designated it? It seems nobody did except the client of this building, which is South Tyneside Council. But this mischievous naming reveals both ambition and a fully justified civic pride in a building that works beautifully as a social and cultural hub for South Shields and looks the part. It is known as ‘The Word’ for short. One winces, but never mind: there are even books to be found if you look hard enough.

The ship-builders may have gone from these parts, but not all the ships: the Port of Tyne is still busy. Nissan exports its Sunderland-built cars through here. The river mouth is a centre for prawn fishing. The nearby ferry still shuttles across the river between the two Shields, and from the north bank bigger ferries cross to Amsterdam. Set on a broad promontory between river and sea, with some fine civic buildings, linked to Newcastle and Gateshead by the metro, with a bit of a push South Shields could have a relationship to the big city somewhat akin to Leith/Edinburgh. But it has a way to go: it is still recovering, there are plenty of cleared post industrial sites. The push is now happening, with a £100 million regeneration project – South Shields 365 – under way in the centre. This library is the first, £13.5 million, instalment of that, so it carries a weight of expectation.

It is circular, a canonic form for a library. With public libraries being closed at a frightening rate across the country as the government slashes local authority funding, it is commendable that South Tyneside should go in the other direction. But such libraries have a rather different function nowadays. Therefore The Word can be seen as an ­architectural report from the front line, a pointer to the ­future of this building type. The circular plan makes it a pie-chart of new uses.

While nearly everything in this building radiates from the centre, books are not very apparent there, nor are they architecturally fetishised as at Mecanoo’s Library of Birmingham. Instead, the traditional library stock is pushed into the quiet areas around the perimeter. The first layer of accommodation on all three levels around the full-height circular atrium is what FaulknerBrowns’ partner Steve McIntyre ­describes as ‘the zone of instant gratification’. It was a first for me to find a row of 3D printers in such a place, but there they are, in a place called ‘FabLab’ (of course) which is all to do with encouraging young 3D product designers. There’s also a wall of big screens which does much the same thing for graphic design. This makes sense in a town wanting to generate skills and employment in the creative industries. The ‘Gaming Zone’ equipped with classic Nintendo and Sega games is a bit more indirect, though the touchscreen information points – for instance one showing you all the live shipping movements in the area – more obviously inform. But most of what you find in this library is associated, even if loosely, with storytelling in all its forms. When I arrived, a group of women were busy at trestle tables at the base of the atrium, making what look like rag rugs based on characters in The Gruffalo.

The Word can be seen as an architectural report from the front line, a pointer to the future of this building type

There is an exhibition gallery on the ground floor, at present running a show all about the films of Ridley Scott, a local boy. Inevitably there is a café and a shop. Higher up you find the internal observation deck, ‘The Lens’ (sigh), looking out across the Tyne. It comes equipped with telescopes, as does another, open observation deck up on the roof. An attic storey was originally conceived as a restaurant but it turned out that the demand locally was for conference space: FaulknerBrowns is now fitting it out for that purpose. 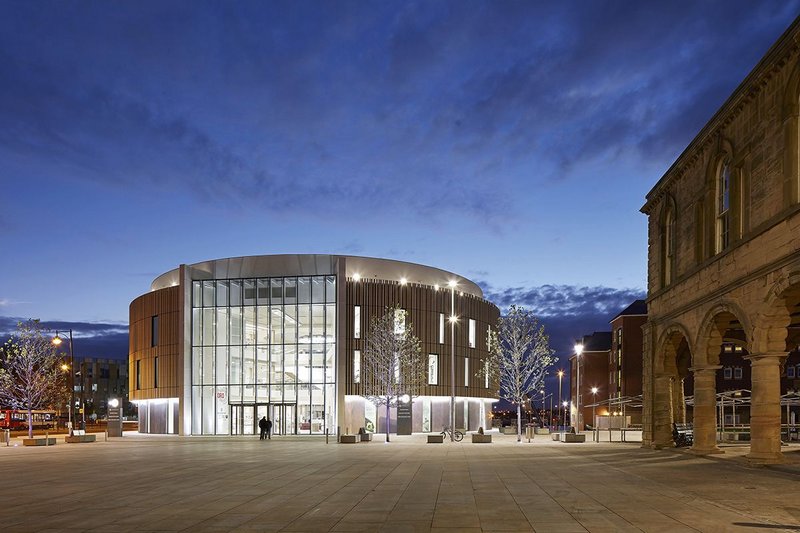 The flat full-height glazed portico plays the classical role of engaging the building with the market square. Credit: Hufton+Crow

There’s more: various meeting rooms, one of which doubles as a performance space, as does the foot of the atrium. An immersive story­telling room on the top floor (‘Storyworld’, inevitably) where entranced children emerged from a reading (The Gruffalo again) that was also an audio-visual experience thanks to projection and sound systems. You have to pay for that, and there were plenty of takers. In today’s library world, not everything is free. But the facilities are impressive – a complete TV and sound recording studio, for instance, is some asset in such a place.

But what of the architecture? I was impressed by its consistency. To properly achieve a circular building, as project architect Nick Heyward relates, you have to be completely rigorous in your radial geometry. Everything must line up, and here it does, right down to the single seam from the tubular moulds for the in-situ columns – each precisely placed at the correct radial point. The moulded concrete is pretty good throughout, especially in the building’s Guggenheim moment, the slightly convex roof slab to the atrium, also radially moulded with a shallow pattern achieved with laser-cut shuttering. A circular cluster of light and sound fittings in the centre of this is visually rather good.

It helps that FaulknerBrowns is the interior designer here as well as architect. Little things like recessed rather than projecting sprinkler heads, for instance, count for a lot –  as does the way acoustic absorption materials are integrated properly into the interior design, leaving the concrete exposed to do its temperature-regulating stuff (cooling water pipes run through it). It also helps that this is the third large civic building in a row done by this group within the practice, the others being the Number One Riverside civic centre in Rochdale and Hebburn Central, another South Tyneside project. The team has developed a spatial and material language it clearly has confidence in, something you see in the staircase climbing the inside edge of the atrium – in steel lined with oak internally and white washable gypsum fibreboard externally. It achieves its aim of appearing to peel away from the edges of the floorplates.

Externally the visual metaphor – of pages of a book turning, expressed through vertical terracotta planks and fins above a rough-ridged black-concrete base – is kept subtle rather than strident, thank goodness. In-your-face symbolism can be wearisome, like all those wing-shaped airport terminals. Here they dial down the references (white is meant to reference local salt-making, black coal-mining, etc) so you wouldn’t necessarily twig. The three harmonising colours of the terracotta are taken from the stone and paint tones of the small but commanding grade I listed old town hall in the market square ­behind. Said square has received high-quality hard landscaping in stone, while the removal of the previous building on the library site – a 1960s office block – allowed the architect to re-establish the blocked course of King Street, which leads from the Tyne ferry right through the market place and on to the North Sea coast. It is pedestrianised at this point, as is the whole market place, previously used as a car park.

Just as the observation deck with its ­increased glazing on the riverside elevation establishes a focal point on one side of the drum, so the full-height entrance portico does on the market square side. Here a concession is made that answers the question – how can a circular building command a corner of a rectilinear civic space? The answer is to break the circle at this point with a flat-fronted section. It might be all-glass but it is performing the same job as the portico of a Pantheon, mediating between geometries.

This is not to over-praise the building, just to point out that it accomplishes its civic position through time-honoured means. It all looks very simple and effortless but this clearly required great concentration throughout. Plenty of conceptually simple designs go wrong through lax execution. Not here – tight design and quality control are very apparent, down to the fact that ‘back of house’ service doors – always a problem in a building with no back – visually recede in the black base. The architect pays tribute to a committed public sector client, a design selection process run separately from the developer selection and contractors who bought into the approach. The end result – very popular with the public – deserves applause. Civic pride expressed through architecture is alive and well on Tyne­side – that is what’s nationally important.