… on the way to our Forum. The RIBA calls in Theis and Khan to reveal its cool side

It sounded laughable. Bring kookie Hoxton to the straightlaced RIBA? This is what Angela Brady kicked off her RIBA presidency with. But with Brutalist Playground transforming the gallery in George Grey Wornum’s magnificent 1934 West End headquarters with an exhibition of foam and frolics, and a little sister building next-door-but-one shaking up the silos of the institute, it seems like that sort of playful could be within reach. Chief executive Harry Rich has long contended that the RIBA is creative, like the profession it serves.

The little sister is 76 Portland Place, refitted by Theis and Khan and partly modelled, says Soraya Khan, on the members’ club, Shoreditch House. Not so long ago it was the depressingly dreary Institute of Physics. Then RIBA staff were housed either in the dark warrens of 66 Portland Place or another local office which was about to be demolished. The pressure to move and the availability of the Physics building resulted in a fast track RIBA competition – slowed only by some rejigging of competition turnover criteria to avoid excluding smaller practices. Theis and Khan had previously given the Calouste Gulbenkian Foundation a thoughtful modern home in Hoxton Square, and designed its own Stirling-shortlisted home and practice office development Bateman’s Row.

Patrick Theis and Soraya Khan had already done some thinking when they came to the interview. RIBA President Stephen Hodder was won over by the sketch with which they finished their presentation: a new glazed slot with a view of the plain back of Wornum’s 66. Their diagram emerged quickly, a dark ground floor lecture theatre would be opened up into a light filled social space – the forum – the narrow seven storey building above it would be staff offices and a mews building at the back was to be attached to the main structure by a glazed roof. This would become home to the RIBA’s London region office and to members as an incubator unit for emerging practices for which seven trial places have been now been let. But these are not the only people who have been brought into the building: so has RIBA Enterprises, the London end of the commercial arm of the RIBA which includes the RIBA Journal. Folding the ditched rental costs into the equation, and the cost of the loan for the £3.6m refurbishment plus £13.5m building purchase, the vastly improved offices are already close to breaking even and with rising rents in this area and the letting out of 80 Portland Place, the space will soon start saving the institute money, explains the RIBA’s head of projects Martin Pascoe.

The forum is the shop window, but in a strange way. From Portland Place you can now see right through the building, past the busts of Sir Christopher Wren and Inigo Jones jauntily set into a bright orange wall, across the rubber floor and past the curving plywood semi-enclosure with its shelves. But what is this shop selling? There is no signage mentioning the RIBA, nor architecture, and even when there is it will be modest to avoid confusion with 66. However, there is at least an architectural model in the foyer window and in the long term a plan for it to be joined by a significant piece of art work on the theme of architecture. This sort of openness is unique along this grand thoroughfare of institutions, private schools and embassies – many designed by Robert Adam and bracketed by John Nash at either end. The BBC, at one end of the road, has made a stab at opening up views but number 76 gives a real sense of perspective and the brick walls of the mews at the back hint at the secret life of the city, its service yards and luxurious little homes. In this tangential way it does perhaps advertise the best of architecture.

The forum deserves a paragraph to itself as an exercise in a social space that is canteen, meeting space and social condenser; and robust enough to operate as all three throughout the day. The coffee machines, with specially designed islands around them, are neat, their superjets of steam and ipad operation making them seem high tech. But like everything else here they are designed around sociability. A once glass-roofed corridor has been turned into light filled booths that vary in size as much as the uneven structure that they are defined by. An arcing piece of plywood joinery, lined with banquettes and rising into shelves, means there is no uncomfortable expanse of space and refectory tables sit alongside smaller spaces to huddle. It can get acoustically overheated but next on the fine tuning list is a condiment area.

Luckily, given the budget and programme, the stairs were worth keeping in their terrazzo with timber and steel balustrade. A coat of grey sorted out the steel. Open doors onto the office, and rooflights in the stairwell mean that on hot days this is the coolest place in the building (excepting the controlled environment of the basement archive). However, costly plans for new windows were ditched, along with potential improvements to thermal performance. In the offices the suspended ceilings were torn out and the rough ribs of pot and beam given a coat of white paint; servicing is contained above two lines of suspended ceilings that run between the lifts and the stairs in the centre of each floor, breaking the offices into a team-friendly H-plan. But this was not only down to the financial budget, the limits on service spaces in particular were tight. Swapping one lift for two has meant a regular morning squeeze for those on the top floors and, in the half-landing loos, the shortage of space plus energetic driers means sharing a passing chat is out.

The bigger losses to Theis and Khan’s early ideas were a stair in the forum linking the mews offices to a roof terrace. The terrace now has planning permission and will be implemented in a low key way over the summer. From where the Riba Journal sits on the fifth floor, for the last four months and counting, this is the best of the six offices the magazine has operated out of for the last 15 years. Central London and connected – yes. But day to day the pleasure of the high ceilings, the air movement that can be induced by opening the original large aluminium (bronze if you are the street-facing) framed windows and the sociability, lightness and clarity of the Forum make this a remarkably pleasant place to work. ‘The spirit of place came from Theis and Khan,’ says Hodder. Does it have the buzz of Shoreditch’s Google Campus or the luscious beards of Hoxton’s creatives? No. Nor does it share much with the panelled, decorated Royal Institute of British Architects at 66. It has great spirit of its own. 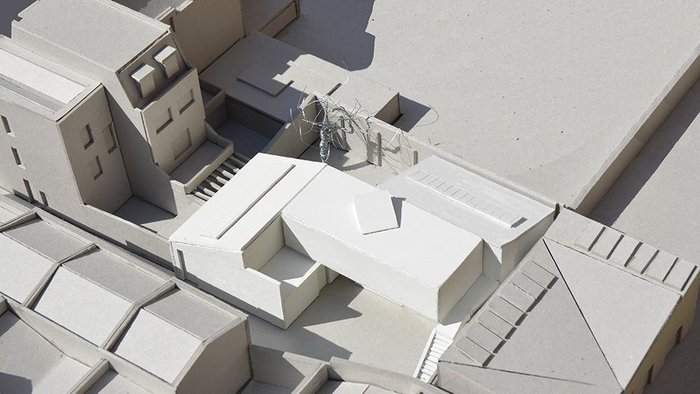 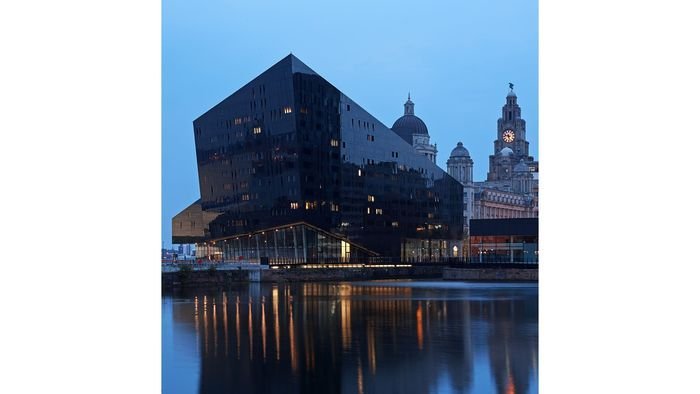 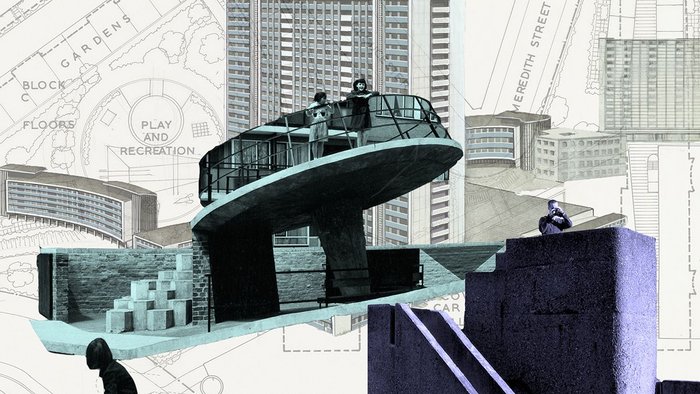