Bold ambitions led an Essex primary school to move to the village’s new estate, and gain an exciting modern building by Sarah Wigglesworth Architects. With inventive design and successful collaborations the move paid off, and it didn’t cost the earth 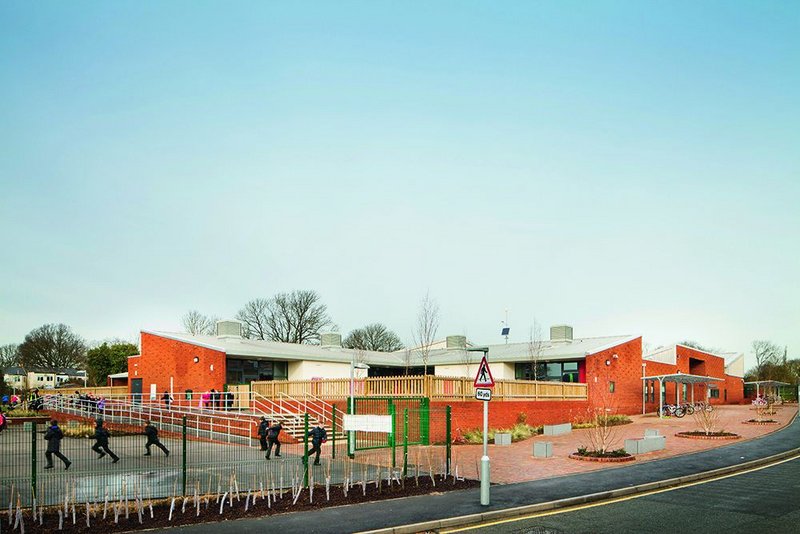 Up in the attic of Takeley Primary School a rug and bookshelves nestle under the eaves. This hidden story space shouldn’t be here – it is not in any schedules and no Building Bulletin requires such a facility.

It is that squeezed-in mezzanine, rising from the library below, that won the project for Sarah Wigglesworth Architects and its contractor-employer May Gurney. How it was snuck in when public spending is all about cutting costs is a tale of collaboration between the school and its informed governors, the architect and an unusually flexible contractor, better known in the field of highways and waste collection (early meetings were held at its gritting facilities in nearby Bishop’s Stortford).

The new village school at Takeley in Essex lies deep within the 840 new homes of the Priors Green estate. The old village school, its head and governors decided to move here. They could have stayed put and seen another school parachuted into the new area, but as a foundation school Takeley has a certain independence from county decision makers. 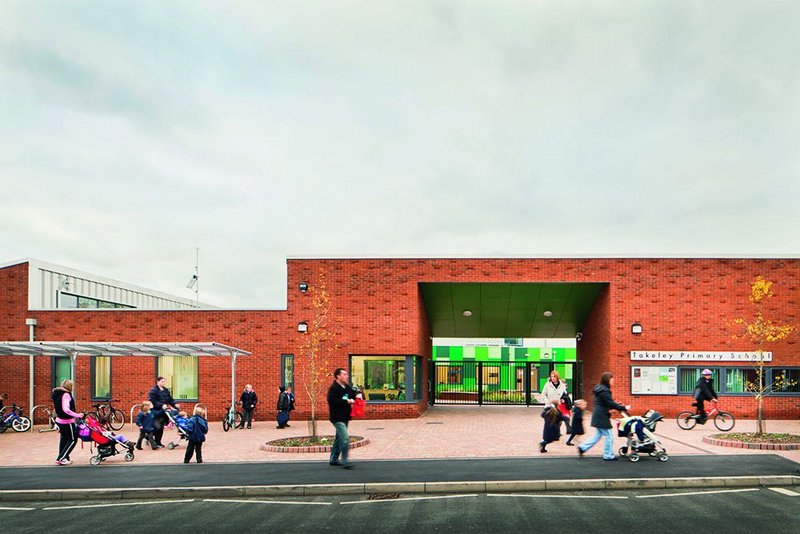 A handsome entrance cut into the brick of the building.

It was an independence the governors were keen to assert when it came to commissioning a new school. As Building Schools for the Future was pulling the education estate into the 21st century, elsewhere in Essex the county was making its own changes to commissioning buildings. The design and build route was new to the council but it had the SmartEAST local authority framework with its list of approved contractors to back it up. School governor Mark Gaby is a civil engineer with Arup. ‘I knew what the traditional D&B meant for the change process and cost of changes at a late stage,’ he says. He was concerned about the risk – held by the school – and that teachers, unused to seeing a design on paper, might realise issues around size and layouts too late. He hoped that a different route ‘might allow time to play around with things and understand the design’.

Gaby’s suggestions of an RIBA competition to find a design partner to fine tune a concept then going out to tender on a traditional route stalled; partly in the face of OJEU hurdles. ‘It seemed like a design would be foisted on us,’ says Gaby, ‘That it would not be a real conversation.’ A compromise was reached to run a mini competition among pre-selected contractors. The school recalibrated the selection criteria to 85% on design submission, engagement and interview and just 15% on cost. ‘We were interested in the calibre of the design partner,’ says Gaby. To stir up architects he alerted some of those involved on projects he admired and gave them the names of the shortlisted contractors. From there it was up to the practices themselves. 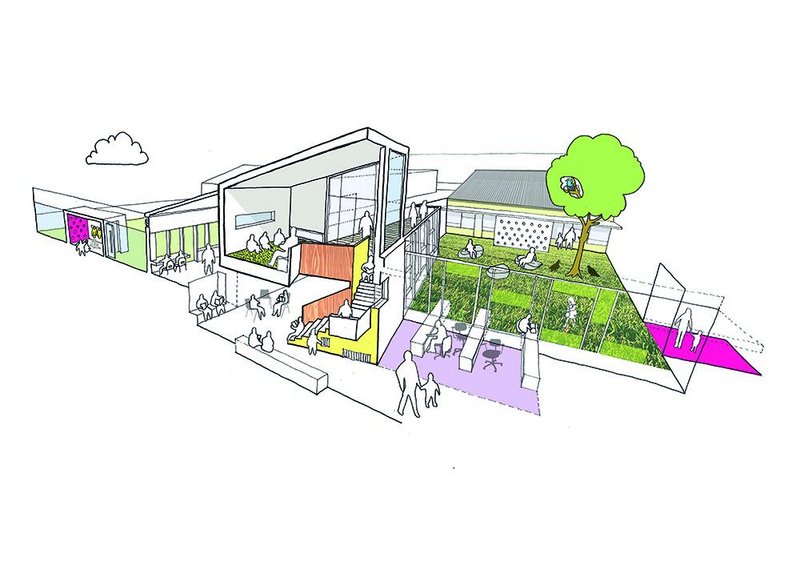 Early diagram of the school with the story space at its heart, under the eaves.

Sarah Wigglesworth Architects rang around and found receptive ears at May Gurney which was just expanding into building contracting. Wigglesworth suspects the practice was allowed a slightly longer leash on the contractor’s first foray into buildings. A special Takeley School board game, devised by project architect Toby Carr, was the practice’s calling card and its way of teasing out some of the things headteacher Mandy Line, Gaby and others at the school wanted. A short consultation morning with the potential client meant every moment counted. 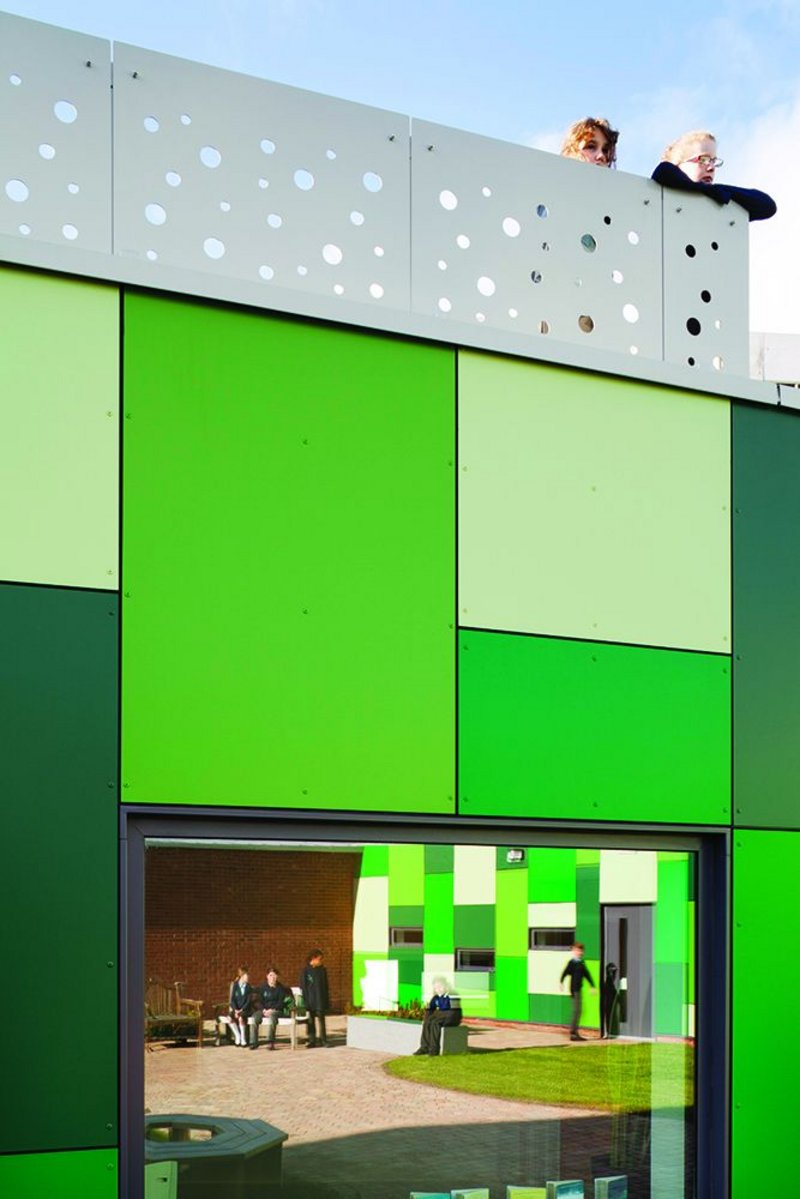 Overlooking the central courtyard with the green panels showing where the building block has been cut into.

‘When we were asked what we wanted from a perfect school the staff just wanted the school we had,’ says the head, Mandy Line. ‘We just had educational aspirations’

This produced a form with a sense of the importance of reading (thus the library and story room) and the need for smaller teaching spaces that appear throughout the school in alcoves and niches and circulation routes opening out into a little pools of space for more concentrated individual learning. Gaby compares the consultation process to earlier visioning workshops carried out for Essex County Council. ‘They were no use whatsoever,’ he says. ‘We just got the old school described to us.’ Line considers it more ruefully as an example of why architects are needed. ‘When we were asked what we wanted from a perfect school the staff just wanted the school we had,’ she says. ‘We just had educational aspirations.’ The briefing and schedules of areas prepared by Essex County Council  as client advisor get no mention: at the high level this building is about the concept and aspirations of the school and its architecture. 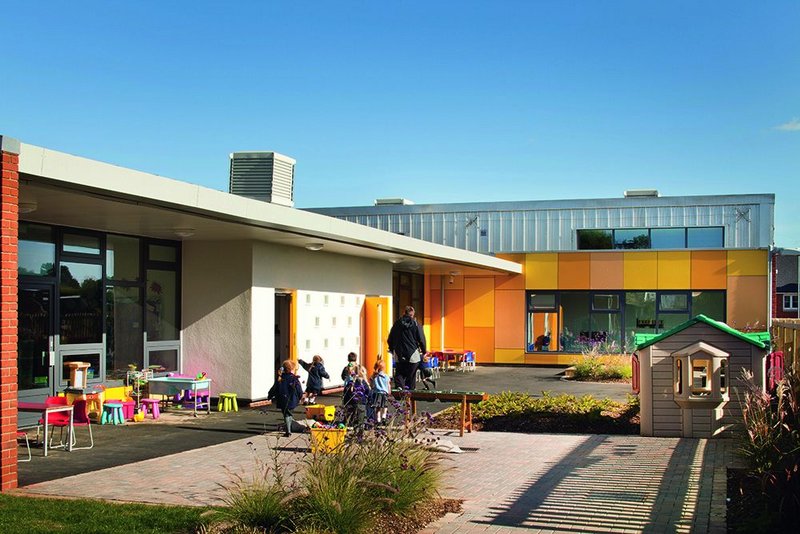 The reception courtyard, capturing the summer sun, with windcatcher above.

An inner courtyard organises the school around it, with circulation on its edge and the canopied entrance looking onto it (Carr describes the efficiency of the plan as ‘a block with holes in it’). The entrance is flanked by the school office-reception and separate music cum community room. Overlooking the courtyard a metal balustrade with holes bubbling up through it allows children to peer down from the story-telling deck. The courtyard seems a generous space for what is mainly a staff getaway but it also contains the footings for a future expansion with two classrooms. Sadly, the strongly stated entrance is more symbolic than functional for pupils and parents who use the side gate in the playground fence at the beginning and end of each day.

Inside, the courtyard is lined with green Trespa panels. This treatment of facades that have been ‘exposed’ by cutting into the block is carried through the three courtyards shared by the classrooms. The school is proud of them but they are broken up with hard landscaping of bricks plus blocks to sit on as well as the schools table and chairs. In pride of place is an oversized, galvanised water chute directing nozzles of rain water into a pool in one courtyard – though it doesn’t quite match the wild tigers, solar controlled deckchairs and superhero discos suggested by the children for the spaces.

Inside, the corners of the courtyards – like the budget – make a lot out of very little; those little reading spaces, the library, a teaching kitchen. Classrooms have an intense ground plane, packed with storage, recycled robots, drawings and kit, but lofty ceilings that lift the spirits. The classrooms look out at the green grounds. Windows, high and low, knock holes in internal walls and animate the ‘corridor’ with snapshots of classroom life.

There is just one double loaded corridor: where Stansted Airport’s second runway, should it ever happen, would bring the flight path alongside the school. Here the mass of the school halls defend classrooms from any future roar of planes. The idea is that the school can be  naturally ventilated, with windcatchers kicking in if windows aren’t opened. The windcatchers could also seal it against low flying aircraft. 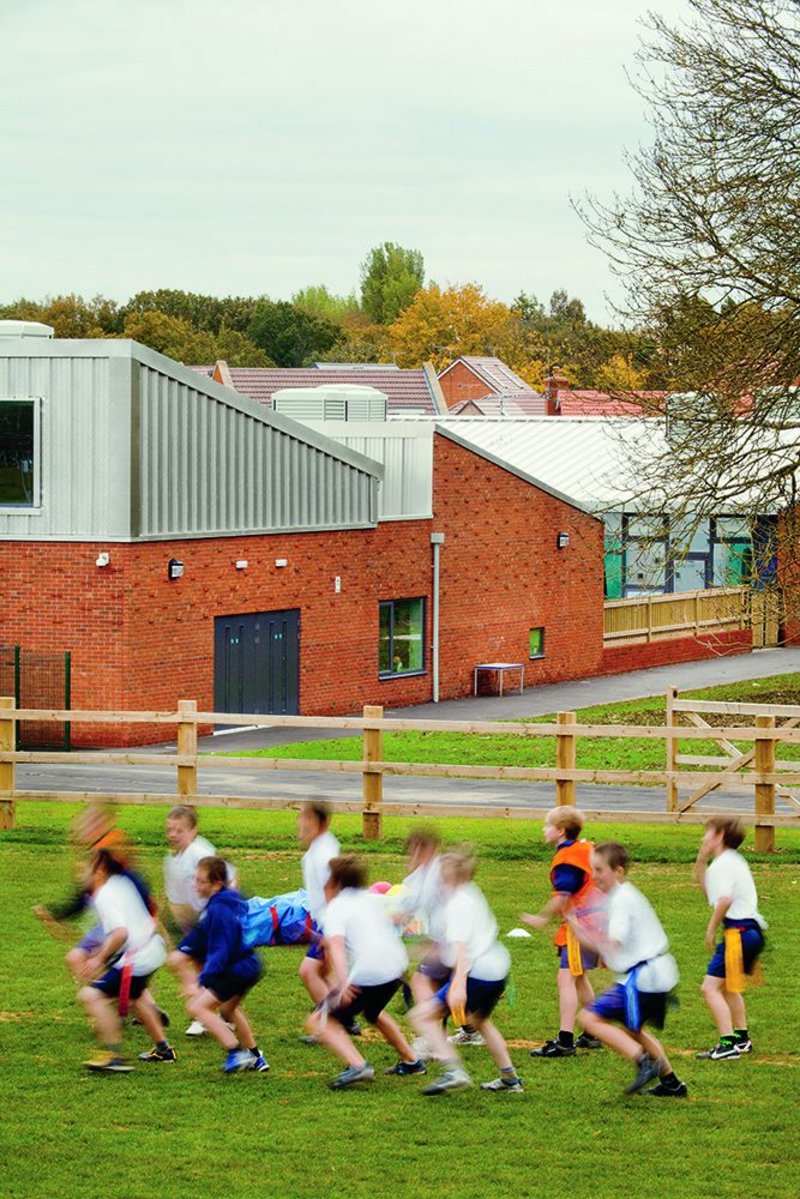 The halls offer slightly a defensive face to the playing fields, a little bit of future proofing against nearby Stansted Airport.

‘The practice imagined it as a new farmstead, a big building on the edge of an arable field – though those very fields have now been covered in the houses of Priors Green’

Roofs rise over the circulation bringing top light through clerestories while oversailing the south facing facade and creating sheltered enclaves in the courtyards. Encased in aluminium with standing seams, the roofs make a low level landmark for this estate of ‘traditional’ newbuild homes. The brick base hunkers it down into the gently sloping topography of the site – rather in the spirit of the school’s previous building despite the obvious differences. On the new school projecting headers and a soft tone to the red brick elevate it with a great deal of character. The practice imagined it as a new farmstead, a big building on the edge of an arable field – though those very fields have now been covered in the houses of Priors Green.

What surprises both Sarah Wigglesworth and Essex County itself is that the building got built pretty much as designed. This seems in large part a tribute to the collaboration with May Gurney, its contracts manager Richard Clarke and site manager Paul Watling, who Carr describes as running a ‘tight, organised site. They were good at flagging up issues and working out how to resolve them. That had a big effect on the project,’ he adds. And the fact that May Gurney was involved from the start so was  never forced into a position of taking on an unexpected design, seems critical – though perhaps it was not a recipe for business success as it has now pulled out of building contracting.

‘Things that had not bottomed out in the construction contract drawings did start to cause pain,’ says Gaby. Of course, there was a lot of cutting the coat according to the cloth. At Sarah Wigglesworth Architects’ previous school, in Sandal Magna, Wakefield, the cost came out at £2,985/m2. At Takeley it was more than £1,000 less at £1,786/m2. At Sandal Magna kinks in the external envelope give a delicious playfulness but also set up expensive junctions. In Takeley rationalism has prevailed. Sandal Magna’s exposed timber, brick and ply give way at Takeley to more ‘standard materials’ in Wigglesworth’s words. Bland acoustic tiles reign over a lower layer of paint. With the coloured cladding and aluminium, it has a certain plastic insubstantiality that detracts from the poetry of the spatial moves. But looking at the building it is clear that invention and thought, fought so hard for by the school, have given it something special, even when the specification couldn’t quite match.