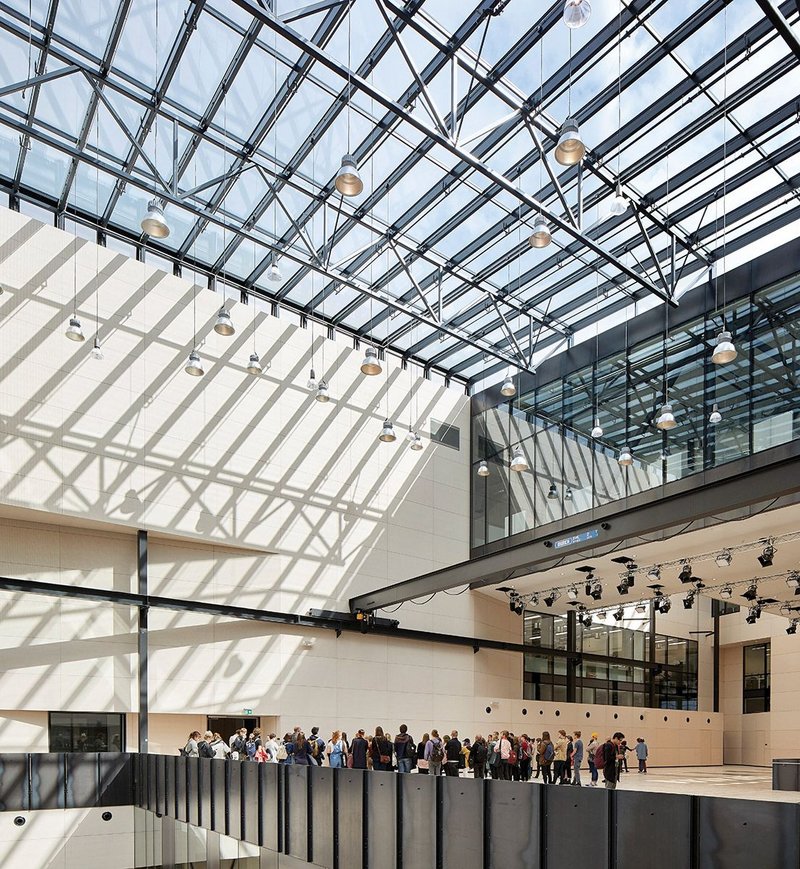 Snøhetta won an international competition for the National Academy of the Arts in Bergen, Norway, in 2005 but the realisation of its £93 million design took 12 years of delays and rethinks. On the shore of Store Lungegårdsvann lake in the shadow of the mountains, its highly reflective, insulated aluminium facade now animates the city’s new eastern fringe.

Here on Norway’s west coast, winter temperatures average a mere -10ºC – inland they may drop to -40ºC – but it allowed sustainable methods to be used in a building that demands large amounts of light and conditioning. Even with screen printing, welding, sawing and gluing going on at the academy, Snøhetta developed an air handling approach that deals with paint, resins, solvents and sawdust using Passivhaus techniques.

Astrid Renata Van Veen, project leader and senior architect on the 15,000m2 project, thinks the 12-year gestation allowed the firm not only to look at more pragmatic approaches, but for technology to develop. By post-recession 2010, the competition entry’s decadent, wing-like ‘open roof’ sailing down to the shore had become an enclosed agora, while 2,500m2 was cut from the brief. ‘But time’s been on our side,’ says Van Veen. ‘The compactness made the design more sustainable, and brought social interaction between departments closer together. That’s made it better all round.’

While this internal restructuring might have transformed the project, it’s the highly reflective, 50% recycled raw aluminium alloy 5083 shifted cassette facade that steals the show. Van Veen says the 950 H111 ­aluminium folded rain screen cladding panels, which stagger 100, 150 or 200mm from the insulation line, generate a layered, staccato effect that picks up the soft Bergen light differently every day. With folds each set at the same angle, it creates further facade modulation by varying the size of the shadow gap between cassettes. But the 0.04 U-value is created via 250mm of Rockwool and 500mm aluminium sandwich panel behind it.

The facade’s solid to void ratio was, says Van Veen, a Venn diagram of energy performance; the need to create daylit studios, and solid walls for art production, resulting in the windows on the side and rear elevations. But the real statement is on the south west, where a 27m by 14m triple-glazed opening gives views out over the lake and inside to the 23m high, 19,000m3 entrance lobby and ‘project space’, a roof-lit volume that is the focus of the complex. 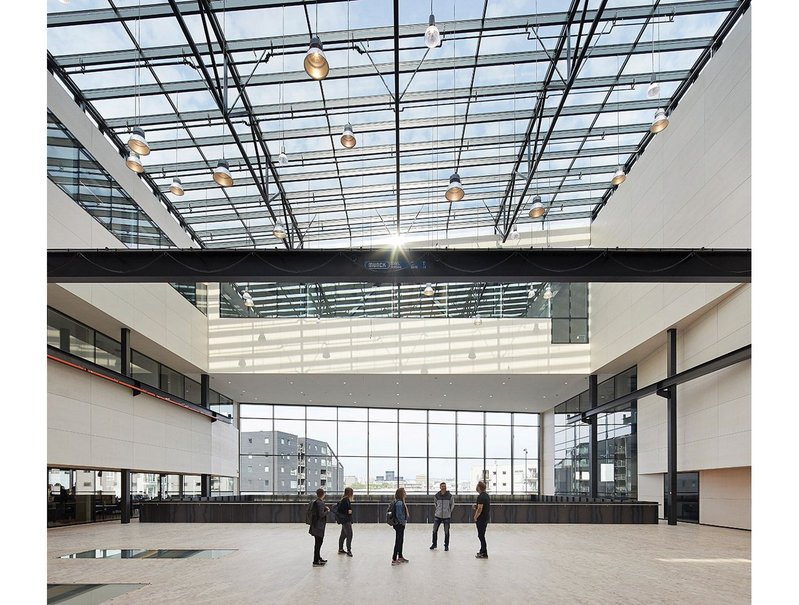 The Project Room: a winter garden to the city treated as an external space enclosed by insulated ‘climate’ walls. Credit: Hufton & Crow

Climate control of this space is an intrinsic part of the heating, cooling and air handling strategy. The key to its environmental sustainability was treating the built volume as if it were an iteration of the original ‘open roof’ idea. ‘It would have involved massive heating and cooling to keep a room this size at a constant 21ºC throughout the year,’ explains Ramboll services engineer and HVAC manager Frode Holthe, ‘so the decision was made to treat it as an open space.’ For a concrete structure using thermal mass principles, this means  the climate line for the building proper runs around the perimeter of the Project Room, so that the space, with its picture window, acts as a form of winter garden, with underfloor heating and tempered but not conditioned air. ‘We wanted to keep the energy commitment here as low as possible, so we allow the temperature in this space to have a wide range of 15-25ºC, with outlet louvres on the south west facade and roof for natural cooling,’ he adds.

The engineers could then start optimising energy use inside. ‘Norwegian codes demand higher rates of air exchange for this typology. Arts buildings use noxious processes, so we needed to ensure proper air filtration.’ Holthe says. ‘There are 11 different air handling units and 35 exhaust systems dealing with high demand areas such as kiln rooms and welding workshops, and intermittent demand, as in the main auditorium and kitchen areas.

‘There’s low specific fan power (SFP) for all the air handling units, with fresh air fed to them via a concrete culvert that pre-heats or pre-cools the air depending on the season,’ he adds. The BMS system regulates air supply in each room, minimising differentials in air flow between spaces to avoid pressurisation and noise issues. The BMS monitors not only air supply rates but CO2 levels too. Holthe says all air handling must be fitted with heat exchangers delivering at least 80% heat recovery.

There’s a similar bespoke approach adopted to heat and cool the building. Warmth is delivered via geothermal heat pump combined with district heating. The heat pump is supplied by nine 200m deep, 140mm diameter vertical boreholes. A mixture of ethanol/water circulates between these and the heat pump evaporator in a closed loop system. This is expected to deliver 85% of the total heating demand to a building which is so well insulated that if the outside temperature exceeds 9ºC, it requires no additional heating. On the coldest days it was decided to augment this with district heating, raising delivery from the heat pump from 50ºC to 60ºC. ‘To raise temperatures by 10ºC using heat pump technology only would be an onerous technical and economic consideration,’ says Ramboll senior heat pump specialist Tor Lystad, adding that the real challenge is meeting the cooling load for this effectively Passivhaus design.

Most of the 100kW process cooling load – largely generated from computer use in the building – is dealt with using boreholes  and a roof-mounted dry cooler as a heat sink, cooling water to 14ºC and returning it at 18ºC. The high design temperature in the process cooling circuit is mostly free cooling. ‘In the summer, comfort cooling (air conditioning) increases cooling load by 280kW, so we have installed ammonia refrigeration plant to deal with peak demand,’ Lystad explains. To cool the lower demand spaces, water is circulated to and from the batteries at a lower 10ºC, with return at 18ºC. He adds that relatively little comfort cooling is needed compared to 24/7 process cooling (and necessary mechanical refrigeration for places like server rooms). As a result design temperatures for the comfort cooling circuit is lower to avoid having to install huge cooling batteries. But there are cooling batteries in each air conditioning system, where cooling water exchanges heat with air. During peak cooling demand, the heat pump operates in refrigeration mode, sending most of the heat to outdoor air via a dry cooler. An ammonia refrigeration plant also gets rid of the condenser heat via a dry cooler. In heating mode, return hot water from the process cooling passes first through the dry cooler and then to the borehole. If the ground temperature exceeds 10ºC all hot water is sent through the ammonia refrigeration plant, the heat pump operates in refrigeration mode, and no more heat is sent to the boreholes.

Lystad explains that it’s a complex interrelationship and connection of systems all monitored and controlled by the central BMS. But it means that with heating, cooling and air handling, the strategy has been to let the Passivhaus plant deal with normal energy requirements, with higher energy demand systems only kicking in at peak demand times. The efficiencies manifested in this approach only came about through the technological advances between design and realisation; benefits that the first cohort of students may begin to feel in Bergen’s long, light summer days.