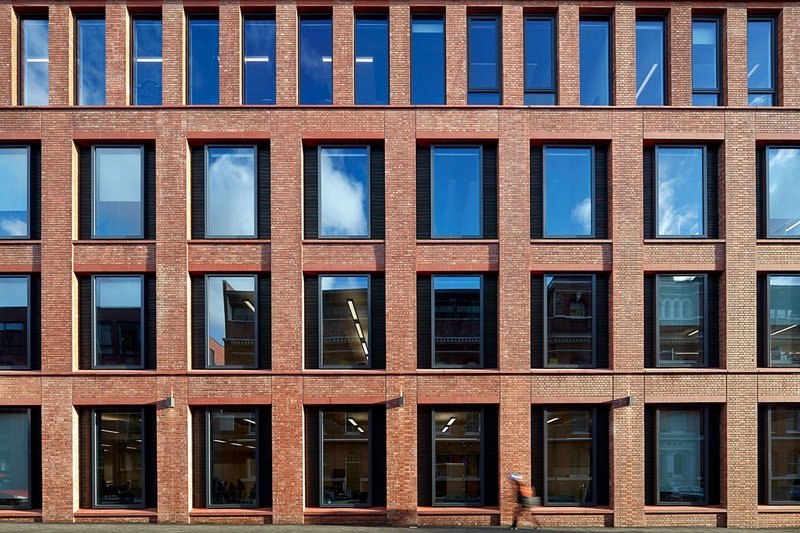 Higher Education is in a state of flux, with many universities searching for a USP that sets them apart from their competitors. Brexit and Covid-19 have exacerbated already tough times and forced organisations to think harder about their academic offer and even their identity.

University College Birmingham (UCB), is a former further education college that made its name in the culinary arts, nurturing exceptional talent, including Michelin starred chefs and leaders in the hospitality industry. Since gaining full university recognition in 2012, it has expanded its academic programme, but without turning its back on its FE origins, still offering courses and apprenticeships for students aged 16+. Although maintaining a wide social reach, this has created the dilemma of having to segment its estate to cater for its different student groups.

The university made a strategic decision to remain in central Birmingham, creating a new campus in the Jewellery Quarter. Moss House, a teaching and social hub, is a ­central part of the second phase of development. UCB is very much embedded in the fabric of the city, highly accessible to students, staff and visitors. Of the city’s five universities, UCB seems to be the one most dedicated to a vocational programme, with specialist teams advising students on employability and cultivating entrepreneurial skills. Birmingham is Europe’s youngest city, with 40% of its population aged between 14 and 25, and the UK’s most entrepreneurial, with more start-up’s per capita than anywhere else. These statistics will no doubt have influenced the university’s decision-making. Conceptually and physically, this project represents the future of learning and the antithesis of privileged students reading Classics in archaic, darkened rooms.

Despite UCB’s significant landholdings in prime areas of the city, it was a challenge to create a coherent FE campus with a ‘heart’ and any sense of intimacy. However, intelligent land acquisition enabled it to assemble adjacent urban blocks around Holland Street, which it hopes to turn into a covered private road in the future, lined with incubation space for fledgling graduate-run businesses. It has already nicknamed this ‘Skills Street’.

To understand Moss House, you need to fully appreciate its function and setting. Designed by Glenn Howells Architects, it is an ambitious project which will help propel the university onto a different stage, creating high quality teaching spaces, a social hub for under- and post-graduate students, and a showcasing opportunity to attract the future cohort. This is a powerful architectural statement which responds to a simple and clear spatial brief, but also gratifies the more intangible aspects of the student experience.

Early in his career, Glenn Howells often talked of ‘the diagram of the building’ which informs the rest of the design. Moss House is no exception, here there is a clear organisation and spatial configuration. As soon as you walk in, you experience the drama of the building, a three storey volume with a staggered staircase, inhabited bridges and adjacent terracing where students can sit, contemplate, work or socialise. This follows a trend that can be seen in other projects where the journey through the building is celebrated – most notably Nicholas Hare’s Student Centre at UCL – but Moss House does not quite go as far as SOM’s Parsons New School in New York, which subtly unfolds and creates a real sense of ambiguity about what is circulation and what is social space. Moss House does not have this level of complexity, but is highly legible and creates a jaw-dropping sense of arrival. The ground floor social spaces, including the ‘Living Room’, have the vibe of a cool American diner that will appeal to both staff and students.

Externally, the building is exquisitely crafted from enduring materials including brick, terracotta and aluminium. The brick slips, in English bond with corner quoins and queen closers, were fastened to insulated precast panels in factory conditions, with ruthless quality control. This exudes a hand-made quality and texture – a manifestation of a meticulously planned and executed design and manufacturing process. Even the car park has a well-composed facade treatment with vertical terracotta baguettes.

The repetitive fenestration pattern is ­derived from the Jewellery Quarter’s well-preserved stock of Victorian and 20th century industrial buildings, with elegantly proportioned windows, which project from a recessed louvred surround. The top floor goes to a narrower window module and is almost made to look like a vertical extension. The façade gives few clues about the brave manipulation of internal volumes, which adds to the element of surprise and spectacle.

Like some of the neighbouring re-purposed factories, Moss House has an in-built flexibility which futureproofs it to respond to changing patterns of use. The in-situ concrete frame sits on a 7.5m grid with ‘soft walls’ in between which could be removed or reconfigured. The top floor ‘human performance’ gymnasium sits on a jack-up floor, acoustically isolating it from the quiet spaces below, so both can be used concurrently. The 4.5m floor-to-floor height provides well-proportioned classrooms as well as headroom for lecture theatres with raked seating.

Generous circulation spaces and the avoidance of long, narrow internal corridors have made it possible to adapt to a Covid-secure environment, where classes are programmed with reduced numbers and vertical and lateral circulation have been segregated to manage the directional  flow of students. Like other universities, UCB has stepped up online delivery, but did not want to over-rely on this form of learning, which it feels devalues students’ social experience (particularly for freshers). Despite that ‘timetabling nightmare’, the design of Moss House has allowed the building to be fully operational and take up slack from other parts of the campus that cannot function as effectively. So the timing of its completion is important for delivery of the 20/21 academic programme.

The concrete frame itself has an ultra-fine surface finish which was painstakingly prototyped on site, testing special shuttering with different resin facings until the right one was found. The result is almost a sensuous surface, where (jointless) columns and ceilings are left exposed, the latter having well co-ordinated hanging services and acoustic treatments. At the end of the main vista is an in-situ feature wall with carefully co­ordinated joints and tie-rod holes. Slatted oak lines the crown of the atrium, concealing acoustic baffling and the extract system. This top-lit space has a sublime quality of light, even on the most overcast days.

Classroom walls are made of Lignacite blocks, an inexpensive and acoustically efficient alternative to dry-lining. A neatly stackbonded arrangement avoids the feel of a municipal sports hall, but one can only imagine some consternation in GHA’s office about the cut block required to co-ordinate with the concrete frame... Nevertheless, there is a brutal honesty and unpretentiousness about the material palette which works well and will require little maintenance.

Moss House has an enduring quality and seems to achieve a sense of timelessness which responds to its heritage context with calm confidence. Possibly the 21st century’s most important new building in the Jewellery Quarter, it has all the attributes to become a listed building of the future.

Bob Ghosh RIBA, is founder and director of K4 Architects, Birmingham and Herefordshire