There is so much more to the Grafton Way Building than meets the eye. That’s a simple statement of fact – a large chunk of this extraordinary cancer and surgical centre at London’s University College Hospital is out of sight, in a basement as big as the Albert Hall – and also true in a more general sense. Its refined appearance and serene interiors give little hint of the challenges overcome in what contractor Bouygues says is one of the most complex public buildings ever undertaken.

Alongside operating theatres, a critical care unit, imaging suites and haematology wards – each with its own support services, plant and access requirements – the 37,000m2 building on the corner of Tottenham Court Road and Grafton Way contains the UK’s second centre for proton beam therapy (PBT), an advanced form of radiotherapy.

These disparate facilities have been organised with great sensitivity on a constrained site by Scott Tallon Walker Architects and Edward Williams Architects. The firms were paired by the NHS client in a shrewd bit of matchmaking: Sheila Carney, lead director of STWA’s London office, has experience in both healthcare and nuclear shielding; Edward Williams’ practice was brand new when appointed in 2011, but as a partner at Hopkins he had designed the adjacent MacMillan Cancer Centre and a masterplan for the hospital, so knew the quirks of the Bloomsbury Conservation Area.

With a height restriction imposed by protected views, creating the requisite space meant digging down 29m. Much of the basement is occupied by the PBT centre – a triple-height bunker with concrete walls up to 5m thick which would, in any case, have been too heavy to put up high and too obstructive to locate at ground level. It sits below two storeys of plant and a surgical floor, linked to tunnels though which patients are ferried from around the campus. ‘It is a fantastic fruit salad’, says Williams, ‘but there’s a strong logic to where things are’.

Above ground, a six-storey L-shaped wing marries up with a neighbouring 1930s apartment building to restore a perimeter block. More space is provided in a smaller building set in the central courtyard, distinguished by an exposed steel frame. The space between is enclosed to form a lofty atrium.

Glazed facades to surrounding streets are screened by a delicate aluminium brises-soleil, broken up into bays that loosely recall nearby Victorian mansion blocks. The ground floor is weightier, framed by chunky columns and a tapering slab of precast concrete, but remarkably open. From a deeply recessed ambulance bay on Grafton Way one can see into the heart of the building.

Subtle contextual relationships are also developed in the plan. My tour with the architects began at the main entrance on the chamfered north-east corner, which faces the heart of the hospital campus. It sets up a diagonal route through a timber-lined foyer to the atrium that picks up on the angles of the 1906 Cruciform Building opposite. More importantly it is direct and intuitive, removing stress from patient journeys.

The brief was that it shouldn’t feel like a typical NHS hospital. There’s no Virgin-Mary-blue lino

The atrium is an awesome space, with ribbon-like staircases descending from high-level bridges between the buildings and light pouring in from all sides, but calmed by STWA’s interior design. Artworks line the walls and soft colours evoke gardens and the sky. ‘The brief was that it shouldn’t feel like a typical NHS hospital’, says Carney. ‘There’s no Virgin-Mary-blue lino flooring’.

We head up to the wards, where high-ceilinged rooms are double-loaded on wide corridors. A few face the atrium but most look out to the streets. Here the rationale for the facade design is obvious, as glass walls make the most of daylight and views – hugely valuable to immuno-compromised patients who spend months in isolation. ‘There’s a big drive in hospital design towards patient wellbeing but it’s not just a “nice-to-have”,’ says Carney. ‘There’s lots of evidence for the medical benefits’.

Patient-controlled blinds are integrated into triple-glazed units to avoid harbouring germs, and can be repaired from gangways outside so sterile conditions are not compromised. Such details are representative of an anticipatory intelligence at work through the whole building, with innumerable problems resolved by design in a coherent, understated way.

From the wards we cross a bridge to a sheltered rooftop garden above the courtyard block, where patients are recuperating among planters filled with medicinal herbs and shrubs. Giant airducts are neatly gathered in steel frames at both ends, but exposed and celebrated with a Pompidou-esque pop of colour. ‘Hospitals are technical buildings, so we don’t apologise if that’s occasionally on display’, says Williams. ‘The question is how to make it delightful’.

Down in the subterranean PBT centre, where clever lighting and natural materials create a relaxed atmosphere in waiting areas, the only evidence of the technology at work are beds in each of four treatment bays that resemble the bridge of the Starship Enterprise. These intimate little rooms set within a dense maze of concrete are known as ‘gantries’, because giant cranes, out of sight but occupying whole floors above and below, rotate magnets that direct the flow of protons from a on-site particle accelerator.

There is something particularly powerful about the idea of so much stuff – space, structure, money, know-how – brought into conjunction to focus invisible beams so precisely on a human body, but I found every part of the Grafton Way Building surprisingly moving. The skill and compassion that have shaped it will make a real difference to people at the worst time in their lives. 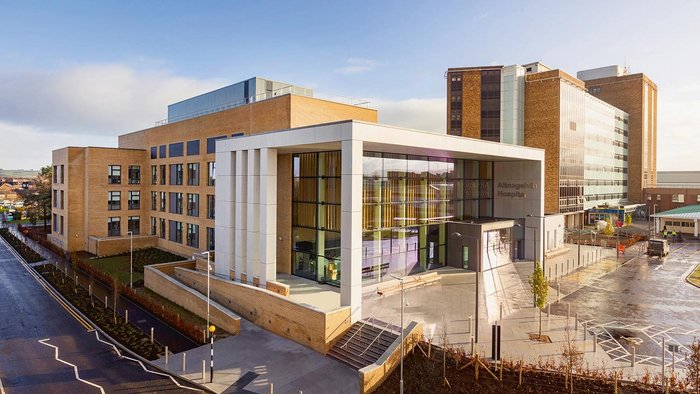