Assembled on the university procurement production line, can the University of Bath’s new architecture school building give students the environment to thrive?

Drawings and mugs litter the tables with evidence of collaboration, pot plants are dotted around, lap tops open as students design and discuss. This is one of three studios at the University of Bath’s architecture school, recently completed by architect AHR. Seen from the broad balustrade of the mezzanine above, it is a scene of productive pleasure, the fourth year architecture and engineering students and working up schemes together in what looks like the best sort of education.

This new building is all about the studios. ‘Universities are coming to understand that their value is in collaboration,’ says head of architecture Professor Alex Wright. With AHR project director Gary Overton he has battled to ensure the conditions are right for students to come together, rather than hide away at home. This is a long way from the bright booths of ‘collaboration hubs’ in many new university buildings. The studios are the students’ workspace, actively inhabited perhaps because this campus takes some getting to; once you have caught the bus up the hill from the city you are committed for the day.

Until this structure was completed, architecture students were housed in 6 East, one of the Smithsons-designed buildings that used to edge this 1960s RMJM campus. The smaller rooms, offset geometry and often low ceiling heights (this building can only be ­­understood in three dimensions) lent intimacy to the experience. In year two and seven students will have it still, as they use the top floor studios. But with student rolls rising – this year’s intake was up to 110 from 75 in 2012 – space was getting very squashed and staff were housed in numerous different buildings.

So the school planned for a new building that was included in the university’s 2020 masterplan for densification of the campus. RMJM had drawn a megastructure line in the landscape – riven by a street and with trees sunk into courtyards. In the late seventies and eighties the Smithsons wrote about placing their five buildings around the fringed edge of a mat of the campus. But both plans have been overtaken by blocks of student housing, a large sports halls and, alongside the architecture school, the engineering faculty labs. Hedging this development in have been the planning rules to keep the university’s growth invisible from the surrounding Area of Outstanding Natural Beauty and the city itself. Overton, who took his part III here and ran a design studio at the school before designing this building, says that what was a university sitting in a landscape has flipped over to one facing a (rather constrained) park.

The new 4 East South building had to formalise this relationship, replacing a line of poplars and the messy gas canisters at the back of the engineering labs with a tidy edge to the ‘park’. On this facade the regular rhythm of an extruded frame in limestone-coloured precast concrete maintains the stretching verticality of those felled poplars. Behind and above all this rises the bronze anodised frame, giving the building a little more depth and presence but leaving ground floor views free. The facade for the adjoining office for the computing services department  is stripped and subservient. Round the back is the face it presents to the rest of the university: a rather bleak service road and almost unarticulated facade. But the north facing stretches of cast glass planks onto the studios mean that it does at least come to life after dark – and through the night, as this building is always open in term time. This lantern effect is the only external clue to the very particular studio spaces inside.

In a way one would like to insulate students in the comfort of the studios. And to a certain extent that has been achieved thanks to certain quiet manoeuvring in the tense production line of modern-day university procurement. Edging the double-height studios are more intimate crit bays under the mezzanine, where slim shutters open up narrow views on either side of a screen. Here tutors can have quiet informal conversations with their students and at the end of year show the studios can take them over. And students can make their own tea or coffee in one of the gyp rooms – a Cambridge nomenclature that enabled the small, stripped-back kitchens to slip onto the plan without resistance from the estates department.

In response to a move to save money by having just a single bank of lifts in the middle of the plan, away from the natural entrance from the old building, the architect and school suggested running a corridor between the front and side entrances on the south facade. This corridor grew in width and scope into a de facto gallery and meeting place overlooking the park, as outward looking as the studios are internally focused. It rescues the ground floor, where the workshop suffers from the late addition of a suspended ceiling and convoluted access, giving it the air of cheaply converted offices despite its thousands of pounds of digital equipment.

But there is no insulation from the politics and economics of education, the long term debt that students are buying their education with and the long running battle over the university vice-chancellor’s salary, which was being fought even as I visited, posters on the columns, protests in the campus, unrest among the wider staff. The vice-chancellor’s request that the building itself look like Bath stone influenced its polite office park modernism – which could be interpreted as handsome if the light fell just right. You might want to applaud even a well paid chancellor’s sensitivity until you realise that the nearby blue-clad Chancellor’s Building was shortlisted for the Carbuncle Cup not so long ago.

Inside there is room to breathe, to explore and experiment, to test and draw and test again. The ground floor gallery and two large studios and the hidden away offices of the mezzanine will no doubt influence students in years to come, though there are unlikely to be the sort of celebrations that ran through 2017 to celebrate the Smithsons legacy in the city. The complex, ideas-rich Smithsons’ 6 East may seem to have little relationship with the rational grid of the new 4 East South but there are some parallels on the sly. As you sidle up to the Smithsons’ entrance, up stairs, to an unannounced door, so at the new building, architecture students slip in at the side door, a sun-drenched stolen space leading them up to the studios that this building hardly hints at; illicit unlooked-for pleasures in a rational design factory.

Number of pupils Space for 400 students 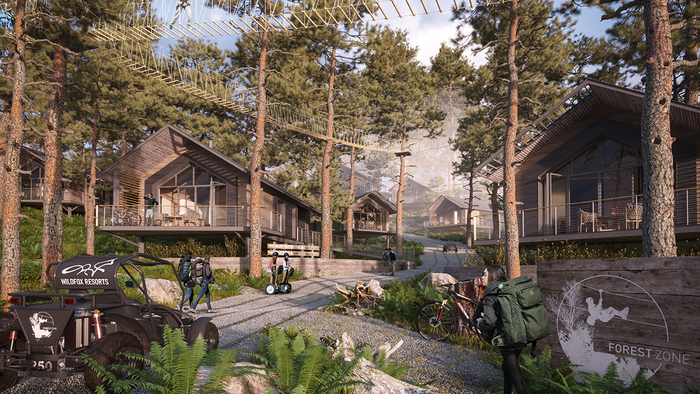 Page of Consents: Forward-looking for living, learning and leisure