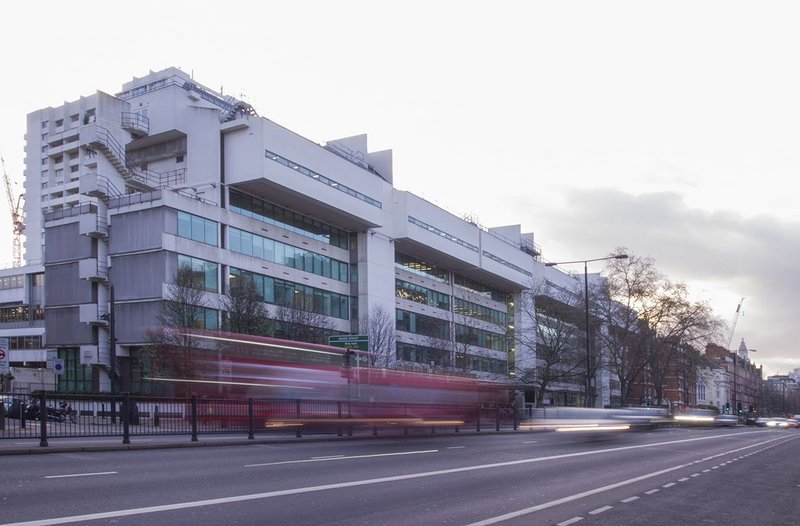 From Marylebone Road the school of architecture can be identified by the fifth floor canted volumes. Credit: Richard McDonald

‘It is like a hat on the roof of the building,’ says Dr Harry Charrington. He looks admiringly at the drawing of the section of the University of Westminster’s architecture studios. Initiated by the Inner London Education Authority, the concrete megastructure runs 120m alongside the main drag of London’s Marylebone Road, opposite the wax works of Madame Tussauds.  This top section is the architecture school, a long street with mezzanines canted out from it. It’s simple and it works for studio teaching.

But when Charrington arrived as head of the school in 2014, forty per cent of its space was no longer suitable for use as studios. Most had been chopped up into offices and seminar rooms. Faced with a huge number of architecture schools nationally, and especially in London, boasting new or jazzed up buildings, Charrington made the case that Westminster needed to look again at the Westminster school’s accommodation. He argued that with around 40% more students since it was completed in 1971, the school needed more space. He suggested they went back to the future and open it up again.

Jestico + Whiles had been on the university’s framework for some time when it got the call to come in and start – right away. It was presented with consultation and a clear brief but little on how exactly students would be arranged. Flexibility was the essence. The two-stage design and build contract was let in just one month with the contractor arriving as classes finished, and with the first four of six bays completed before students returned that September.

Taking out partitions might seem simple but there was asbestos to contend with – an issue that the previous refurbishment had dodged. The work also had to be done over a very tight period – there was no decant space like the Bartlett had enjoyed just up the road. Around the perimeter walls, removing asbestos brought extra flexibility, but the practice made a real difference on the central soffits, where it exposed the concrete ribs. Sealing the ribs without decorating them improved the ventilation strategy and as well as adding a lift to the studios by increasing their volume.

Three circulation cores divide the six longitudinal bays, but now from the mezzanine you get a sense of the diminishing perspective over this long building through square cut-outs at high level, the frames’ wired glass replaced with big panes of fire resistant glass. The easternmost bay has had a low barrel-vaulted ceiling removed and is glazed to the mezzanine, which can either be operated separately or, with an audio-loop, provide overspill for the most popular lectures.

Offices have been pepperpotted at the ends of the bays, rather than clustered defensively together, so everyone is part of the studio culture. And while the original brief didn’t mark out territories, panels and specially designed hinged panels and storage units, all asking for designs to be pinned up, now temporarily delineate inhabitation. When I visited each of the bays was comfortably divided into two or three, seminars and quiet working side by side, all brought together by the lofty space over its sunny yellow floor. A happy place to study, high above the confusion of London’s traffic outside.