A new science centre by ORMS brings balance to architectural styles at Uppingham School, as well as to its academic strengths 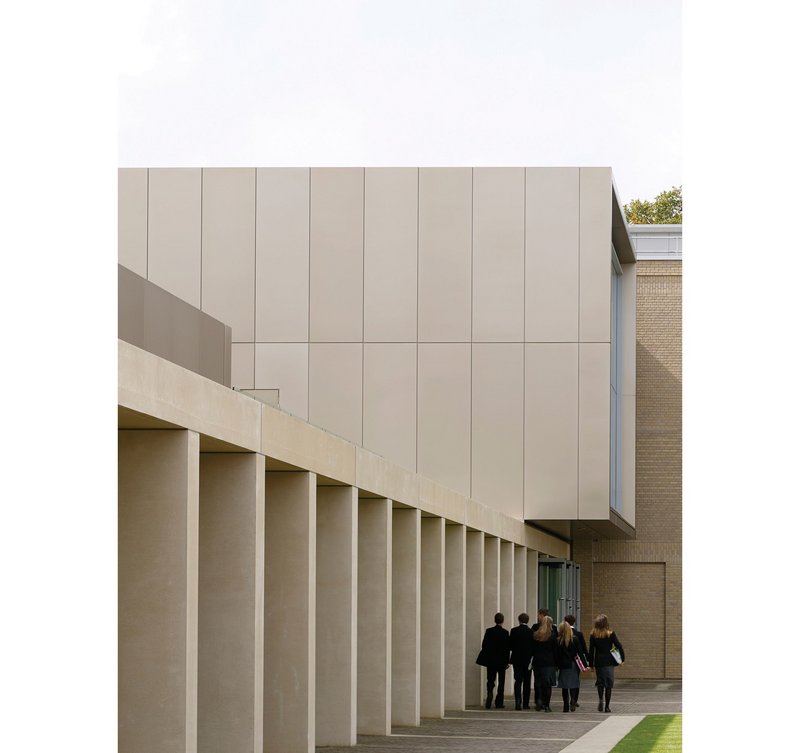 Off to lessons at Uppingham.

The small soft-stoned high streets of Rutland start to appear as we travel towards the market town of Uppingham, the Clipsham golden and warm-edged, the ironstone redder as if to reflect a non-existent sunset. Drawing into the town the cottages continue, with larger buildings now as this 800 pupil boarding school hoves into site. Like Oxbridge quads and courts they don’t give much away to the street, but still sit like warm memorials to the nobility and history of the establishment.

It is not something the Western Quad, further along the road, has ever borne the weight of. And its new science centre, the school’s third building by ORMS, has a markedly different character to those around it. Here, its edges clipped into shape, the Clipsham stone is converted into a modernist facade with classical overtones using cast stone edges to Clipsham panels, colonnades and an urbane grid and regularity.

This building strives for a Chipperfield maturity and has a diagram of labs, connections and lecture theatre, echoing Stanton Williams’ Sainsbury Laboratory in Cambridge – though drawn before that was out of the ground.  L-shaped, it creates and protects a new courtyard. But unlike its historic counterparts, the building opens its heart to the town with big windows onto the grand spiral staircase and gallery, the green of the two-storey greenhouse behind the glass of the upper levels as intriguing as the stair. No-one here would use the word shop window but that is its effect on the quiet road. 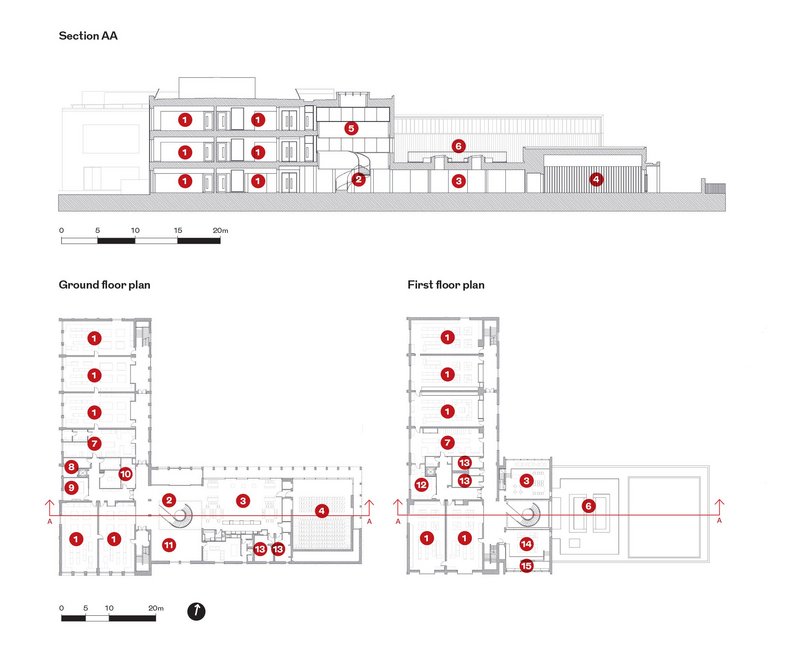 Most of the smart suited boys and girls in long winter skirts will be more interested in the other side of the building, its stone-encased grass rectangles looking onto the arts buildings. Designed by ex-pupil Piers Gough, it is set up for civilised discourse between arts and science with a reordering by ORMS.

It is easy to remember this science centre as a handsome, neutral colour corner of a quad – a unifying force. But as with a sliver of limestone under a microscope, the detail is less simple. The three west-facing storeys of the science laboratories are brick-clad, a fairly meaningless gesture towards nearby domestic architecture in this context, but nicely done. Then a box of anodised aluminium, ‘the jewel’, sits on the roof with the library facing out. This same material also pops up over the lecture theatre, though rarely looking the same as the precise angle of light changes it massively. Add to this multicoloured stripes in behind the colonnade when the lecture theatre is shut down, and the simple turns complex.

If the exterior takes tradition and sharpens it up, the interior takes barriers and breaks them down. Or so it is intended. The taxonomy of the building is a little confusing. It is called a science centre but serves morning snacks to all at the buttery, dishes out extra-curricula learning in the already well-used lecture theatre, and has a resource centre and gallery space that speaks to the art department as much as science masters – and to those who like stylish stairs.

For the headmaster this is all about making science a central part of a school that is traditionally strongest in arts (for alumni see the pages of The Stage, the Daily Mail, or just turn on the TV). It is also about preparing students for university, though with its generously proportioned classrooms, circulation and beautiful stair they would only get this experience at top flight universities or, in later life, in a high spec office. For both school and town it creates a very grown up language for this century.

Mechanical and electrical and acoustics: Ramboll