The Netherlands’ ingenious but flawed defence system is celebrated in Anne Holtrop Studio’s museum, in a design that ebbs and flows with its setting 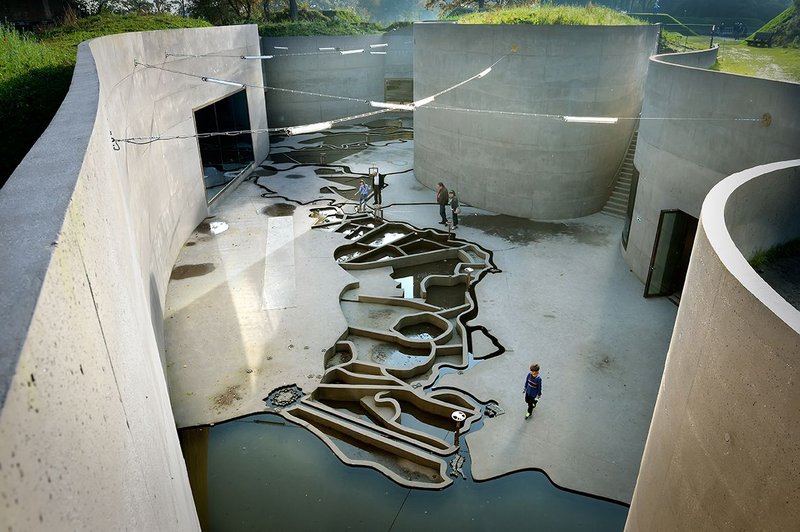 The interactive model with its bronze cast forts as seen from the building’s green roofscape. The way the sluices can be opened and closed to play around with flooding is very popular with younger visitors and was unique to Holtrop’s proposal for the model aspect of the brief. Credit: Mike Bink

In a country with a small population and a flat topography, the Netherlands has struggled throughout its history to defend itself from the invading forces of larger countries: France, Germany and Spain. Without natural defences, the Dutch had to come up with innovative defence solutions. They built fortresses and fortified cities, but arguably their most unexpected weapon was water.

The Netherlands is well known for its relationship with water. No less than half the country is continuously threatened by it. One quarter lies below sea level and another floods whenever its major rivers burst their banks. However, the nation has made friends with the water and has at times opened its locks and breached its dikes deliberately to keep other intruders at bay.

This unique defence system is called the Dutch Waterline – and consists of several different frontiers planned and built at different times but formalised in the early 17th century by William of Orange’s sons. Water would be knee-high: too deep to wade through and too shallow for boats. Where the barrier was at its narrowest forts were constructed, armed with cannons.

In theory the Waterline was simple, but in practice, given that it concerned a significantly large area, it was complex. Sluices had to be opened and dikes breached in just the right places, after which it would take at least a week before the water was high enough. What’s more, home troops had to make sure farmers, whose harvests would be lost, did not sabotage the operation.

As a result the Dutch Waterline was rarely implemented. The Old Dutch Waterline was put into operation twice, both times against the French. It kept them at bay in 1672, but in the winter of 1794/95, the water froze so hard that they crossed the ice and occupied the country.

The New Waterline, established in 1815 by King William I to renew and extend the old defence after 18 years of French occupation, never saw any fighting. It effectively turned the western regions into an island. The biggest and most expensive project ever undertaken in the Netherlands, it stretched 85km and was prepared for use three times, coming to nothing on each occasion.

Subsequently something of a white elephant and national joke, the Dutch Waterline, in particular the New Dutch Waterline, is the subject of this new museum by Anne Holtrop Studio. Near Utrecht, the building is sited within the ramparts of Fort Vechten, one of the larger of the 40 fortresses and six fortified towns.

The museum is part of a bigger plan for the site, which had been decommissioned in 1951 and left to nature or occasional parties. A landscape design by West 8 was already under way by 2010, when the Province of Utrecht opened a small invited competition for a museum to tell the story of the defence line, restoring not just the fort but possibly some of the Waterline’s national reputation too.

Invitees had to be aged under 40. The building had to be submerged, had to be entered via the existing barracks building and would cover 2000m2 including an auditorium and a model map of the Waterline.

Holtrop’s winning proposal was to let the heights of the site inform the shape of the building, burying the museum spaces in voids created beneath. In places these are punched in to create two freeform enclosed courtyards in the centre, the largest displaying a playful interactive model of the Waterline.

In plan, the new museum touches the existing building only lightly at the entrance and is otherwise a near rectangle placed on a slant within the old fort construction, which is not discernible from either the exterior or visit round. The architect didn’t change any of the heights to make them nicer or more appealing, and there were no concessions on this first concept at all, even though it was Holtrop’s first permanent project. Starting with the reception and shop, the exhibition spaces ramp up slightly and wrap around the main courtyard, cut and varying in height according to the original topography of the site above.

Huge brass-framed windows, filled with curved glass and slotted into a full concrete construction, bring light to these otherwise buried spaces while connecting with a scaled interactive model of the Dutch Waterline built into the fabric of the building in the courtyard outside. Interior and exterior walls and floors are the same brown tinted concrete – which breaks with the white walls of museum and heightens the subterranean feeling – accentuated by a rough sandblasted texture and faint differences in layers as it was poured. In the landscape above, the building emerges only as a continuous concrete balustrade around the courtyards, making it a discreet addition to the landscape.