Ask anyone the most significant changes of the last century and telecoms will come pretty high on the list. So the Porthcurno Telegraph Museum, housed in what was once the hub of British communication with the rest of the world, would have donors clamouring to contribute to its refurbishment, wouldn’t it? Think again, says Eleanor Young

In a beautiful valley near the end of Cornwall, dug deep into the hillside, is what was once the hub of the UK’s communications with the outside world.  In a hut near the idyllic beach the cables can still be seen, labelled India, America or South Africa.  But the very remoteness and natural landscape that made it perfect for telecommunications in the early 20th Century is what now renders funding hard to come by.

Fibre optics eventually spelt the end to the active life of Porthcurno cable station, although some of today’s still land here but pass beneath Porthcurno en route for a new terminating station further inland. During World War Two Cornish miners dug tunnels to protect those operating vital communications from bombardment. In them you can still see the machines that sent and received telegrams, where volunteers, some of whom worked them across the world, explain the technology from before Marconi to today. A Trip Advisor description of Porthcurno Telegraph Museum as ‘snakes and ladders’ reflects the topography of the site, which requires a climb from the car park to the plain cable station with its coffee bar and introduction before you are sent off into the tunnels and to clamber up the ladders of the old emergency escape routes if you wish.

How to pull a crowd

This is the museum that MJ Long found when Long and Kentish started work here in 2009. It was before the round one Heritage Lottery Fund bid had been put in and required clear thinking about how the museum could make itself more accessible by giving the remarkable place and its lovely artefacts (think brass and leather) more congenial surroundings to draw in visitors and give them a context. There isn’t much space for that in the existing museum.

Long describes Eastern House, the much added-to 1904 cable station at the top of the hill,  as a ‘big dumb white box’.  It is the sort of concrete frame that Cable and Wireless built all over the world, listed grade 2 in 2008 for its very survival at the heart of the most important telegraph site of the British Empire. The building had a lighter upper floor that served as a telegraph room and it was also used as a communications college in the sixties. Inside is a mish mash of activities; most, like the archive, are normally off limits to the public with just a small space for exhibitions.

But fitting a better exhibition space to entice people up from the car park was hard. Project manager Henrietta Boex describes it as a ‘game of Chinese tiles’. Moving the tiles around to make the right picture needed a rethink. Long and Kentish proposed co-opting the maintenance building at the bottom of the slope for the archive, offices and a learning centre – it will also give visitors a little taster of the museum. In essence it is an ‘enabling building’ to free up Eastern House. This went into the round 1 HLF bid for £750,000 as a refurb with fairly limited costs.

Work on Eastern House will be Phase 2, with a glass-covered link to the tunnels (this is after all a rainy day destination for many visitors). Removal of partitions will give the exhibition most of the top floor but there will be no messing with the structure. Exhibition designer Ab Rogers Design has just been appointed.

A controlled space for the Cable and Wireless archive is fronted by education and research rooms in Long and Kentish’s new building.

Boex jokes that she didn’t put enough in the bid for project management, which is why she is now doing the role part time.  But with £100,000 of development money under its belt to take it up to Stage D – half from the HLF, half from the museum itself – the team could get to grips with what was needed. And that was more money. The museum estimated £2.64m as a total project cost, so the fundraising had to scale up accordingly.  ‘You can’t submit a round two bid to HLF unless you have match funding,’ explains Boex. ‘Lots of projects fail there.’ The £450,000 HLF bid was just in the sphere of the organisation’s regional small grants for round 2 and the museum was advised to keep its bid below £1.5m or risk going up against the ‘big boys’ for funds. It secured £1.4m.

One of the first through the door was the Clore Duffield Foundation with £125,000 from its learning spaces programme for the building at the bottom of the hill. The need for archive standards means it will be a new build. Long and Kentish has designed it simply, with long glulam beams that allow the front of the building some variation – a valley roof or an overhang depending on the function. Behind, a clerestory, before the low volume of the archive, admits some light despite facing the hillside.

Those first few donors, however small, were particularly welcome to Boex. The museum got a modest grant from the Edith Murphy Foundation early on. ‘It was hugely encouraging at the beginning of the journey,’ she says.  Then the foundation came along to a fundraising event and gave another, unexpected, chunk. For Boex it is often as hard to work out why money is forthcoming from one trust as it is to work out why it is not from another. An application to the Trusthouse Charitable Foundation for £30,000 led to an invitation to submit for its ‘supergrant’ of £100,000. ‘You do pitch slightly differently to each individual organisation,’ says Boex. She explains the approach as ‘This is why we are good news for you...’

But despite all the boxes Porthcurno ticks in fundraising terms, from a fantastic collection to a community resource in a deprived area and its claim to be the only ‘working’ telegraph station in the world, Boex is very aware of its small size in the world of trusts and its remoteness from sources of funds. Attending the London launch of the Clore Duffield Foundation’s £8.2m disbursement, Boex noted that little Porthcurno was up there with the big names. ‘There was the National Theatre, Turner Contemporary and the Royal Shakespeare Company,’ she lists, in amused awe.

‘It is hard to raise money in the provinces,’ she admits. In workshops with the HLF on its Catalyst: Endowments Fund, which matches corporate giving, she has made the point that she has no large corporations with corporate social responsibility strategies on her doorstep in south west Cornwall, nor individuals of high net worth. The obvious source, Cable and Wireless, pays a retainer to look after its archive but has shown no interest in a major grant to the capital investment. Other industry giants have also disappointed: years of chasing Google came to nothing, even though it recently gave a substantial figure to the Science Museum’s multi million pound Making Modern Communications gallery project, which shares some historic ground as Porthcurno.

‘Fundraising is very London-centric. It helps if you have a case officer on your side – they go to lunch with others and say, “Have you been down there? You must take the family”. We’ve had three or four such visits’

Most the funding has arrived without strings attached. Dedicated rooms and the keen interest of live philanthropists have not influenced this little museum. However, visits from keen case officers from trusts and foundations can make a difference says Boex. The Headley Trust’s case officer came down to Porthcurno. ‘She was such an enthusiast,’ says Boex. ‘You see fundraising is very London-centric. It helps if you have a case officer on your side – they go out to lunch with others and maybe say, “Have you been down there? You must take the family”.  We have now had three or four such visits.’ She is convinced this is the best way to win funding for Porthcurno. ‘If I can get people to the museum they get the point of the project.’

On the other side of Cornwall at Porthmeor Studios, Long has been a vital part of the fundraising process: a small book explaining the process with her lovely drawings and being wheeled out regularly to talk to funders. Equally at the National Maritime Museum Cornwall and the Jewish Museum in Camden, London she has helped in fund-raising discussions. But at Porthcurno these skills have yet to be put to use. With or without Long, Boex has to keep up her work with funders and potential funders. ‘It is a long term relationship,’ she says. ‘The money is not instant, you don’t always get it first time, you have to build relationships and there are some very long gestation periods.’

There are frustrations for Long. The plastic windows, fitted just 10 years ago before the cable station was listed, are unlikely to be replaced in the budget. Long is fighting for at least two original-style timber windows, not least because she sees the potential of the plastic windows to derail the natural ventilation strategy as their top opening combined with blowy blinds mean the windows usually remain closed. ‘The budget is so limited it can’t even support basic things like ventilation and a new roof,’ says Long. There has been discussion about whether it can run to rewiring – a crazy thing to leave out in Long’s view, in a world of multimedia exhibitions. ‘We haven’t any fat in the budget,’ she concludes.

Boex is delighted with progress on site: the archive’s massive beam and some blockwork are now up. But she has reservations. ‘You know what it is like, we’ve done this beautiful building and we’re going to have to add plastic handles,’ she says. Boex is preparing to get back on the phone to funders, but it is a hard time to be passing round the begging bowl. 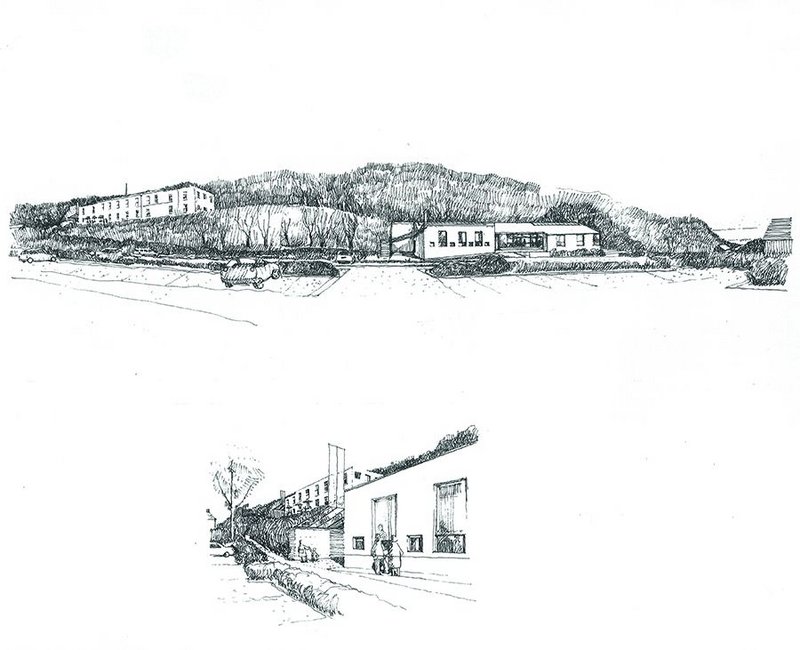 From much of the car park the tunnels are invisible, tucked away behind the old cable station. The new building should offer enough of a taster to encourage visitors to make the climb.