John Pawson and OMA have shaped a spacious new building beneath Kensington’s famous hyperbolic paraboloid. Can the new Design Museum pull in the crowds it needs? 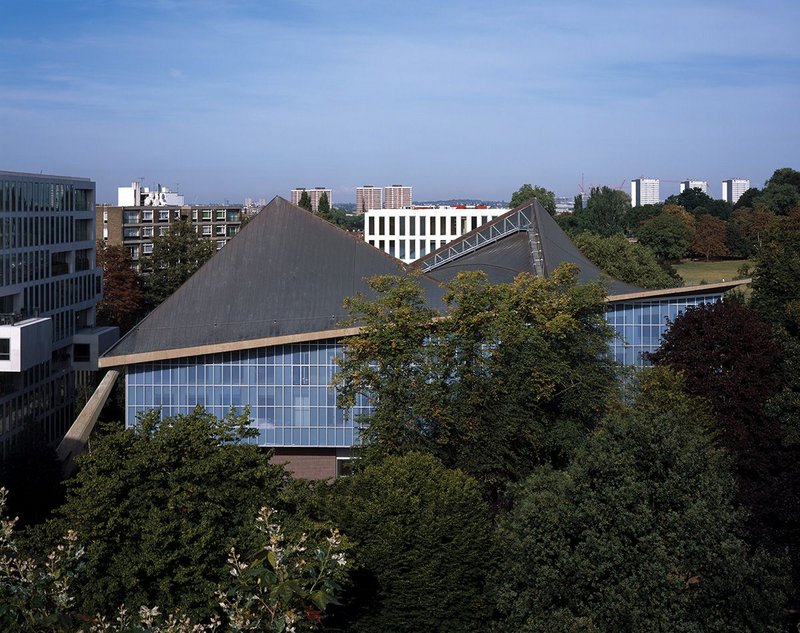 The new £83 million Design Museum in Kensington inhabits the ‘bastard’ hyperbolic paraboloid form of the grade II*-listed 1962 former Commonwealth Institute by the original RMJM, but this is anything but a refurbishment. Beneath that roof – expensively suspended in the air like an umbrella during construction while its interior was totally eviscerated and a large basement dug beneath it – is a brand new building, including the walls.

The whole thing is now a symmetrical square-plan discrete object but originally it also had a rectangular brick-and-concrete brutalist administration wing slicing across its western corner. Its listed landscape setting by Dame Sylvia Crowe has also vanished, beneath the three Portland stone-clad OMA ultraprime apartment blocks (‘Holland Green’) that have helped to pay for the new museum.  And yet, while it has changed radically, it has not changed utterly. The place still has plenty of character. This is quite some achievement.

Some of this is down to OMA which was in overall charge of the whole development, and the rest is down to the interior architecture of John Pawson. Externally, for instance, what were originally concrete-block walls with opaque blue-glass cladding are now concrete-framed with translucent cladding, the blue tint achieved with fritting. The quality of landscape, though there is less of it, is good and there are echoes of the old place – such as clusters of the original commonwealth-nations flagpoles and fountains in the new entrance plaza. And although the building is now partially masked from the street by the new blocks, it does peep through because those blocks are arranged on the same grid, at 45 degrees to the street.

Inside, it’s all about lashings of circulation space. Pawson has stayed true to the principle of this being an atrium building rising to the underside of the roof with its clerestory glazing: it’s just that his atrium is rectilinear rather than curvy.  There is so much space, indeed, that this almost seems an over-reaction to the problem of the previous Design Museum in Bermondsey with its tight little lobby.  In contrast, the Kensington version, at three times the floorspace overall, positively sprawls. Pawson clearly sees the place as a public agora. Everywhere there are wooden benches – and leather ones, in the case of the grand staircase rising from the entrance hall, which doubles as informal auditorium seating.  This is a space one can readily imagine being used for fashion shows. There’s a café and a shop on this level, and Pawson has come up with a rather elegant solution to the security-shutter problem in such places for after-hours events: the shop can be sealed off from the main space by a gold-filigree curtain that is tougher than it looks.

As for the galleries, there are three: one in the basement, one on the ground floor and one for the permanent collection on the top (second) floor. A fourth, highly flexible large ‘events space’ that can be divided up in various ways, is served by the museum’s goods lift and is capable of staging pop-up exhibitions – although its primary purpose is to be rented out. A 200-seat auditorium in the basement is also aimed as much at the conference trade as at design events.  As well as the café there is the new Conran-run ‘Parabola’ restaurant on level  2 – successor to the Blueprint Café in the old place – and a decent-sized members’ room. There’s also a separate design shop out towards the High Street on the ground level of one of the apartment blocks.

The museum needs to generate a lot of money by these various means because it will cost a lot to run. I was amazed by the size of the administration office, which looks like a large architects’ studio and houses an 80-strong staff – rising to 120 with volunteers. Will enough design-curious people make it out to this end of Kensington to justify the overheads? Well, the plan is for up to 60,000 school pupils a year: they get a dedicated entrance, and the first-floor education rooms are scaled accordingly.

Pawson is known as a minimalist but here, though restrained as ever, he is scarcely extreme. His materials are few and good: terrazzo flooring below, pale oak above, along with oak wall linings and bespoke furniture – loose furniture being from Vitra. Then there is the woodwool, the original lining to large parts of the roof soffit, once memorably described by Design Museum director Deyan Sudjic as ‘a material that has the same relationship to architecture as Spam has to cuisine’.  The woodwool had to stay for listed-building reasons. If you can’t beat ‘em, join ‘em, reasoned Pawson, who has accordingly introduced new woodwool ceiling slabs in many other areas, ranging from a pale colour to harmonise with the timber in galleries to a black version in the members’ room.

There is also a design library and large archive storage for the collection, which you can gaze down at through a glazed wall. There’s a studio for a designer-in-residence, a digital design studio – all the nice things for such a place to have which were conspicuously absent in the first incarnation of the Design Museum.

Finally, here and there throughout the building are tantalising reminders of the building’s past – such as period stained glass in one section plus historic photos (rather lost at one end of the shop), a restored world map of the Commonwealth, a section of original textured plasterwork behind a reception desk, those flagpoles outside. Visitors will be handed a leaflet explaining the building’s history. But really, having seen the place when it was functioning as the Commonwealth Institute with its tacky dispays, it was always all about the roof, Stirrat Johnson-Marshall’s ‘tent in the park’. It still is all about the roof, which is just as well since just about everything else has been replaced.

Luckily, though ‘bastard’ rather than pure, that roof has enormous visual strength.  Beneath it, the sequence of spaces is generous, on a properly civic scale. Will the crowds flock there? We shall see – and we’ll be reviewing the opening exhibitions separately – but if they do, they will be impressed.