Can Associated Architects’ School of Architecture and the Built Environment propel University of Wolverhampton – and its surroundings – to the higher plane it seeks? 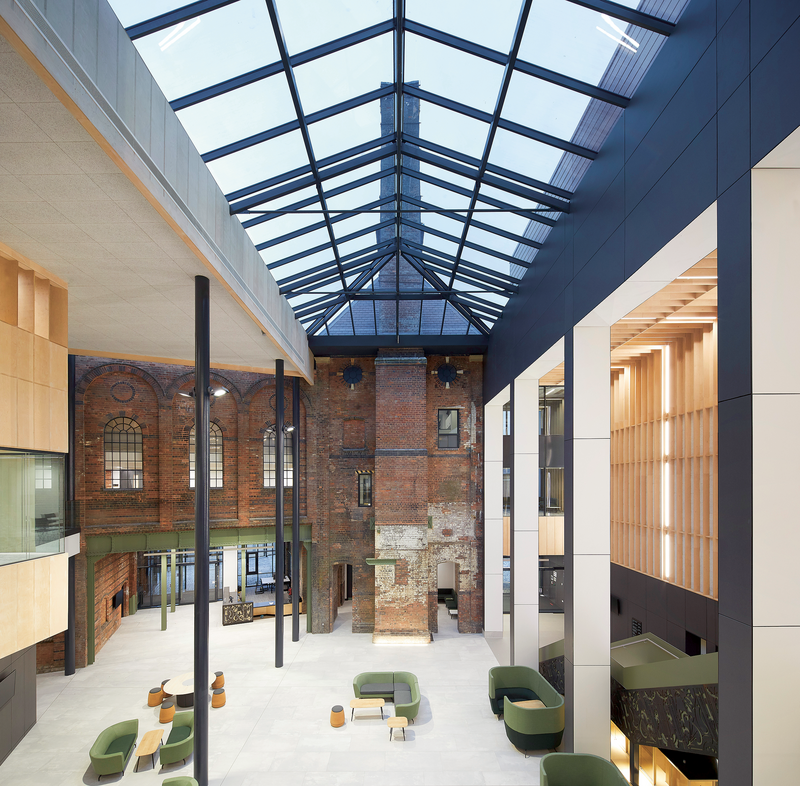 Looking across SoABE’s atrium to the south end of the brewery, its clock tower and chimney and the ‘heritage entrance’. Credit: Hufton+Crow

It was almost a century ago, but 1927 was a year of firsts for Wolverhampton. England’s first traffic lights were installed in Princes Square in the centre, their poles still painted perkily in original ‘Belisha beacon’ stripes. Later that year, the A4123 ‘New Road’, opened by Edward, Prince of Wales, connected Wolverhampton to Birmingham with the 20th century’s first intercity highway. And had Florida’s Daytona Beach not been a far more glam place to zoom past the chequered flag, perhaps English speed driver Henry Segrave might have sped along New Road in his city-built Sunbeam 1000HP, the supercar that helped propel him to a 200mph land speed record and become part of history.

Listening to Wolverhampton University vice chancellor Geoff Layer in the YouTube ribbon-cutting ceremony of its new £26 million School of Architecture and the Built Environment, you’d think the glory days were still around; but ‘firsts’ are well and truly consigned to the past, especially here. In both the Complete University and Guardian University Architecture course guides, the school ranks second from bottom, not helped by the fact that it’s still seeking ratification for its RIBA Part II course. But Layer’s genned up on classical rhetoric, saying how the 7,900m2 SoABE campus, on its brownfield site east of the centre, ‘puts the city as well as university on the map’, stressing that it ‘transforms not just lives but transforms communities, transforms business and transforms professional practice.’ That’s a triumvirate of superlatives; but there’s also a niggle, like the eventual pronunciation of the acronym, that actual performance still needs to be endorsed by a wider public outside of the organisation.

But it deserves full marks for effort thus far. The city’s Springfield brewery sits on a 5ha  site just to the north of the railway station on the east side of its raised viaduct. Opened in 1892, the large, red-brick complex was characterised chiefly on the east end by its ornate ironwork courtyard entrance and its clock tower, clearly visible above the level of the residential housing around (discounting the noughties high-rise slab of student living now muscling in between it and the station). Shut down in 1991, the Springfield brewery was bought by a residential developer and messed around with in an ungainly manner until the 2008 crash meant the site was abandoned again – to suffer further decay and then arson. It was only when the university saw the potential of expanding its campus eastwards past the ring road, via a charming industrial route over James Brindley’s Birmingham canal and under the viaduct, that things started looking up again. The initial £26 million development to create SoABE is just one quarter of the £100 million projected investment in the cleared site to create the built environment campus that Layer is so effusive about in his video.

Birmingham firm Associated Architects with Rodney Melville + Partners, with plenty of experience between them in academic and heritage sectors, were appointed by the university in 2017 to take what was left of the brewery and turn it into a state of the art built environment faculty to catalyse the regeneration of the area. Dealing with demolition, remediation, site contamination and Pleistocene glacial till geology, it’s testament to the will of all involved – not least proactive local planners – that you could stand in a fully operational campus building three years later with old clock tower, brewery chimney and ironwork gateway all returned resplendent.

These aside, for the most part it’s the spirit of the brewery that remains rather than the building itself. While the south side of the complex has been restored and the factory offices against the perimeter wall retained, the fermenting halls that would have faced the viaduct have been replaced by a new steel-framed workshop and teaching block, leaving just traces on a west wall. Likewise on the east wagon courtyard side, another new teaching block picks up on the old footprint of a fac­tory quadrangle – now a central atrium in the new complex. And running along the eastern edge of the site are lovely period stable blocks, the section to the north of the Springfield gateway forming part of Thomas Telford University Technical College and the southern half becoming the university’s Elite Centre for Manufacturing and Skills (ECMS). Paved in local granite with plaza seating rising out of the level changes, it’s a pleasing, open yet enclosed space; which one hopes will become an integral part of the campus’ social life – especially if those old brewery offices are turned into the union bar they are begging to be.

Associated Architects wasn’t only reconciling a new programme with an existing structure but was also keen to make a mark of its own, using a stated strategy of ‘complementing and contrasting’ on a project that, for funding reasons, needed to be turned around quickly. The firm was appointed in late 2017 and listed building consent received in April 2018, when enabling and demolition works began, and by October it was already building. Timing, it appears, drove the choice of steel structure, although there was also the overriding desire to make the new building a showcase for offsite construction. This resulted in large, precast concrete panels brazenly embossed with super-sized ironwork motifs of the gateway, and red, brown and gold Tecu metal cladding panels and red-painted vertical louvres in front of the glazed west facade. Other ideas that made it include the gestural industrial saw-tooth roof reference. 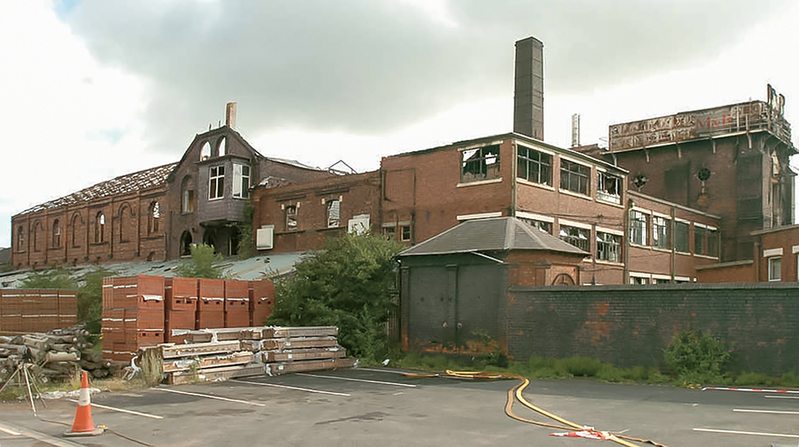 Though well-intentioned, these seem overwrought together, with lots of ideas jostling, a couple of which might have been re-evaluated had there been time to allow things to gestate and settle. Luckily, the new building is citadel-like, which allows it to be perceived at a distance from various angles, and the moves made at scale work. The east side’s jutting, angled Tecu gables create a statement entrance from the courtyard with an interesting assemblage of old and new elements to the south, and to the west, there’s impact through brute repetition. Overall, the composition seems to work approached from any side – and probably looks good from one of those passing trains.

Internally, it’s all about the atrium, sitting within a big doughnut of academic and workshop spaces, which acts as the focus of the new campus. Entered from either the ‘heritage entrance’ on the south side or from the wagon courtyard on the east, it rises through the full height of the building and gives imposing views of the brewery chimney. A grand stair with motif-etched solid steel balustrade, part of a west service spine, takes users up through departments of engineering, quantity surveying, planning, building control and building services, construction and facilities management; with the architecture BSc and future Diploma sat at the top in a ‘superstudio’ running the whole 56m length of the building’s west side.

Associated Architects has achieved a lot with a little, given the amount of co-ordination needed to marry the levels of existing structure with the new building and programme. And in places it’s fine stuff – notably at the south end. This is where admin and teaching spaces skew about existing steels and arched windows to yield double height sections tucked behind brick elevations – both surprising and pleasing. The profiled glass panelled upper teaching space by the clock tower has lovely light by day and acts as a campus beacon by night. Even the architects felt it necessary mark the specialness of this wing, choosing original brass Jacobsen door handles rather than the more modern, black-painted iterations it specified everywhere else.

But other specification choices are more curious. While I really enjoyed the atrium’s imposing birch plywood fin wall, which helps create spot-on acoustics for a sizeable space, the grey ceramic floor tiles are disappointing. I’d have preferred a polished concrete finish, or the cobbles from the wagon courtyard running in and through. This and the choice of cement board lining the atrium side walls of a good lecture hall and up the huge steel columns along the big staircase smack of decisions driven by cost and time. After all, the existing ones are all elegantly exposed, and you’re going to ask a student to ruminate daily on what a column wants to be, why not intumescently coat it and leave it there open to view?

In the modern blocks on the north, east and west, the architect was asked to create big teaching spaces around the atrium, and has duly done so. Dedicated workstation areas on the north side are augmented by even more ‘breakout’ workstation spaces on the east. Here too are the glazed seminar ‘boxes’ projecting into the atrium, which look dramatic outside and in but are distracting enough to leave me wondering what one learns in them exactly. And it’s at this point that I remind myself that I’m in a built environment faculty rather than an architecture school. Here, even the assigned architecture spaces in the saw-tooth roof feel more like pleasant offices than a studio, though huge rolling white partitions do apparently allow for more flexible future layouts as space is better occupied. But with workstations dotting every carpeted inch of breakout space and the model making area fetishised in a service spine glass box between teaching rooms and ground floor ‘heavy’ workshops on the west, study areas have the sense of being isolated from areas of actual making, which seems strange. Associated Architects director Richard Perry, whose own training involved the cut and thrust of getting models in and out of a paternoster lift in Sheffield, concedes the same unease with the interior’s corporate nature, but is optimistic that time will force a reappraisal of the spaces to bring those assigned breakout areas into more contingent and experimental use – perhaps sans carpet.

I hope he’s right. You can see the university’s – even the city’s – need for a ‘finished’ building to create critical mass on a large site where proposed similar treatment for the derelict Cooperage to the north – due for similar treatment – still feels a long way away. At £3,300/m2 the architects have delivered well here for the client but it feels like the product of construction is trumping the process and I’m not sure what message that communicates to its students. But I’m encouraged by Perry’s optimism and architecture course leader Andrew Cunningham’s take on how the course structure here is founded on challenging its students to engage critically with ‘live’ projects in the city – learning firmly based in the real world. They might start by disrupting the pre-determinacy of the very space they study in; a course of action which, not being a first for students per se, might be prerequisite to the school’s becoming so.