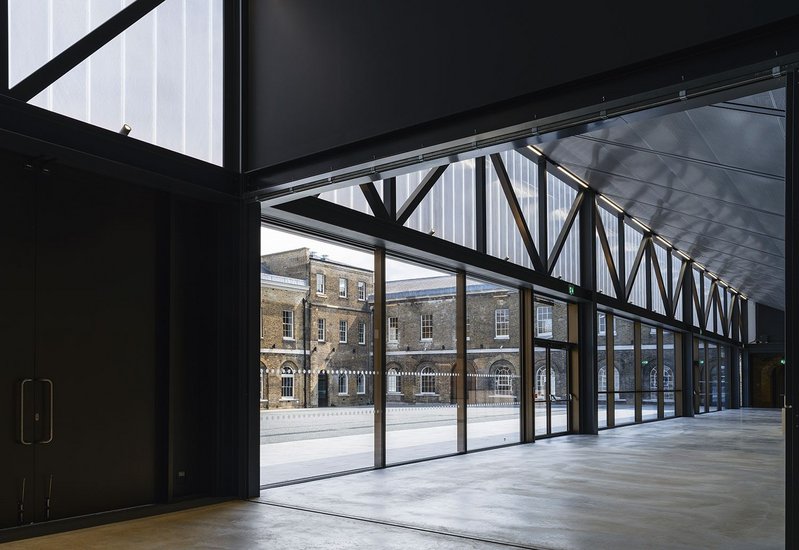 Industrial-sized get-in for the auditorium, crossing the western end of the lobby from the side of the courtyard. Credit: Timothy Soar

Woolwich: the place that was my introduction to full-time magazine journalism. Period: the first Elvis Costello and Kate Bush albums, Jim Callaghan prime minister. Today: surprise, there’s been some changes round there since then. All the usual ones – Marks and Sparks is now a Poundland, the two sumptuous neighbouring Deco cinemas (Odeon and Granada) are now competing evangelical churches – but also this. A new £40 million publicly-funded cultural quarter, Woolwich Works has arrived, in the formerly out-of-bounds Royal Arsenal weaponry complex, now otherwise a mid-to-high-rise residential quarter with a Crossrail station.

Woolwich was always a garrison town. The military had several big centres here and the 1,000 foot long Georgian Royal Artillery Barracks up the hill to the south is still operational. The Royal Military Academy further south (James Wyatt, 1805) is now a conversion-and-newbuild housing ­development.

Meanwhile the Arsenal down by the river to the north made all the munitions the artillery officers could wish for, from bullets and mortars to huge cannon and howitzers, even commemorative medals. This huge military-industrial complex dates back to the 17th century and just went on growing, peaking during World War I. The factories closed in 1967: the sprawling eastern part with firing ranges mostly became housing (including Thamesmead) while the western part with the historic buildings closest to Woolwich town centre stayed in military research and administrative use until final closure in 1994. While so-so riverside housing blocks began to appear here in the early 21st century, it was the planning of Crossrail that finally stimulated the more ambitious (if still generic) new mixed-use development we now find. 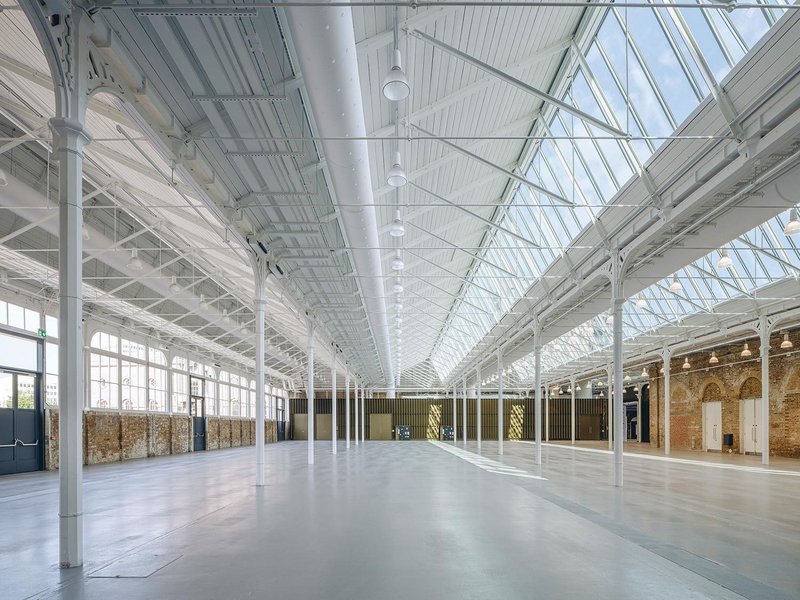 The delicate iron structure of the armaments factory has subtly introduced services and is very adaptable. Credit: Timothy Soar

Such decluttered former industrial sites can’t help but feel strange, and the 88 acres of Royal Arsenal Riverside as it is now known has plenty of this oddness to it, as if there’s more space than the developers really know what to do with or are allowed to touch. The highest density of housing blocks is above and around the Crossrail station box but elsewhere relatively diminutive preserved old buildings find themselves rubbing shoulders with blocks up to seven storeys. The ‘Firepower’ Royal Artillery Museum that opened here in 2001 – too soon, perhaps – never attracted many visitors and moved out to Wiltshire in 2016. So there was a cultural hole in the complex, one that has now been filled with Bennetts Associates’ cultural masterplan for a cluster of five existing listed buildings either side of the broad avenue (Number One Street, to give it its prosaic military title) leading to the Thames Path, riverboat pier and its attendant circle of Antony Gormley cast-iron figures.

The centrepiece of Woolwich Works is Building 41 (military numbering again) on the west side of the street. This contains a large adaptable performance space for music, theatre, comedy and the like, plus exhibition galleries, dance studios, rehearsal rooms, events space and offices. Bennetts (in what was the last project directly supervised by founding partner Rab Bennetts, with associate Matthew Curtis) has completely transformed this with a new, broad, north-lit lobby added to the frontage of this iron-framed building. It links right across from east to west wings, big enough to act as lobby with bar for the auditorium as well as improving circulation. From the exterior (an austere courtyard for outdoor events) its cast-glass clerestory looks as if it is going to smash into the pediments of the flanking buildings. It stops a few feet short on both sides.

Building 40, slightly removed to the south, is the grade II* listed 1717 Board Room building, bricky Vanbrughian in feel though the architect is unknown. Double-height room on one side, with a 20th century inserted floor on the other and with a big rear wing, this is now dance studios and support space, again converted by Bennetts. Finally, three more buildings in its masterplan on the eastern side of the street (17, 18 and 19) have been repaired with minimal intervention – there the Punchdrunk immersive-theatre company is trying them out for size and working with Haworth Tompkins on its fit-out. The indifferent centre building of the range was the turn-of-the-century Firepower ­museum, slated for replacement in the Bennetts ­masterplan.

I visited Woolwich Works on an intermittently wet and windy Wednesday afternoon. Three somewhat Romanesque arches in solid profiled aluminium mark the entrance. The place is hardly buzzing – too early for performances. But enough people are based in the main building to provide a steady stream of customers for the café. The Chineke! multi­cultural orchestra, a big hit at this year’s Proms, is based here as is the National Youth Jazz Orchestra and the Protein dance company. With Punchdrunk here too, and a director who used to run Camden’s equally eclectic Roundhouse, this ought to provide the necessary critical mass – especially once Crossrail (the Elizabeth Line) opens which is surely soon. Crucially, the Lizzie Line station is on the north side of the main road that divides the town of Woolwich from the former Arsenal, so handily close to the venue.

Bennetts’ approach is light-touch. Building 41 was not in especially bad shape but needed its zig-zag roofs insulating above the white-painted timber soffits – as much to contain sound as for thermal efficiency. Acoustically it’s pretty good. Services are run along the structural grid and in floor trenches. Masonry walls with all their patching are kept largely as they were. Stairs and lifts are inserted to the upper levels of the wings.

The photos here show the spaces empty but I found the auditorium configured with raked bleacher seating arranged in a U around a stage set up for amplified music, café and bar fully equipped, dancers rehearsing upstairs. Across the street, fit-out continues in Punchdrunk’s domain. It feels intelligently planned, a real arts working and performing environment. The place needs this kind of focus. And with ever more housing blocks rising on the brownfield sites west of here, there’s a growing population to draw on – assuming these new arrivals can be persuaded to stay local, rather than just taking Crossrail to the West End. 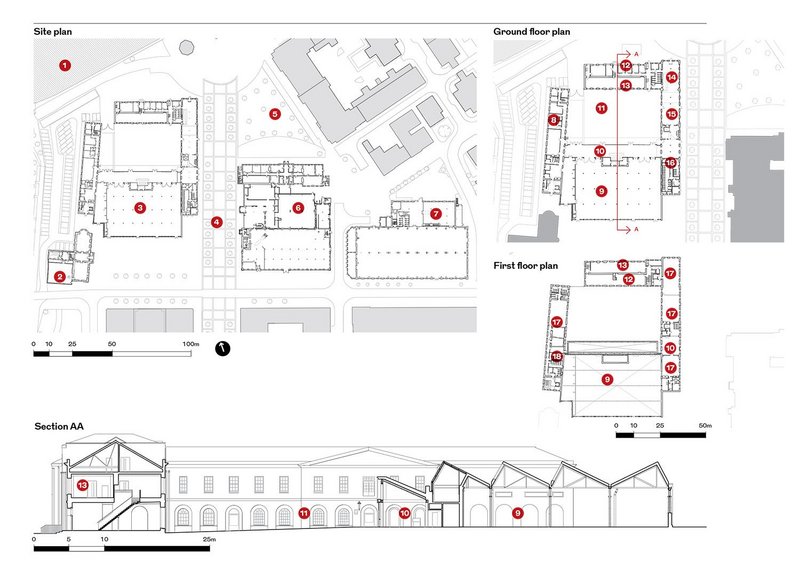 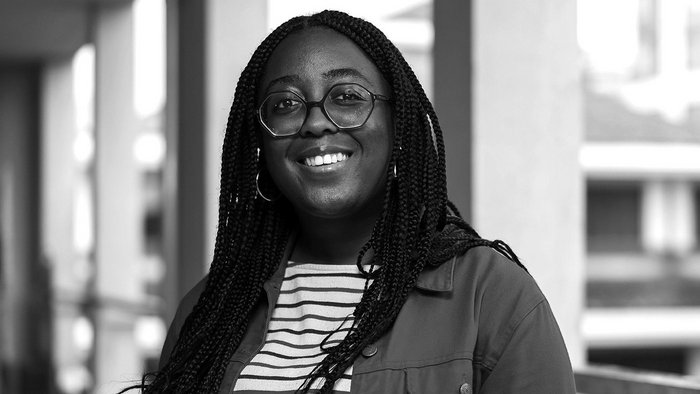 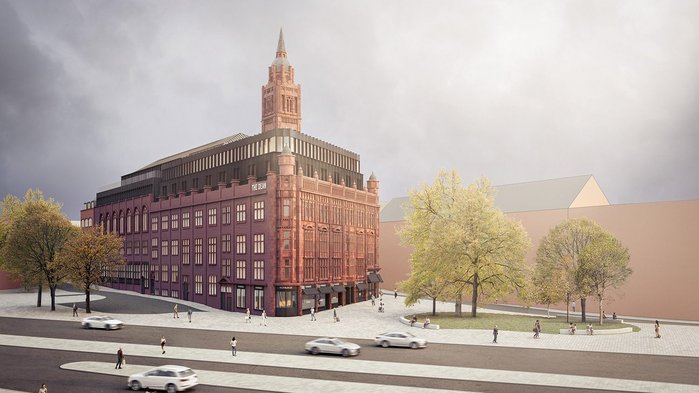