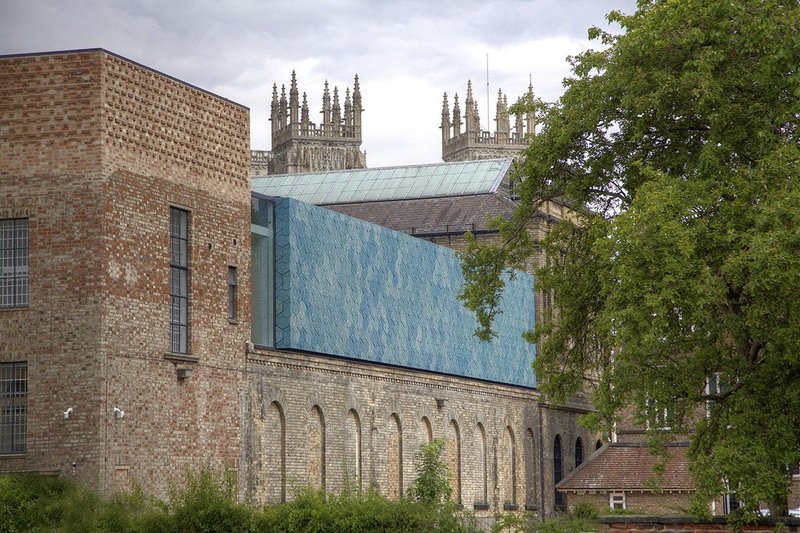 Facing the ruins of Museum Gardens with York Minster beyond, the ceramic wall is the outward sign of the reworking. Credit: Peter Heaton

Tucked into the top floor of York Art Gallery is a living room, of the sort you may recognise from Kettle's Yard, Cambridge or Ernö Goldfinger's house in Hampstead, north London.

It is here that the gallery's new specialism, ceramics, is explored most persuasively as part of the Centre for Ceramic Art. Pieces by Ian Godfrey and Ewen Henderson sit alongside pebbles and driftwood, flatware slabs curl against soft panels of colour.

It is part of an £8m development and extension of the gallery by Ushida Findlay Simpson Brown. It was the last project Kathryn Findlay was involved in, it being finished after her untimely death by her colleague and the joint venture partnership between the two practices. The bold gestural designs that marked out her work are visible in the early designs with a grand ramp curving down into the gardens behind the museum, but few survived through to final design.

The substance of the architecture is in reworking the central spaces. The head of York Museums Trust, Dr Janet Barnes, tells of how she used to take people up to the top of the boxy galleries and peer through into the barrel vault beyond. The work has opened this up to give an airy first floor gallery and borrowed some of the space at the ground floor entrance.

Like Manchester’s Whitworth or the Whitechapel Gallery, the grade II* listed Victorian building offered familiar problems beyond the hiding of its best features, access, creating museum conditions to enable loans from elsewhere, or how to generate the revenue to survive. Neither the expanded café area alongside the entrance nor the tiny shop should detract from the major innovation of re-imposing an entrance fee, which provoked a much debate when the gallery reopened over the summer.

From the entrance, I wouldn't be tempted to part with my £6.81. The Victorian arcade is a closed cluster of columns and rather unwelcoming, despite fronting on to a pleasant square. Inside, the new architecture reads as lines of glazed intervention which are handled without the grace of its Victorian host; a deep plasterboard layer confronts you at the edge of the mezzanine. This houses the services that ensure the lower level runs to museum conditions, but it is a clumsy imposition nonetheless. Those approaching from the west through the adjacent gardens – as is planned in the long term – will face a long climb up a chunky glorified escape stair.

This staircase is the greatest lost opportunity – not just because it could have been sculpturally interesting but because it has such a dissatisfying relationship with both inside and out. Not only does it sit above an art store at ground floor level, but its entrance is barely acknowledged in the galleries. It is effectively a back door and has a narrow entrance that seems unlikely to work for even the schools which will have to be funnelled through the shop into the education centre beyond; it certainly doesn’t seem to have been built for a Sunday crowd of visitors wanting to wander in and out to the oversized balcony deck. Despite the fun of making an elevated viewing platform, this causes more problems than it solves without really opening up the gardens at the back.

But in terms of exhibits and capitalising on a strong ceramics collection York Art gallery does stand out – particularly that living room. 'I wanted to show people how they could live with ceramics,' says collector Anthony Shaw. I had imagined the space modelled by Leslie Martin or one of those other 60s masters of internal space. But in fact it is designed by ceramicist and ex-RCA head of ceramics Martin Smith: it is based on Shaw's parents' home – where his obsession began, and which he finally sold for the collection which is now on long loan to the gallery.

Large vitrines display the works of individual potters and a wonderful, seemingly perilous stack of 10,000 bowls by artist Clare Twomey and many citizens of York over various workshops. One wall is devoted to showing the colours from the earthiness of Bernard Leach through to bright, highly glazed tones. On the other side of this wall, facing the Museum Gardens and the trust’s Yorkshire Museum, are a small manifestation of this new gallery identity: conjoined hexagons of blue-green ceramic panels that refer back to York streets where these were used on the gutters and in some cases for paving.

So if you are interested in sculptural form York Art Gallery is the place to visit, just don't expect to find it in the architecture.