Phelan Architects’ efforts to balance history and modernity for the transformation of the pre-parade ring and grandstand are more disjointed than seamless, despite its charm 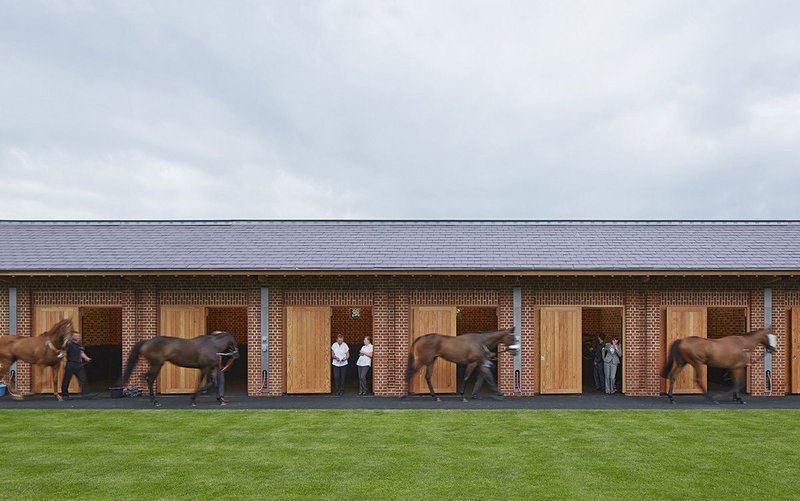 Until 1754, racecourse architecture in the modern world did not exist. The races themselves had already established long lineages at particular locations – Chester Racecourse, for example, had run on the same site since 1539. But their architecture was ad hoc and chaotic; spectators on horseback and in private carriages vied for stopping space bet­ween timber huts and temporary shelters. Without ticketing or entry fees, the scramble had become too distasteful for polite Georgian society. So in 1753 York Racecourse took the unprecedented decision to commission a young local architect named John Carr to design a structure that would elevate spectators, and unknowingly set the format for racecourse architecture ever since. His invention was the grandstand. Its importance was not only in establishing a new category of building, but in creating a spatial programme for race men – owners, trainers, jockeys – and goers. Suddenly spectators started to be accommodated according to sex and class; entry fees were charged, and the races acquired a certain finesse. Racing became a commercial enterprise.

Today, all that survives of Carr’s two-storey, seven-bay Palladian-style design is the ground floor, but the social norms and associations started by him remain deep-rooted. New buildings alongside this grade II*-listed veteran would have to incorporate heritage and history in their architecture, alongside signs that they are progressive and modern too. It is a difficult balance to strike. And for its recently completed transformation of the northern section of York Racecourse, Phelan Architects found it meant certain aspects were non-negotiable: patterned carpets, elaborate iron fretwork, barber-pole columns and slate roofs. The resulting redevelopment is a delicate modern interpretation of a domestic vernacular struggling to incorporate the ceremony of horse racing and its commercialisation. Blowsy Yorkshire Rose-printed carpets can unduly shape the lasting memory of a building.

Nevertheless, York Racecourse has been an important and complex project for Phelan Architects. Director Brendan Phelan was commissioned in 2012 after working with the racecourse on a masterplan while he was at EPR Architects and the £10m project is the first comprehensive redevelopment of the northern end since 1908. To fit around the racing calendar of May to October, it was planned in two stages: the pre-parade ring, saddling boxes and weigh-in building; and the champagne lawns. The first completed in May 2014 and the second in May of this year.

The brief was to transform and improve the northern section of the racecourse around the parade ring for horses, race men and spectators – in that order – as well as TV crews, stewards and judges. The masterplan sought to separate these strands to improve equine and public safety, to avoid paths crossing and to limit distractions for the horses.

The first stage of the project to the west of the site separates horses into their own quarters at the arrival point from the stables, which at York are, unusually, on the other side of the track. Horses are prepared in this section, warmed up in the pre-parade ring and then shown off in the parade ring for 15 minutes before their race. From the rubber covered walls to prevent cuts and bruises to the saddling box doors for additional calming, the plan is designed to give horses the best chance of success – thereby helping York to attract the world’s best racers. Drawing on the materials of existing buildings with a palette of handmade brick, timber and slate, a two-sided, one-storey stable yard is arranged around a larger, flatter pre-parade ring. Open on one side to the parade ring and its small-scale stands for public viewing, and enclosed on the final side by a new two-storey weigh-in building, the design provides a quiet environment, protecting horses from the bustle of the champagne lawns, bars, retail and betting facilities beyond and allowing visual connections for the jockeys preparing in the changing rooms within. Enhanced equine facilities include an enlarged veterinary space, an improved, separate post-race wash-down zone and a private trainers’ room for making calls and checks.

The project has been developed in two stages around the parade ring in the foreground, phase 1 (left) and phase 2 (right) . Credit: Dennis Gilbert

Meanwhile, the second phase seeks to enhance the visitor experience. Unlike many spectator sports, racing does not limit spectators to a ticketed seat. Race goers wander around from pre-parade ring, to parade ring, betting window, bar and grandstand. Here Phelan has again used the red brick boundary wall as the basis of his design, but extruded it both volumetrically and stylistically with sandstone elements along the whole of the northern end wall. The new spaces accommodate a retail arcade and visitor facilities, including a raised lawn for viewing, rooftop bar and 70 toilets. At one end the scheme meets the jockeys’ gate, while at the other it abuts the remains of the 1754 John Carr grandstand from which this phase takes some of its architectural cues. Yet efforts to create architectural continuity serve more to diminish its importance on the site than to accentuate it. This problem is then exacerbated by a new, heavily engineered ETFE roof, which obscures the whole ensemble.

The project is defined by its two distinct parts – so much so that it is surprising to think they were designed at the same time, by the same architect. The first phase is humble, discreet and classic, while the second is overwhelmingly commercial in the manner of an out-of-town shopping centre, with fixed external tables on the newly raised lawn, totes and ‘parking spaces’ for ice cream or drinks carts. Yet both carry the hallmark of Phelan’s earlier Hopkins experience in the brick and timber humanism of the pre-parade ground phase and high-tech pairing of steel and stretched fabric of the champagne lawn.

True in a way to function, the split comes to a head in the design of the new weigh-in building that sits between these two phases. It is the axis which mediates these two distinct approaches to the architecture – race men and staff occupy the ground floor while spectators dine above. And its oppositions are visible on the surface. On the one hand the structure takes the clean lines, simple materiality, slate and deep overhangs of the pre-parade ring. On the other the first floor is dressed up in the language of the champagne lawns, with white planting boxes, blue and white barber poles and decorative rose fretwork, as well as interior patterned carpets, tablecloths and conference tables and chairs.

Yet, in its separate parts, the project does provide strong solutions to the problems faced at York, and possibly in racecourse architecture as a whole since Carr created the grandstand: the need to deal with the serious and costly business of horse racing and the prestige associated with horses, while also providing a commercialised space of entertainment for polite (and sometimes disorderly) society. Whereas European racecourse design in the 19th century developed into  set-piece ensembles made up of a number of buildings conceived as a harmonious entity, Phelan’s redevelopment at York spells a return to the slightly improvised, which has an older kind of charm.