Steven Holl Architects has produced the antithesis of Mackintosh’s Glasgow School of Art in its Reid Building addition, though it has sprung from a close reading of the original 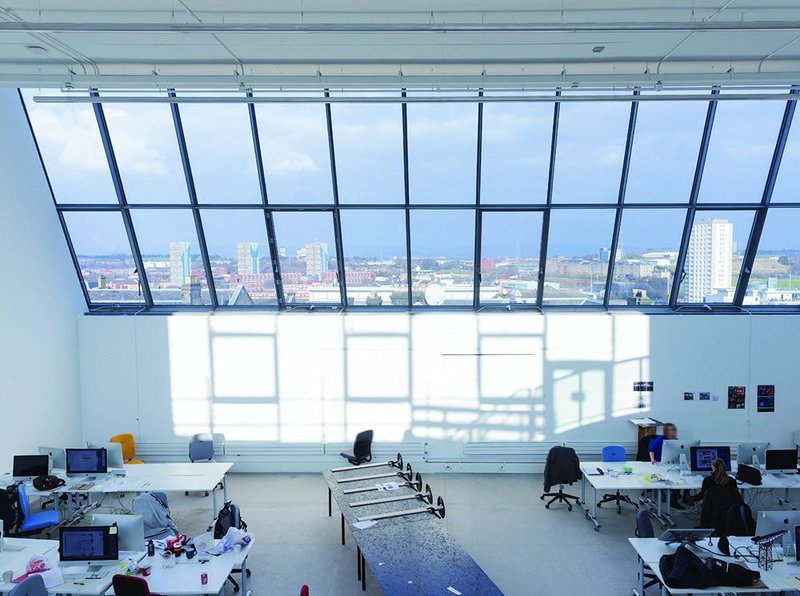 North light and south light, captured from the mezzanine of one of the sixth floor studio spaces. The height of the building on top of a drumlin means it teeters on the edge of the city centre with amazing views out north.

‘The craft and detail of Mackintosh’s building was not available to us, but he couldn’t have had these steel formed concrete cylinders driving through the building’

Radically glassy and bright in the deeply, richly dour stone streets, the new Reid Building for the Glasgow School of Art looks a little uncomfortable. The large cladding panels and scale look even less convincing against the delicacy, craft and leaded lights of Charles Rennie Mackintosh’s original A listed School. But Chris McVoy, the partner at Steven Holl Architects who worked most closely on the project, says it was access to the craft and technology of construction that set the parameters for two very different buildings. ‘The craft and detail of Mackintosh’s building was not available to us,’ he says. ‘But he couldn’t have had these steel formed concrete cylinders driving through the building, or the large panes of glass that modern technology enabled.’ 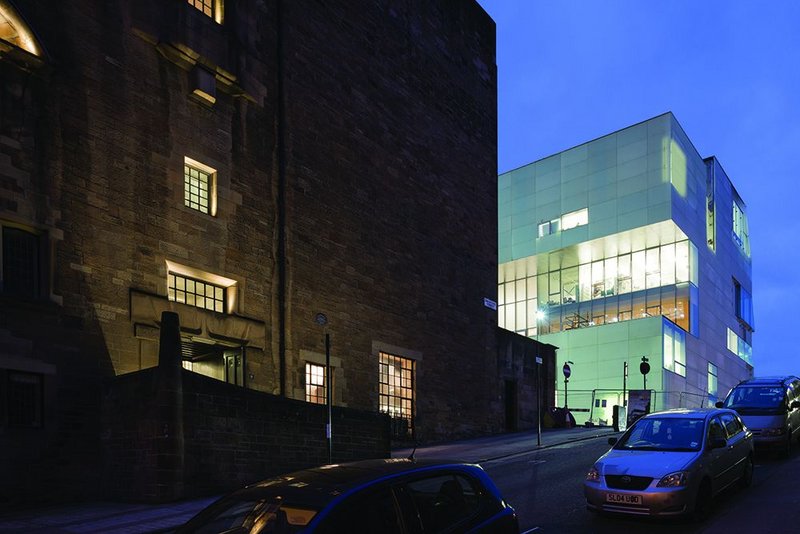 The bright facade of the Reid Building may look like an interloper by day but at night it glows, a lantern perched uphill of Mackintosh’s Glasgow School of Art.

And glass is what the new building’s exterior is all about. But the huge amount of work and waste that has gone into designing the layers of glass to disguise the bolts that hold the glazing in place (so the fixings just become a ghost on the facade) suggests that modern day technology might not be all it’s cracked up to be – an enormous number of panels are now being replaced as cracks radiate out from those very bolt heads on anything less than perfectly flat glass. 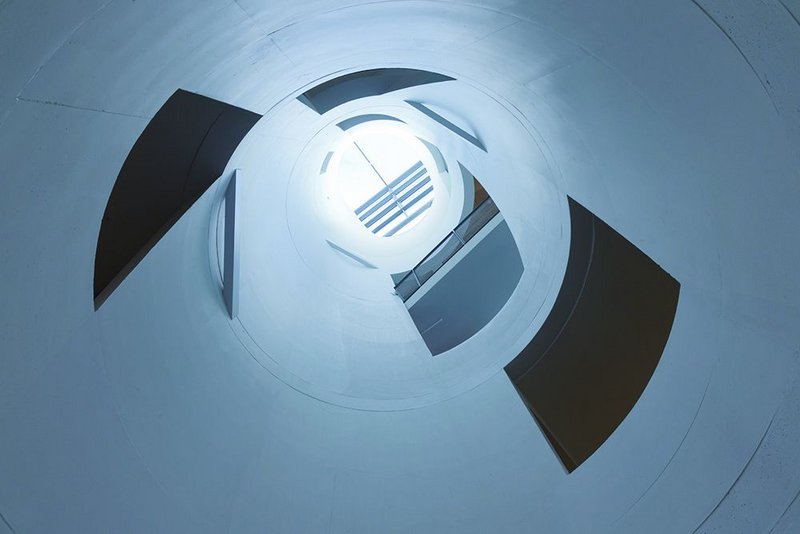 Yet the technology of our time argument is more convincing than other explanations for the rationale behind the facade. Take, for example, deference to views from the original studios – the second floor steps in to accommodate a planted terrace, but this massing is lumpen. The bead blasted glass is justified to reduce the reflection of south light into Mackintosh’s seminal north light studios, but is a distraction. Retention of the 1909 student union as a masonry corner hints at a good idea, but the glass oversails and masks it at lower levels to a surprising degree. A little weight and masonry might have made all the difference but the practice likes thick bones and thin skin, in opposition to the thick skin and thin bones of the Mackintosh Building. Other strategies and other architects could have designed a facade far more in tune with its surroundings. 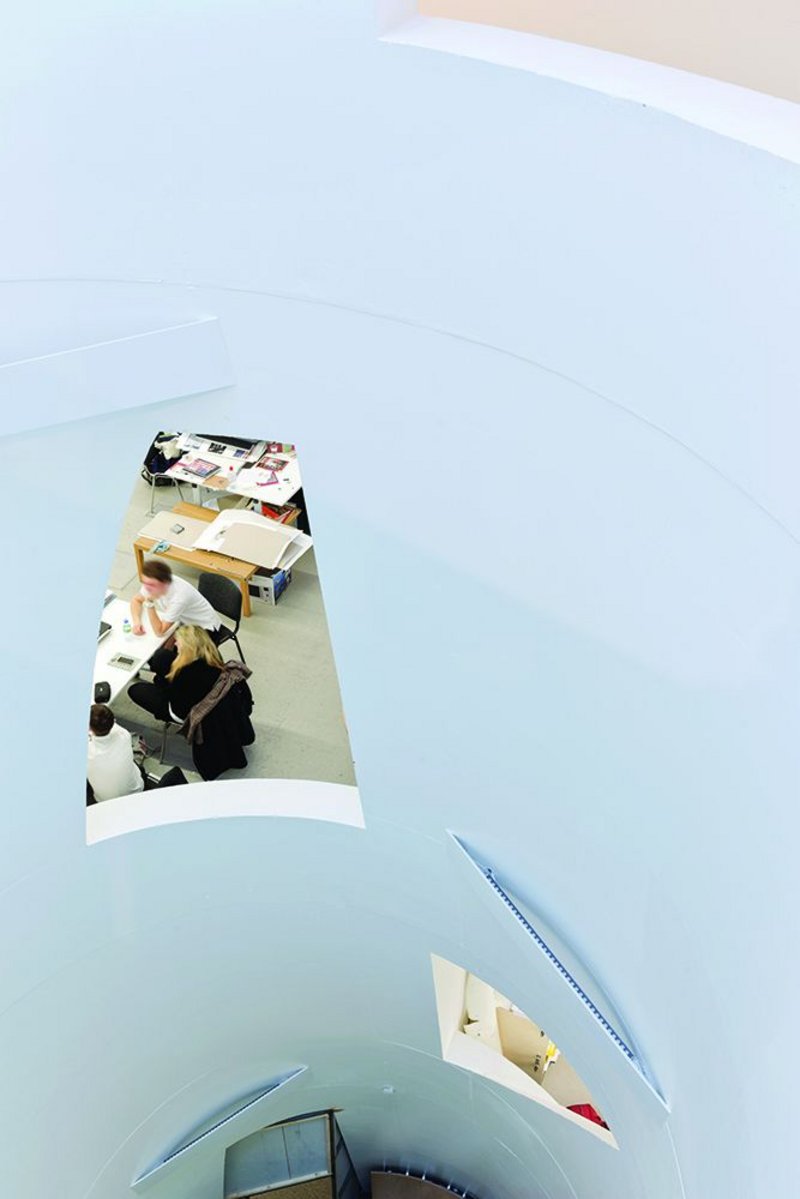 Cut outs in the driven voids link studios and staircase. As dark falls the tubes are uplit.

It is worth remembering, though, that the design which won the job for Holl and Glasgow-based JM Architects was about the space inside the building, more particularly its light. Its starting point was an analysis of how Mackintosh brought light into the School of Art. Lots of ways was the answer: rooflights, clerestories, north and south light, and pulling it into little spaces to almost create a volume of light. Thus Stephen Holl Architects resolved to create a ‘new language of light’. The tall oriel windows of the western facade were particularly significant to the practice: someone described them as ‘driven voids of light’, and Holls seized on the idea and translated it into another form. Add in the opportunity for serendipitous creative collaboration that all schools of art strive for, another tag line – ‘circuit of connection’, and the diagram of the new building emerges. In section, there are two blocks of studios, one each side of the centre in which three enormous light tubes, ‘driven voids’, are occasionally intersected by the ‘slow stair’. This maunders up through the building at 19 degrees – the ‘circuit of connection’ (forthwith to be known as the central staircase). 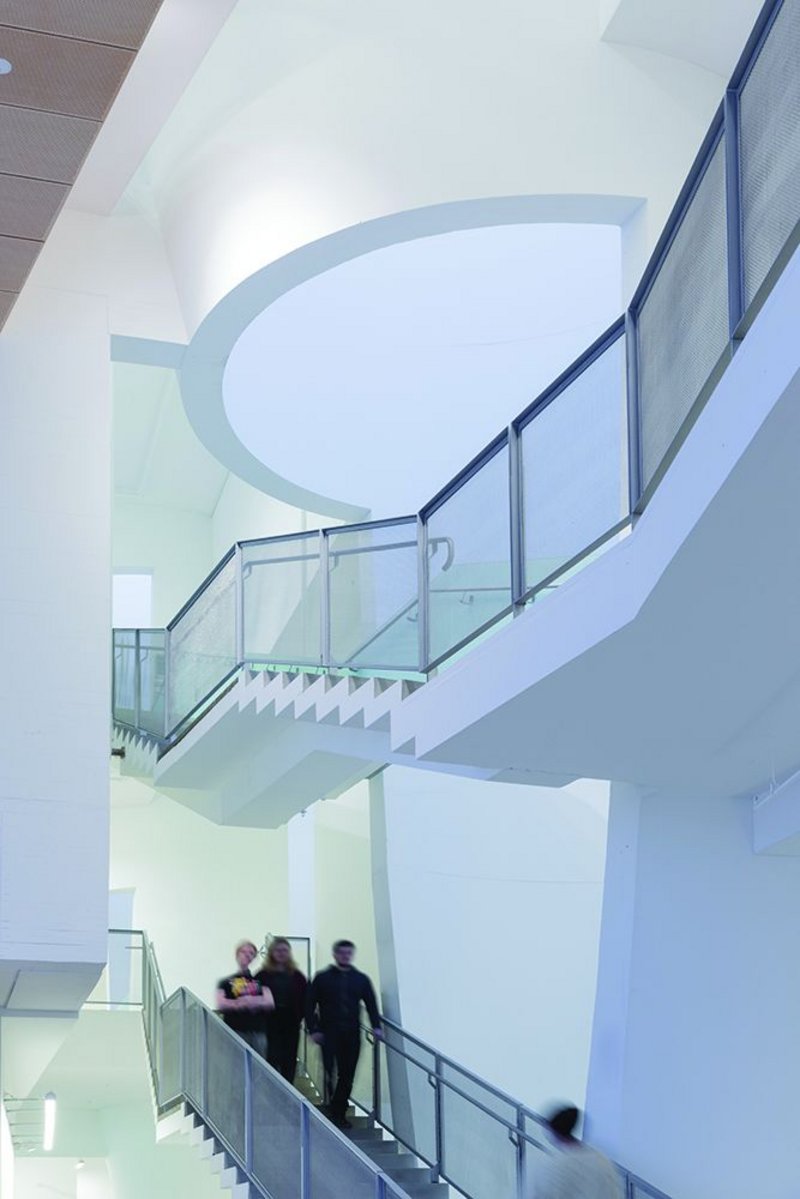 The complex of voids and suspended staircases create a social dynamic in the centre of the plan – sometimes awkward but always interesting.

While the number of architectural concepts in quote marks grates, these ideas drive a very interesting and varied interior. It is not unpredictable, that would suggest too much drama, but each floor gives a fresh view, into and through the building, up the driven voids, over the wide concrete balustrade cum beam onto studios from the mezzanine. Much of that is down to the disruptive interplay with the three light tubes. These run from top to bottom of the building, sliced at the top to bring in even more light from the south. Cast in situ in spiralling formwork, they are a vital part of the concrete frame. After the raking tubes return to centre the load with an elbow kink at basement level, the voids go on to act as water tanks below. Of course they are also solar stacks. 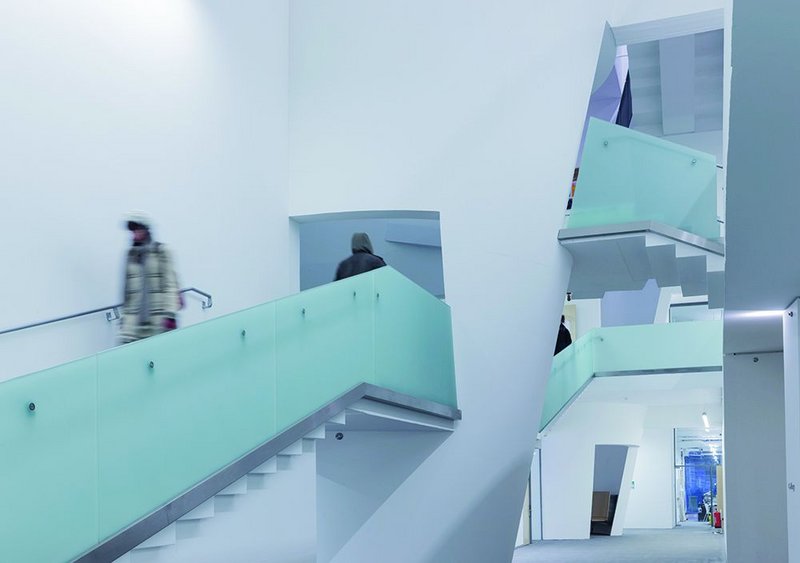 Three types of balustrade stalk the building: mesh, delicately boarded concrete and, shown here, the bead-blasted glass as used on the facade.

It is as if some art school student has taken a pair of sharp scissors to these tubes and snipped out ad hoc openings, sometimes through the studios, sometimes to let the stair push on through the tubes, balustrade projecting into the void. At the base of one the cut opens up a circle where perimeter benches offer intimacy of enclosure and the spirit of a chapel as the light draws the eye up. There is no one-line ‘ta da’ of an atrium but variety and modulation. Mannered too? Perhaps, but it’s worth it. 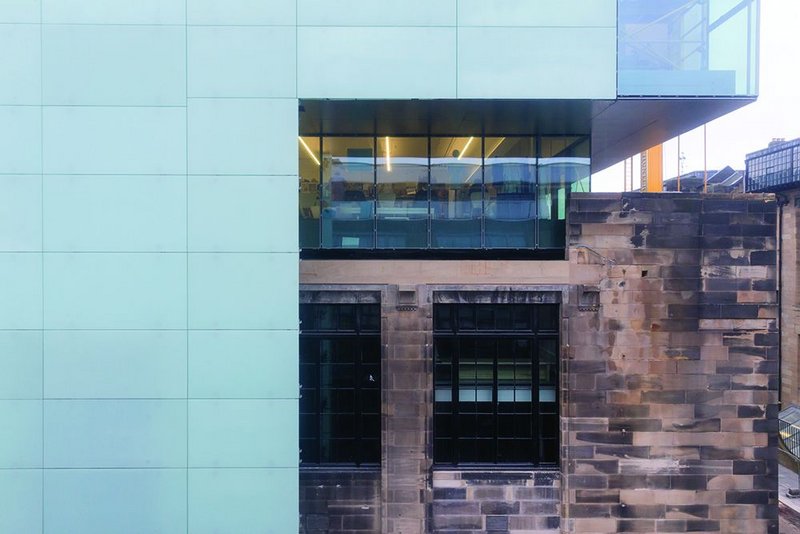 Embracing or obscuring? The oversailing Reid Building on top of the retained student union. Top right is the miniscule amphitheatre, hanging (cantilevered) over the street.

Even forgetting the voids there is a sense that design thought has really gone into each floor with enclosures, framed and veiled views changing from level to level, north windows angled out to capture the Glasgow light, the top layer with a glass shelf to ensure the lower layer doesn’t miss on any lumens.  On the top floor studios at either end of the building the levels are chopped up with a satisfying richness that seems to owe nothing to logic when you experience them, yet makes sense when analysed. So a floor of jewellery benches drops down into a tiny amphitheatre suspended vertiginously above Scott Street, a night lantern. Up a half storey the studio feels like a different space. Further on you climb through smaller studios and down, as if you were in the servants’ floor and attic of a forgotten baronial pile – but with better light.

The least remarkable spaces are those which are most public; the art gallery and a new base for architectural pilgrims to the Mackintosh Building to find out more about it, or just come in to stare across the street at the building from a distance, in the dry. Big picture windows mean the historic building opposite can be encompassed in one view, from the right position. Extra wide doors, a Holl trademark, give the sense of opening up the space. It is unclear, as yet, whether the Mackintosh visitors will get to appreciate the little ‘chapel to the void’ where they could gather round to appreciate a very different, modern architectural achievement. 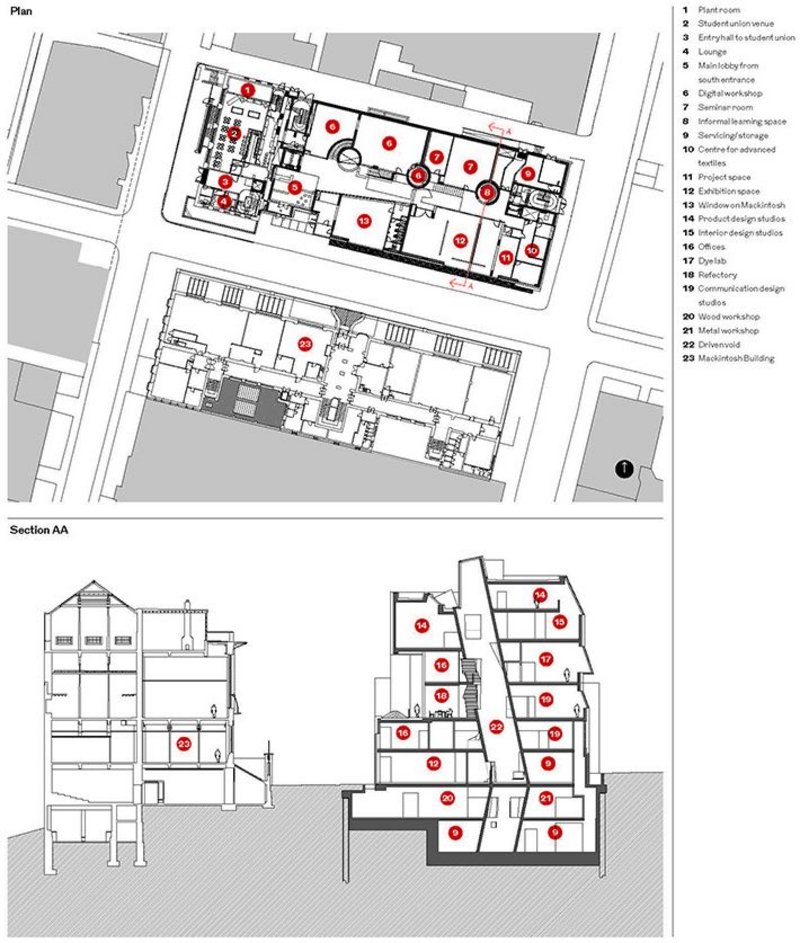 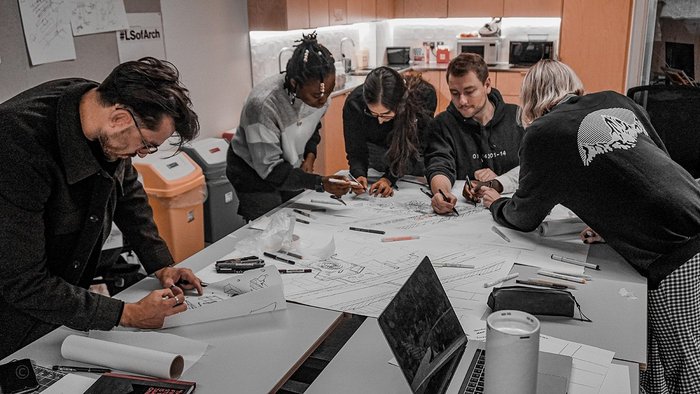