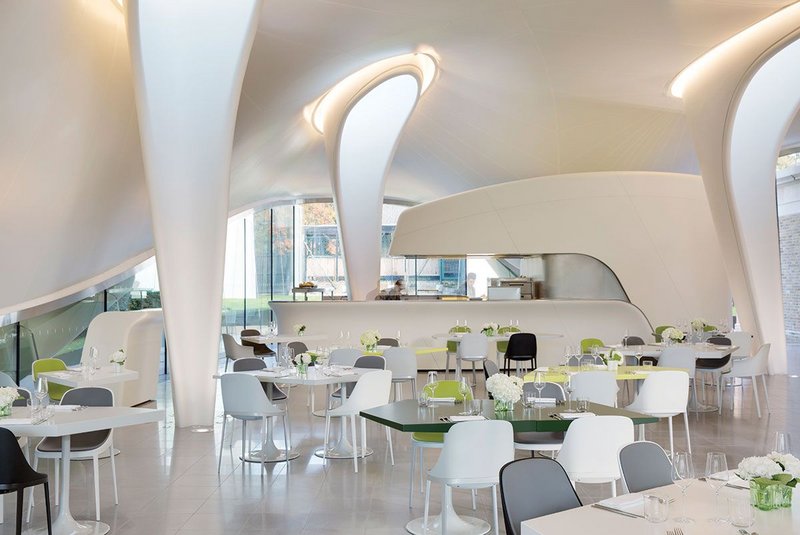 External and electric light beautifully pared at the top of the steel columns and light scoops. Credit: Ed Reeve

When the Serpentine Gallery in London’s Hyde Park began its programme of temporary summer pavilions it turned to Zaha Hadid (1950-2016), then an advisor and trustee. She had already made her mark on the imagination of many architects with her remarkable, intense, energetic paintings. So the 2000 Pavilion was something of a let down, the angles and folds recognisable but the tensile fabric rather flimsy compared with her vigorous art works.

It did however arrive at the moment Hadid’s built career was starting to take off and signal the start of Hadid’s long-awaited realisation of her visions. With it she cemented her avant-garde credentials. When two years later she completed the Bergisel ski jump – a form that perfectly suited her lines – she seemed to have found her place with dramatic gestural designs. And her practice was already working on the complex programmes of industry and culture that saw her threading car assembly lines through the corporate heart of the BMW Central Building in Leipzig and the impossible-looking melding of floor and wall at the Rosenthal Center for Contemporary Art in Cincinnati.

Hadid continued as Serpentine trustee through the years as the pavilion programme become more ambitious, with international names including her one-time tutor Rem Koolhaas, Oscar Neimeyer and Toyo Ito. She stepped in when Olafur Eliasson and Snøhetta’s pavilion was running late and designed a cluster of toadstools with the curving, singular surfaces that her work was evolving towards. 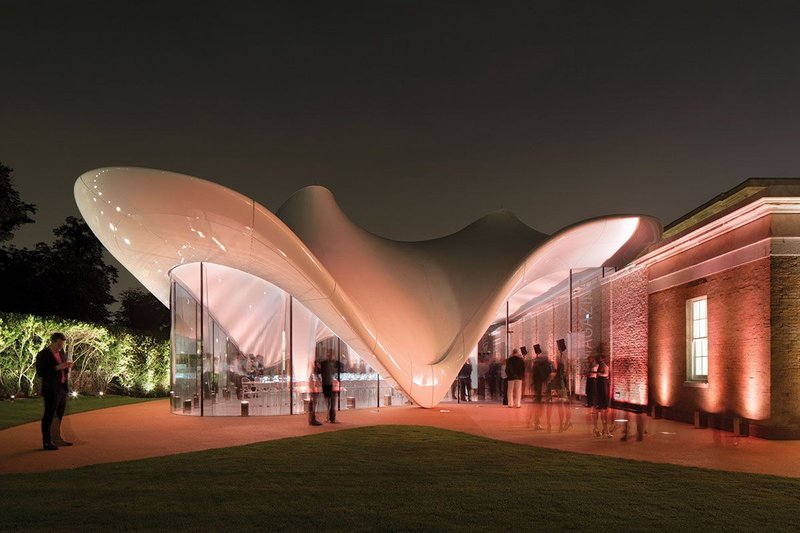 The winged curves of on the new restaurant bring the historic magazine structure into the interior space. Credit: Luke Hayes

Then came the chance for the Serpentine to expand. And not just into a summer pavilion. Down the road was a long-neglected 1805 magazine store, built under threat of Napoleonic invasion to ensure supplies of munitions for defending the capital. On the outside its Palladian portico barely acknowledged its function, though the depth of the brick walls hinted at it. This became a new Serpentine Sackler Gallery, its enclosed courtyards and walls lending an intensity to the art, including a show of Hadid’s own paintings after her sudden death in 2016.

The delicately restored magazine lends weight to the swooping tensile fabric of the restaurant alongside. Critic Ellis Woodman, writing in the Telegraph, called the new addition ‘aggressive and banal’ when it opened in 2013. But the shaved, sculptural, steel columns that draw in light from above add ethereality to the space (despite a certain awkwardness as they are negotiated by waiters and diners) and there is pleasure in the way the roof goes from high to low, framing the green around it and the historic magazine building itself. It was also an experiment, a test bed for Zaha Hadid Architects’ investigations into curvilinear structural surfaces.

It was a relatively small building by this stage in Hadid’s career. But the symbiotic relationship with the Serpentine could not be denied. Serpentine director Julia Peyton-Jones described Hadid’s loyalty. ‘Zaha has always been generous, and we are lucky at the Serpentine to be on the receiving end of that generosity. The architects and artists who work with us are paid only a stipend based on the visual-arts economy, not the architect’s economy. In other words, she wasn’t paid as much as she usually is.’ Other Hadid buildings are more famous and feted but the Serpentine shows another side to this first solo woman Royal Gold Medallist.