At last, Oxbridge has a building by Zaha Hadid Architects, and this one is an exquisite little gem 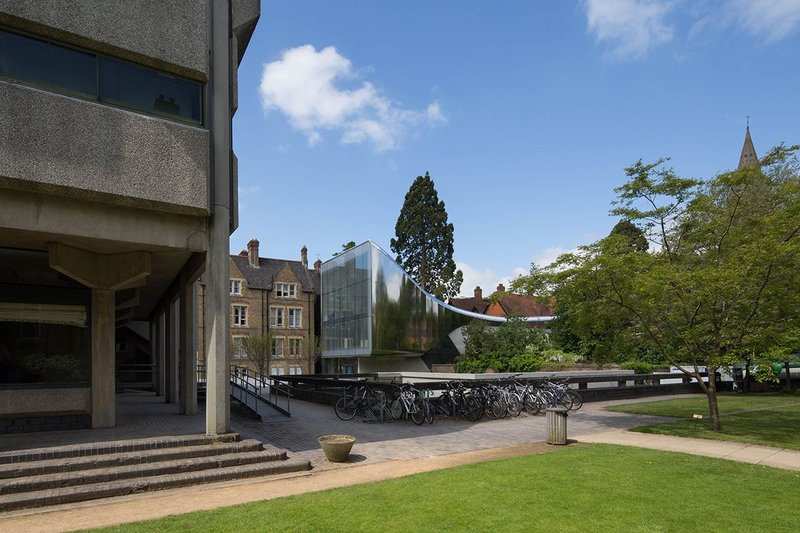 It had to happen sooner or later. Zaha had to build for Oxbridge, the only question being where, and on what scale. The college that eventually commissioned her is one of the newer, lesser-known graduate ones – St Antony’s College in north Oxford, founded in 1957. It has consciously put itself on the map with this expansion of the University’s well-regarded Middle East Centre which it hosts. The Investcorp Building, named after the company that paid the necessary £11m, is not big. It is certainly jewel-like. So, to quote Lord Hervey’s famous dig at Burlington and Kent’s Chiswick House, is it ‘Too small to live in, and too big to hang to a watch’?

I think Burlington had the last laugh there, and so I think will Zaha and her team, led by project director Jim Heverin. This is a lovely little building. Of course, there are various niggles one could make. It’s a tight fit in the available space, very tight. Perhaps the upstairs library is a little awkwardly-planned because of the way the building swoops round a large mature tree at the front. For sure the flared trumpet-mouth of the glazed end facing the private world of the college complex shows bravura in action, facing due south and so needing very careful specification to reduce solar gain into the archive reading room it marks. And certainly, seen from the road outside, this externally mysterious silver form visually links two existing buildings while turning out not to connect through to either, it being a stand-alone facility. One could make hay with such criticisms, about function following form, about gesture architecture.

But that old argument will never end, and here I really don’t care. The uses – library, lecture theatre, reading room, archive storage, administration – are relatively straightforward, the bread and butter functions of any seat of learning. The expression of those uses here is about something else: high status and visibility, not just for the college but for the university as a whole, given the international reputation of its Middle East Centre. And this is just one of the most beautifully-crafted buildings I have encountered for a long time. You have to regard it as a collector’s item.

That is important because architecture of this nature, and on this intimate scale, has to be detailed to perfection. Given that nothing is ever perfect, the usual construction glitches are here kept to an absolute minimum, and those are confined to the odd corner of the interior. Bearing in mind that when I saw this building it was still not stocked or occupied – that happens over the summer break for the autumn term – I’ve almost never seen less obvious snagging to do.

It all starts with the very well made exterior, where the joints between panels of shimmering slightly matt double-curved stainless steel are to tiny, precise tolerances. No Gehry-like boilerplate aesthetic here, this is all about the exquisite detail. The skirt of this garment is delicately lifted on both sides – revealing smooth concrete on the college side, and glass on the public side, where there is a part-sunken gallery and function space. 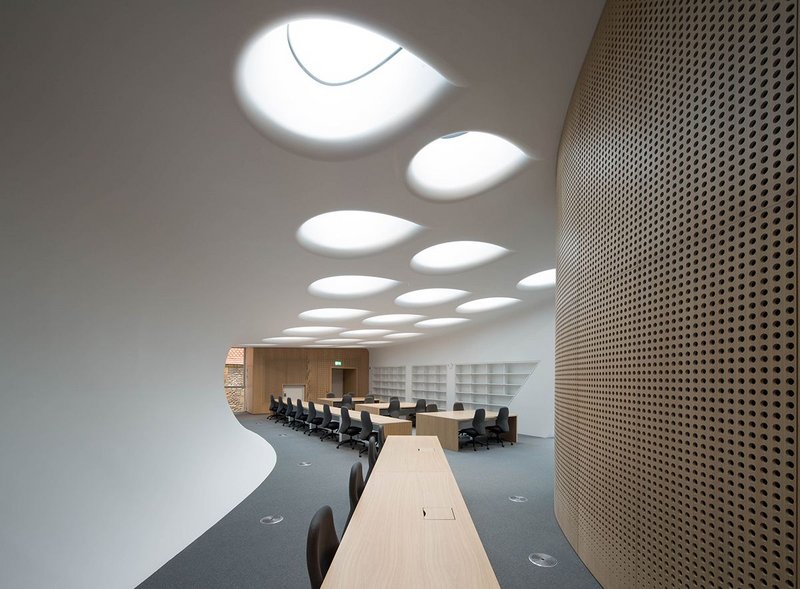 The library with its 'soft' ceiling and teardrop skylights. Credit: Luke Hayes

The college context in which this sits is interesting, varying from the tile-hung Arts and Crafts aesthetic of some of the inherited older 19th century buildings to the polite modern of Bennetts Associates’ twin 2013 entrance blocks, via the prime 1970 brutalism (impolite modern), of the Hilda Besse dining hall/bars/common rooms building by HKPA with its hooded window shrouds like chameleon’s eyes. There’s a dash of 1990s brick-and-slate semi-trad to be found here, too. In other words it’s the usual collegiate jumble, given a sense of enclosure and order by Bennetts’ planning but with only one standout building – HKPA’s – until now, when a second has arrived.

Zaha Hadid Associates (ZHA) trialled a number of materials for the Investcorp Building, including Corten oxidising steel and smooth plastic, but in the end the glimmer of slightly textured stainless steel won through. A very practical consideration ruled out Corten in leafy north Oxford: bird droppings. Once cleaned off it, marks remain which take a long time to re-oxidise. Given the huge and protected specimen Sequoia tree at the front, round which the new building tiptoes, a hose-down building makes better sense. Aesthetically, it introduces another external material to the collegiate mix but in a relatively neutral way, clashing with none of the existing.

The University’s Middle East Centre – one of seven international research centres grouped at St Antony’s – wants to announce itself to the world. It may be away from the historic centre but it benefits from having the university’s centre of gravity shifting towards it as the enormous redevelopment of the 4ha Radcliffe Observatory Quarter nears completion close by. You can see the care that has gone into the Investcorp Building, which beneath the skin is a composite structure engineered by ZHA’s frequent collaborator AKTII: in-situ concrete with a roof structure of concealed glulam braced portal beams. The 118-seat lecture theatre lies beneath the lawned courtyard behind, and uses precast concrete planks spanning 10m between retaining walls to make a column-free space.

Inside, what could have felt like a hemmed-in building is given a sense of spaciousness by the flared southern end rising to three storeys, fed by a curving stair with tight turnings, while the gallery/function room downstairs visually borrows the garden round the sequoia to give itself a sense of openness. The flare on the western, road side provides more space for the library but internally this feels a little odd: the space curls off and then just ends at a blank wall where you might expect to find a doorway. However, what attracts your eye in the library are two other things: a large window right up against the tile-hung building on the northern side, and an arrangement of teardrop-shaped rooflights seemingly carved into the smoothly plastered ceiling. These apparently recall an aspect of a never-built Niemeyer project for the college alongside, and are sized to fit into the invisible, complex structure that lies beneath.

Back to function: all this amounts to an extra 1,200m2 of floorspace, plus the extra lecture theatre, for the centre. In research terms, perhaps the most useful aspect is the set of climate-and-fire-controlled rolling storage stacks for the centre’s historic collection in the basement: previously storage was basic to say the least. But a lot of the work of the centre concerns public lectures and debates, and here Zaha’s new building with its oak-veneered lecture theatre and break-out space takes on a public function: what she calls ‘Global discourse and greater understanding of the region…a forum of research, understanding and global debate’.

It carefully avoids any stylistic reference to any particular part of the ‘middle east’ – as it should, given the many different cultures, religions and outlooks that it serves. But, this being by Zaha, it is singular in itself. Lord Hervey, thinking of houses and watches, would have to think along different lines: habitable jewellery, perhaps, or cyclopean furniture.