Maria Smith spins a yarn of hope and disillusion

When I was at university, ‘sustainable architecture’ was a thing you could be into; an alternative style you might adopt that involved things like rammed earth, straw bales and Trombe walls. Not being into it took the flavour of adolescent smoking; of relishing our impending end and being too painfully cool to be earnest.  Now of course we don’t need to worry because all architecture is sustainable. Isn’t it? Then what is this circular economy everyone’s talking about?

The origin of the term ‘sustainability’ in this context is the 1972 ‘Limits to Growth’ report commissioned by the Club of Rome. The report recognised that if growth trends (population etc) were allowed to continue unchanged, then planet earth would reach carrying capacity before 2100. However, if these growth trends were altered, then it would be possible ‘to establish a condition of ecological and economic stability that is sustainable far into the future.’ Then in 1987, ‘Our Common Future’ published by the World Commission on Environment and Development, recognised that there are limits ‘imposed... by the ability of the biosphere to absorb the effects of human activities’ and that ‘sustainable development can only be pursued if population size and growth are in harmony with the changing productive potential of the ecosystem.’ In other words, the term ‘sustainability’ came about to highlight a negative but somewhere along the way became co-opted to designate a sub-type of the very thing it opposed.

Our Sustainability Kid was no match for Captain Capitalism. Motivated by limitless power, Captain Capitalism was able to see past their scientific and moral differences and mercilessly consume Sustainability Kid whole. The composite superpower, Super Sustainable Capitalism Man gained strength throughout the 90s and 00s and while the polar ice caps melted we drove our Volkswagens to work safe in the knowledge that our vindicating sustainable design award certificate was in the post. All too soon, sustainability had nothing to do with the limits to unchecked growth, and instead became a box for the business savvy to tick.

As the new millennium progressed, Super Sustainable Capitalism Man’s power began to wane. The financial crisis violently brought the notion of a limit to growth back into the public consciousness. Time for a new hero: enter The Incredible Circular Economy. This was an older superhero whose origin story played out in the 1960s, but in the aftermath of the crash, the Ellen MacArthur Foundation and others brought the Circular Economy into public and political favour. Inspired by natural ecosystems, a Circular Economy is a system where the outputs of every process form an input to another, round and round with no wasted resources or energy flinging off and causing harm. It is framed in direct opposition to exploitative, polluting, linear systems. Super Sustainable Capitalism Man will of course not take this lying down but this time, we know his playbook.

Slowly, Super Sustainable Capitalism Man will use his mind control powers to corrupt The Incredible Circular Economy’s gallant mission until in the mind of the masses it’s no longer an attack on the linear systems that exploit human and environmental resources leaving mountains of waste in their wake, and instead becomes an engineering problem that can be fixed with more efficient technology. As this belief takes hold, Super Sustainable Capitalism Man will audaciously swan in as the hero, professing that the solution lies within his capitalist arsenal! The evil genius!

When I was at university, ‘sustainable architecture’ was a thing you could be into. Now it is both indisputable and meaningless to equal extents. There is no question that buildings shouldn’t be ‘sustainable’, and there are no ‘unsustainable’ buildings; which is in too large a part a semantic accomplishment. Can we learn from this appalling achievement? Is the blooming profile of the Circular Economy our second chance? Can we stop Super Sustainable Capitalism Man from subsuming The Incredible Circular Economy like he did Sustainability Kid? Can we help The Incredible Circular Economy defeat the overlord and save the world? •

Maria Smith is a director at Interrobang architecture and engineering and Webb Yates Engineers, and is co-chief curator of the Oslo Architecture Triennale 2019 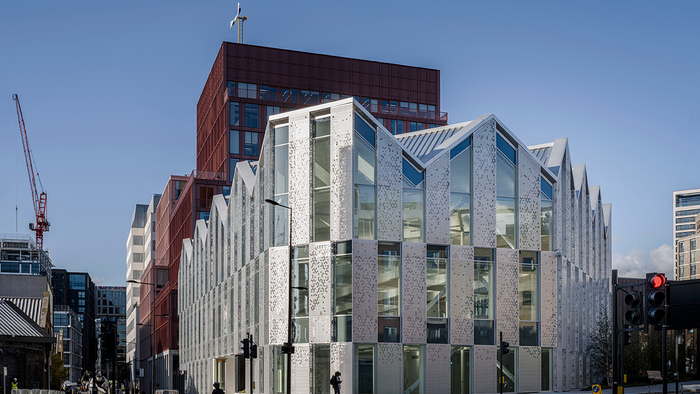 Coffey Architects’ filigree building is all about lightness