Tucked away on a long, narrow and tapering wooded site opposite Wimbledon Common in south-west London, the house by Richard and Su Rogers for his parents Dada and Nino is all about privacy, despite being on a main road and being what Rogers described as ‘a transparent tube with solid boundary walls’. In fact it is two buildings, with the smaller housing a separate flat and (originally) Dada’s pottery studio. That screens the main house from the road, with a small courtyard between them and a private garden behind.

Anticipating in miniature his former partner Norman Foster’s later Sainsbury Centre, the two-part house is made of a sequence of eight welded clear-span portal frames (five for the main house, three for the flat/studio, all painted bright yellow) made of standard steel sections. They are clad in walls of neoprene-jointed composite panels with plastic-coated aluminium skins and a foam plastic core. Most internal partitions are moveable, while bathrooms are top-lit. Full-size double-glazed units enclose the ends. Following Rogers’ gift of the house to Harvard in 2015, it underwent a thorough refurbishment carried out by Philip Gumuchdjian Architects, completed in 2018.

In a 2018 interview with Ben Hobson of Dezeen, Rogers said: ‘This was going to be a standardised system to solve the whole of the British housing problem. It didn't! But it did certainly lead to most of the work which I still do some 50 years later and more.’

This project changed the architectural weather. Though clearly influenced by the 1960s ideas of Cedric Price and Archigram, nothing like it had previously been built. Industrial in spirit but far from functionalist, its gleefully decorative and colourful use of exposed structure, services and circulation – partly driven by a need to keep the overall height of this 100,000 m2 building down by avoiding interstitial service zones, partly to avoid the expense and bulk of enveloping it, but mostly for the fruity articulation of it all - can be identified as a distinctive strand of postmodernism, or pop-modernism. It was not cheap, costing 993 million French francs, the equivalent of around £100m at the time.

Key to the success of the building was Piano and Rogers’ collaboration with engineer Peter Rice on the development of a hybrid structure: a system of tubular steel trusses spanning the entire width of the building, connected to cast-steel ‘gerberettes’ which clasp the vertical tubular columns and cantilever outwards, linked by steel tie rods at their ends, to form a deep zone of external services. That in turn allowed huge column-free spaces inside on reinforced concrete floors.

It was and is a ‘mediatheque’ with library, art gallery, exhibition space, cinema, shops, cafes and restaurants, all areas of the building capable of being reconfigured at will, as is the cladding. But what caught the public imagination was less all that than the urban space. Half of the site is given over to a public parvis, sloping gently down to basement level. This place of informal assembly is dominated by the principal façade, defined by its transparent escalator hung audaciously outside the structural zone, snaking up the façade to the top. Many visitors never went inside at all, and came only for the ride (free entry in the early years). Those who did venture in found a cavernous internal space to match the one outside. This was Rogers the democrat in action. This was a palace for the people, not a monument to the cultural pretensions of a French President.

First renovated at the end of the 20th century, it is to close again for another renovation from the end of 2023 until 2027. This will largely concern replacing the services which raises a conundrum: the technology of building services has changed considerably since the mid-1970s, yet it has been announced that the external appearance of this building designed for ultimate flexibility will not change. The Pompidou Centre will thus become preserved in aspic just as much as any ancient monument: an unintended consequence of its extraordinary success.

Lloyd’s is a late-1970s building design completed in the mid-1980s, by which time a very different kind of postmodernism was in the ascendant. It remains the single most radically different piece of architecture in the City since Soane’s Bank of England. Here the Gothic sensibility meets Italian Futurism.

The client and the use – marine insurance underwriting – was utterly different from the earlier Pompidou Centre. So was the site, an existing 1928 neoclassical palazzo by Sir Edwin Cooper, set in the tight medieval streets of the City of London. No room for a new public realm here. Yet the City’s desire for large open ‘trading floors’ with great flexibility led to a related response, again with the services – including some very dramatic glass lifts - pushed visibly to the exterior in order to make large clear-span spaces inside, in this case arranged around a full-height atrium which rises to a glazed barrel roof, reminiscent of the Crystal Palace. Having outgrown its two previous 20th century buildings, Lloyd’s wanted expansion space, and this Rogers provided by stacking the building 12 floors high, with the service towers going higher, to 84m.

The exuberant colours of the Pompidou Centre are entirely absent from the polished stainless steel exterior. While Cooper’s highly impressive 1928 entrance portico, the best part of the old building, was retained at one end, the new main entrance with its long suspended glass-and-steel canopy was placed at the other, on Lime Street.

It is an inward-looking building, the atrium (originally with a public viewing gallery) being a spectacular place, criss-crossed with its banks of show-the-workings escalators, the moving parts in Rogers yellow. The column-and-beam internal structure is exposed and beautifully made. The detailing is impeccable throughout, showing the hand of Eva Jiricna. A surreal touch is the Adam boardroom, originally rescued in 1955 from the demolished Bowood House in Wiltshire, moved to Lloyd’s 1950s building nearby, and finally moved again to the ninth floor here. 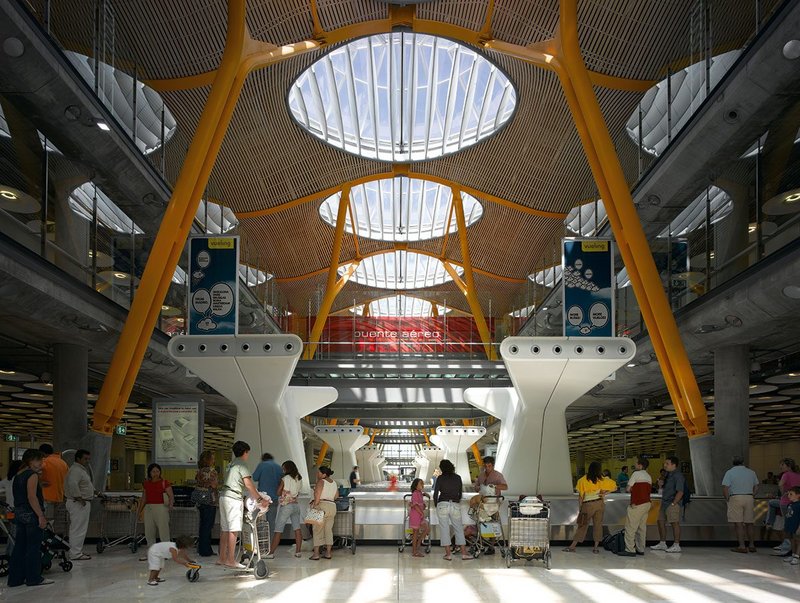 This, Spain’s largest air terminal, was the building that won Rogers Stirk Harbour its first Stirling Prize, in 2008. By now Rogers and Ivan Harbour (also project partner on the earlier European Court of Human Rights) were literally making waves, the undulating top-lit roofs of the terminal – soffits clad in bamboo - giving this large passively-ventilated concourse a more human scale. It was in 2007, following the completion of this project, that Rogers changed the name and constitution of the practice from the Richard Rogers Partnership to Rogers Stirk Harbour & Partners so as to fully reflect the leading contributions of Harbour and Graham Stirk.

This was one of the most colourful Rogers projects for years, with the shifting colour palette of the slender canted steel columns helping to define the zones within the concourse. Outside, the steelwork is the characteristic Rogers yellow.  It brought a sense of fiesta to the mundane business of processing people for travel from a hub airport, and as all airport terminals must be, is designed for easy expansion with satellite terminals.

It is significant that the six-storey terminal concept – three levels above ground, three below - drew on the 1995 design in the studio for London Heathrow’s Terminal Five which in its early incarnation was imagined as being much more like this, before the value engineers set to work. T5 turned out pretty well, but you can’t help thinking that London’s loss was Madrid’s gain.

Billed as Rogers’ last building, a drawing gallery on a Provencal wine estate is a nice little project to round off an architectural career. A simple square-section tube contained within a tubular steel exoskeleton – for once orange rather than yellow – cantilevers out across a ravine from one of the high and more remote points of this 200-hectare site. It is surrounded by the vineyards of this ambitious château with its strong sculpture and architecture programme – other architects with buildings there include Frank Gehry, Tadao Ando, Kengo Kuma, Jean Nouvel and Rogers’ old mate Renzo Piano.

Where Piano’s exhibition gallery sinks itself into the ground, Rogers’ launches itself into space. He personally selected the site on a visit to the château in 2017: his idea being a building that focused the view like a box camera. As you walk through the temporary exhibition space, this view opens up, giving way to an open covered area terminating in a balcony.

The building returns to the preoccupations of his youth: the glazed tube, the steel-framed clear space. But here done with an open programme. It can be used in various ways internally, but it’s all about the walk into the light and air. 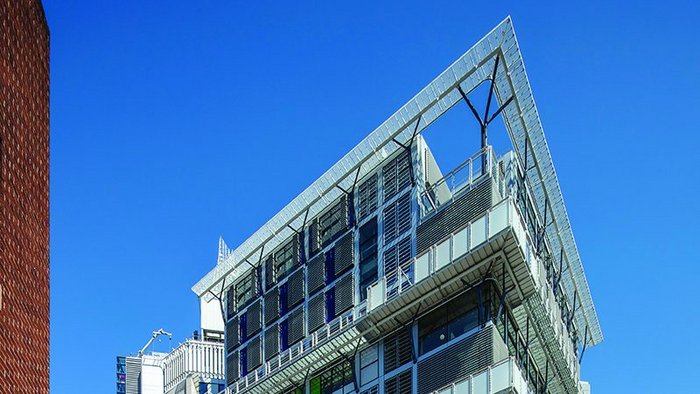