Olafur Eliasson feeds our senses and challenges our sensibilities about climate change in his Tate Modern exhibition, In Real Life 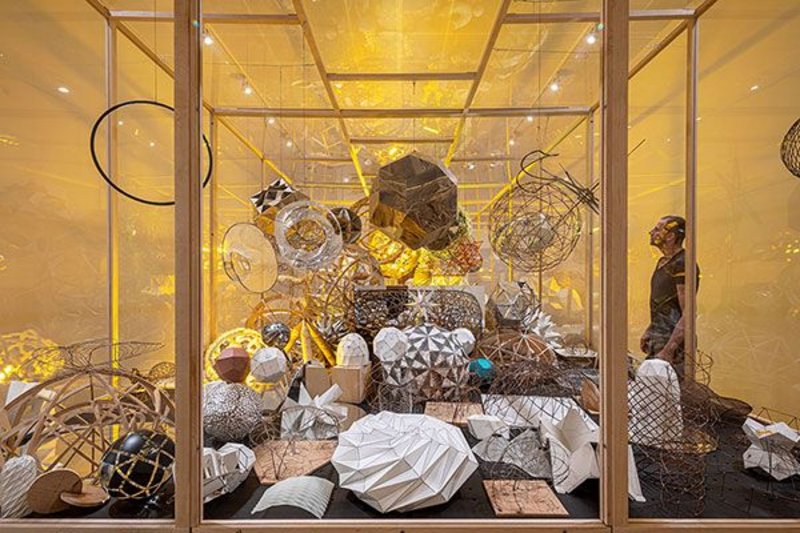 I am stroking a wall. Not just any wall, but a vast surface covered in spongy, beige reindeer moss at the Tate Modern’s splendid new exhibition on the Danish/Icelandic artist Olafur Eliasson.

We are invited to touch the moss, which is typical of the sensory approach that runs through the work, whether it be shuffling our way through a dense, blinding artificial fog, marvelling at a dazzling kaleidoscopic version of ourselves, or simply enjoying the sound of rain softly falling.

Olafur Eliasson: In Real Life is the first time that the artist has brought 30 years of his work together. It’s fitting that this should take place in the gallery where he made such an impact back in 2003 with his Turbine Hall installation The weather Project. For Eliasson, it’s rather like coming home: ‘I feel like close family with the Tate,’ he said at the preview.

The exhibition shows 40 works, kicking off with a fantastic array of 450 research models, gathered together cheek-by-jowl in one vitrine as a treasure trove of geometric explorations. There are polyhedrons, spirals, meshes, created in all sorts of materials including wire, card, wood, foam and rubber. These set the intellectual context for the show by drawing attention to the serious research and thought that underpins Eliasson’s art practice, and in particular the great interest in geometric forms that so clearly influences his work. This is demonstrated outside the entrance to the show in the stunning Stardust Particle, a new work that Eliasson has gifted to the gallery.

Another key strand running throughout Eliasson’s work is nature. This appears early in the exhibition in work dating back to his student days, including the aforementioned moss wall. Eliasson, who spent much of his childhood in Iceland, is clearly drawn to the landscape and latterly the impact of climate change on it. Having documented melting glaciers in a series of photographs in 1999 he is now working on a forthcoming companion piece of the same glaciers now – the difference is expected to be startling. A series of ‘glacial works’ includes The Presence of Absence Pavilion, a new work cast in bronze that makes visible the void left by a block of fished glacial ice that has subsequently melted. Other pieces use melted glacial water or glass made from rock particles created by glacial erosion as part of the artistic process.

However stimulating, these pieces will inevitably be overshadowed by the instantly appealing installations that play with viewers’ perceptions through reflection and distortion. There is lots of fun to be had here, not only the delight of seeing oneself projected, reflected and fragmented in kaleidoscopic installations such as Your Planetary Window and Your Spiral View, but the joy of the collective experience, something Eliasson so memorably produced with The Weather Project in the Turbine Hall, where viewers lay on their backs to observe the installation. Curator Mark Godfrey talks about the idea of the audience ‘co-producing the work by experiencing it’. Eliasson himself is keen that audiences not only have a shared experience, but that they can have different responses without having to agree.

In Your Uncertain Shadow (colour), five different colours of light project visitors’ shadows in a large scale onto the gallery wall. In another work we look up at a glass ceiling, and see a reflection not only of ourselves, but of the dark loop that hangs down across the room like a skipping rope. Combined with its reflection, this loop has become a whole circle.

More disconcerting sensory installations follow, notably Big Bang Fountain. In this, the visitor plunges through two layers of heavy black out drapes in intense darkness before emerging into an equally dark room. Every 10 seconds, a strobe light flashes once to illuminate a small installation of flowing water. The effect captures this every-changing piece for a split-second, seemingly as a sculpture. The immersive Din Blinde Passage (Your Blind Passenger) is disorienting, combining artificial dense fog with white and yellow lighting. As visitors inch though the space, arms held out to feel the way, they experience changing colours before rather gratefully emerging back into the main exhibition – apparently our eyes are making complimentary colours in response to the light, although not everyone has the same experience. I very much enjoyed the visual and aural tranquility of Beauty, in which misty water wafted to the ground in an all-black room. This was a pleasure, despite not seeing the shimmering rainbow that, depending on where you’re standing, can be visible.

The last portion of the exhibition is The Expanded Studio, a space devoted to conveying the activities and atmosphere of Eliasson’s studio in Berlin. As well as making, research and activism, we learn about his architectural offshoot Studio Other Spaces and projects such as Little Sun, the solar light designed by Eliasson for off-grid communities. We learn about the studio’s intellectual workings – one wall is devoted to a giant scrapbook of leaflets, articles, print-outs and images, including an A-Z of questions relating to everything from buying local to the difference between empathy and compassion.

At the very end of the exhibition, in a neat bookend to the opening Model room display, there is a table where visitors can have a go at building their own models from a construction kit - apparently the best effort might earn a place in the opening vitrine. In the Turbine Hall, visitors can help create a cityscape made of Lego bricks from 26 July–18 August in the latest instalment of Eliasson’s The Cubic Structural Evolution project.

While Eliasson’s work appeals primary to the senses of sight, sound and feel those of taste and smell are not forgotten. Inspired by the canteen at Studio Olafur Eliasson, the artist has taken over the menu of the gallery’s Terrace Bar restaurant, which is now serving organic, vegetarian, locally-sourced products. From here, diners can look out onto Eliasson’s newly installed, 11m high Waterfall sculpture on the adjacent terrace.

Although this show covers 30 years, Eliasson himself says he thinks of the exhibition as a mid-career survey. ‘There’s still lots to come, I hope,’ he says. And the thousands of visitors who are sure to enjoy this exhibition will, doubtlessly, agree.