Built to mark the 80th anniversary of a massacre by Nazis in the Ukrainian capital of Kiyv, the Babyn Yar synagogue eschews the sober, pared-back language that has come to typify holocaust memorials. Instead Swiss-based practice Manuel Herz Architects has created an extraordinary unfolding building inspired by pop-up books and the idea of a ‘cabinet of wonders’.

Manuel Herz believes it would have been fundamentally wrong ‘to attempt to build something monumental and sombre because we could never match the monumentality of the massacre with monumental architecture’.  Nor did he want to design a building with a single definitive message. Instead, he sought to create a building that offered a new ritual through its transformation.

In the wrong hands, it could easily have been gimmicky. But this kinetic building, which takes around 15 minutes to manually open-up, creates a structure that has the appropriate memorial gravitas while also uplifting the spirit. It does this by looking to the future, as well as remembering the atrocities of September 1941, when the Nazis shot 34,000 Jews in the Babyn Yar ravine on the outskirts of Kiyv. Many thousands more Ukrainian nationalists, Roma, Soviets prisoners of war and mentally ill people were also killed during the Nazi occupation of the city.

‘It’s very important that it points to a new future – it isn’t only commemorating the past but is celebrating a new future,’ he emphasises.

Launched this month, the synagogue is set within a memorial landscape on the site of the Babyn Yar massacre. It is, says Manuel Herz, a site ‘literally and metaphorically soaked in blood’. The brief was to create a symbolic synagogue that was commemorative, but also anchored contemporary Jewish life on the site.

It was a fast-track project – Herz was only appointed in October. Fortunately the pop-up book idea came to him quickly. He points out that books in general are strongly anchored in Jewish thought, with the synagogue congregation coming together to collectively read a book.  The idea of the collective process of turning a wheel to mechanically open up the building appealed, as did the ‘magic’ nature of the pop-up.

With the memorial site effectively a burial ground, Herz was careful to take a ‘tender’ approach with a design that required only the shallowest of foundations and didn’t impose itself too strongly on the landscape. Instead, in its closed book state, it is slender and flat - less than 3m thick, albeit stretching 8m wide and 11m tall. As it opens out to reveal the interior, a roof lifts up to provide shelter. There are two further pop-ups – a first floor balcony, reached by a staircase,  where traditionally women would sit, and, on the ground floor, the Bimah reading platform for the Torah.

Designed in collaboration with mechanical and structural experts, the synagogue has a steel structure clad in old oak sourced from all over Ukraine. As well as being beautiful, says Herz, this was chosen because it connects to a time that predates the massacre, and also represents the whole country. The cladding also references the wooden synagogues built in Ukraine in the 17th and 18th centuries.

The interior is extensively decorated with traditional iconography, prayers and blessings, including one for turning a nightmare into a good dream. The ceiling is painted with flowers in a pattern that references the star constellation that would have been visible at the time of the massacre. Herz hopes the decoration will help unite the death and destruction carried out on the site with the ‘beauty of life’.

Herz is delighted with the finished synagogue, and praises the client for having the courage to proceed with such an adventurous design.

‘It’s a super-radical building in all aspects – conceptually and mechanically. This was the challenge that the client accepted and realised in the shortest of time and the best quality,’ he says.

This is neither Herz’s first synagogue nor his first building with moving parts – he completed housing in Zurich with a facade that opens up to create canopies and walk-in balconies and has also designed a new synagogue in Mainz. Ongoing projects include a hospital in Senegal.

The synagogue, which will be open to the public, is the first of several structures planned by the Babyn Yar Holocaust Memorial Center for the 150ha memorial landscape. 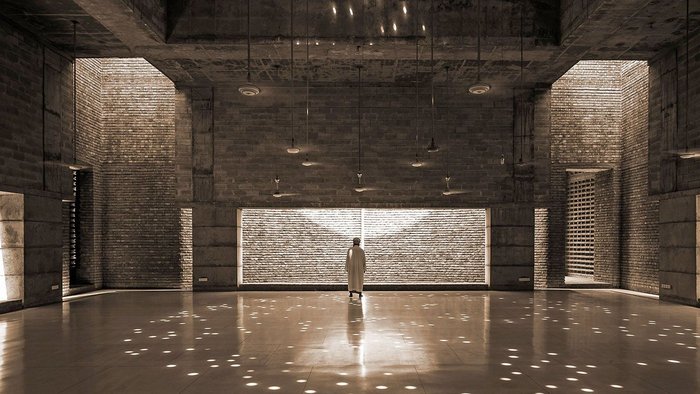