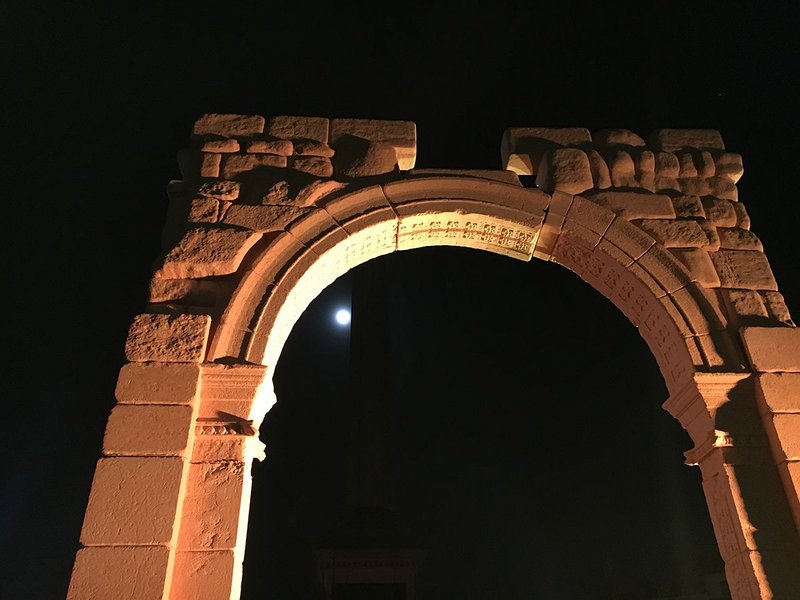 A ceremony to celebrate the creation of another replica of the arch is being planned for New York some time in September. Credit: Institute of Digital Archaeology / TorArt

At the heart of the World of Fragile Parts exhibition at this year’s Venice Biennale sits a doppelganger once removed. It is a chunk of yellow, Egyptian marble; the top of an arch that has been carved with floral motifs. It is an echo of an echo, a copy of a copy of the destroyed victory arch from Palmyra. The original arch was constructed around two centuries after the death of Christ in modern-day Syria partially to commemorate the might of the Roman Empire but also as an integral part of an architectural set-piece which reconciled a kink in the main colonnade as it ran in the direction of the Temple of Bel.

But as we have said, this chunk of stone is a copy of a copy. The original was destroyed in October 2015 along with much of the remaining ancient site by the so-called Islamic state – or Daesh as the British authorities chose to call it. This act was repeatedly invoked when the replica to it is was constructed in Trafalgar Square earlier this month and will be again when another copy is erected in New York in September (and no doubt again should the plans to create another copy during the World Government Summit in February 2017 come to fruition).

Indeed the copy has achieved almost greater fame than the original. The unveiling of the replica arch in London opened the Brumaire of Boris Johnson; a dress rehearsal for his first-as-tragedy, second-as-farce Churchillian leadership of the Brexit movement. Making a play on the name of the organisation behind the construction, the Institute for Digital Archaeology, Johnson declared ‘How many digits do Daesh deserve? Two digits to Daesh from London!’ The oddly slight arch however did not begin as a political gesture. In fact – and this may not come as a massive surprise – the origins and the meanings of the arch are far more complicated than Johnson would have it.

And of course the arch didn’t look like a statement of defiance. It looked strange. Set against the National Gallery, it appeared very yellow.  Although it was made in Carrera in Italy using CAD-driven machine carving, the stone is Egyptian, as it was cheaper. It also was oddly slight; two-thirds the size of the original. The maximum permitted load on Trafalgar Square is 12 tonnes, so the Institute decided to construct to this cubic limit rather than its height. Yet there is something else. As Alexy Karenowska of the Digital Archaeology Institute puts it: ‘Re-productions are factually very simple – "here’s one like that," they say. But conceptually they are incredibly complex.’

The Institute was established in 2011, with the ostensible task of bringing new technology to archaeology. ‘The reality is that until very recently archaeology has not been a relatively high-tech industry or subject… It has very little overlap with technology and the sciences,’ says Karenowska, who has a degree in Physics and Engineering. The Institute began with helping archaeologists learn how to access tools such as multispectral or reflectance transformation imaging in order to reveal new profiles to surfaces which are invisible to the naked eye. This provides new information as to provenance or date but also, in the case of documents, hidden or removed texts.

Yet the Institute never had a solely technocratic function. One of its early propositions, since archaeology is a cultural endeavour, is a database of images of threatened statues, structures and sites throughout the world; known as the Million Image Database (MID). This database could then be used to create 3D models using software such as ZBrush. As it transpired however, the database took off and has become something of a cause celebre, promoted by a dedicated team whose director Roger Michael has a flare for the winning phrase. ‘By placing the record of our past in the digital realm, it will lie for ever beyond the reach of vandals and terrorists,’ he has said.

Increased political instability throughout the Middle East and North Africa has led to the destruction of archaeological sites and heightened fears about the safety of others. Thus the MID has attracted a huge amount of attention. It was nominally launched at the unveiling of the arch, but according to Karenowska, ‘we have the beginnings of that site up and running but over the next year or two we will be adding images’. The photographs aren’t simply taken by the Institute but by interested parties in the field, particularly those in areas that are difficult to access. The Institute provides these groups with basic digital camera kits to take photographs of vulnerable antiquities which are then sent to the Institute to catalogue.

So the arch was conceived very much as a means of publicising this activity: a physical manifestation of a much wider act of surveying. Yet as Karenowska points out, ‘As soon as you create a physical version of something all sorts of interesting philosophical issues kick in.’ And it is in this regard that the arch becomes something of a challenge to architects. It is clear that those in the Institute are less hung up on originality than some people. ‘The reality is that our personal relationship is almost not at all through the physical object, it’s with the set of things that that physical object makes us think about,’ says Karenowska.

Of course, the archaeologists aren’t advocating deceiving anyone, but the Platonic idea that a beautifully crafted object is simply a signifier of an idea – be it a philosophical concept or shared cultural totem – overlooks a certain physical reality. The Palmyra arch for example was made from around 100 images most of which were taken by tourists over the last five years. One of the technicians who modelled the project explained at the launch that the digital model was created so that the final version looked as it did ‘before bullets’ – the effects of the war on the arch were removed.

It would be churlish to question the intention behind reproducing the arch. The project, heavily funded by the Museum of the Future in Dubai, is a very clear attempt to foster not just a pan-Arabic solidarity in the face of threats to the patrimony of Syria but also an international, humanist response: a rejection of the re-writing of history. In these circumstances it is understandable that archaeologists would wish to create a solid version of the status quo ante bellum. However, this detail shows that even verisimilitude requires editorial decisions to be made; a fact which suggests that the technology has as much potential for artists as it does for museums.

Indeed, the arch poses a huge number of questions many of which are explored in the V&A Museum’s World of Fragile Parts. Put together by the curator Brendan Cormier, it explores the transfer of knowledge through copying in the 21st century: a kind of cast court for the modern day. ‘Some projects look at the potential for new creative expression through copies, while others question how faithful a copy can be,’ says Cormier. Of course, there are no reasons why archaeological and artistic uses cannot sit side by side, but as digital scanning, modelling and then printing proliferate; it has as much potential for artists and architects as it does for museums.