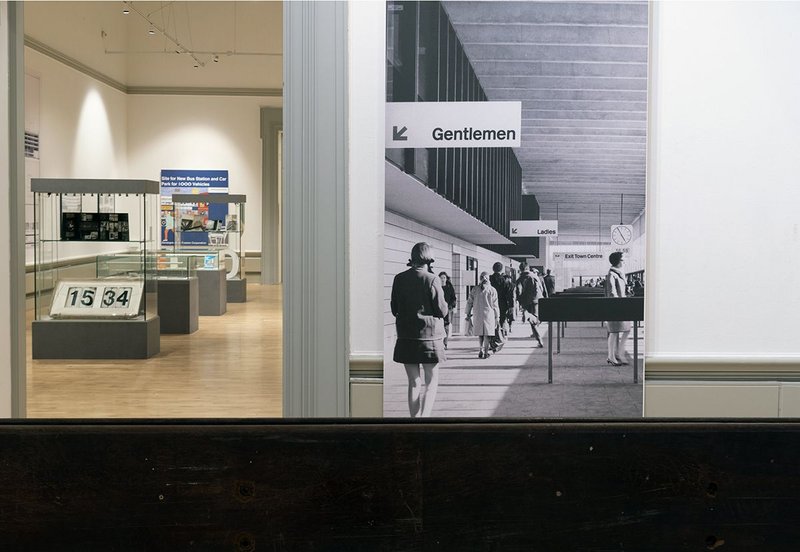 Installation of the Beautiful and Brutal– 50 Years in the life of Preston Bus Station exhibition. An archive interior image is on the right. Credit: Ian Clegg

Once Charles Quick, co-curator of a new exhibition celebrating Preston Bus Station, has bombarded me with impressive statistics on the pioneering and innovative spirit of Preston, it seems perfectly reasonable that the city should have commissioned such a monumental brutalist masterpiece.

Over the years Preston has, I learn, built the highest church steeple, Europe’s largest single dock, and back in 1200, the largest single market in the North West. It is also the wettest city in England, hence the need for a bus station that offered shelter to waiting passengers.

‘Preston takes risks and has a huge sense of ambition,’ says Quick, professor of public art practice at The University of Central Lancashire. ‘The bus station is quite an extraordinary building. But it is very much of Preston.’

Designed by BDP, the bus station was the largest in Europe when it opened in 1969, with 80 bus bays and multi-storey car parking for 1,000 cars. It was saved from being redeveloped as a shopping centre after a long campaign resulted in its grade II listing, and subsequent rehabilitation by architects John Puttick Associates.

The exhibition Beautiful and Brutal: 50 years in the life of Preston Bus Station permeates the whole of the Harris Museum Art Gallery and Library building, popping up in parts of the museum’s main collection as well as taking over three temporary exhibition spaces.

Quick and co-curator James Arnold of the Harris have worked hard to bring the spirit of the bus station into the building. At the entrance there is a replica of one of the bus station’s ticket kiosks cast using the original fibreglass mould, followed by one of its iconic yellow arrow road signs, some of the original Helvetica numbers from the bus bays, tables and chairs from the station’s original café, and the original digital clock mechanism and graphics. Further artefacts are displayed in 15 cases throughout the building including a barber’s chair lent by a a gents’ haircutter who’s been based at the bus station for more than 40 years, and a set square used by one of the joiners who worked on the bus station. Appropriately, given the building’s narrow escape from demolition, the exhibition has space for a banner from one of the many campaigning events to save it.

BDP was then a local firm, founded by George Grenfell-Baines, who worked on the railways before studying architecture. His diary is included in the show, along with material drawn from the archives of BDP, bus station engineer Ove Arup & Partners, and the local council. One of BDP’s hand-drawn plans of the bus station is shown 5 metres wide, supplemented with other drawings and large-scale photographic images plus original graphics designed by BDP’s Keith Ingram.

While architecture is at the heart of the show, the curators were keen that it should also be about the social history of the building and its contribution to the city. Video portraits commissioned by Anna Raczynski from 22 local residents, staff and visitors harvest memories and thoughts about what the building meant to them. Other art commissions included a performative piece staged by Keith Harrison involving choreographed movements from 32 buses at the station.

While Quick is a great fan of the building, he acknowledges its imperfections – faulty doors led to unpleasantly cold conditions for waiting passengers and the station’s underpasses were always unpopular. Fortunately, these issues have been addressed and the underpasses are gone. An adjacent new square now nearing completion should better integrate the bus station into the city.

‘It’s a very special building and we’ve tried to get that across in the exhibition,’ he says.

Quick hopes the show will bring the landmark to wider attention, not just in the city, but far further afield. Staging it has, he says, shown how important the building is for residents – he estimates some 500 have engaged with the show’s development with many locals bringing in personal artefacts for inclusion.

‘There’s so much love for the building,’ says Quick, pointing out that during the campaign to save the building, some 65% of locals polled wanted to save it from demolition.

Celebrations continue with a birthday party for the building on 19 October and a conference on 9 November.

Beautiful and Brutal: 50 years in the life of Preston Bus Station, until 24 November 2019