The Jerwood Gallery in Hastings put them on the map; now Hana Loftus and Tom Grieve are extending their hands-on approach 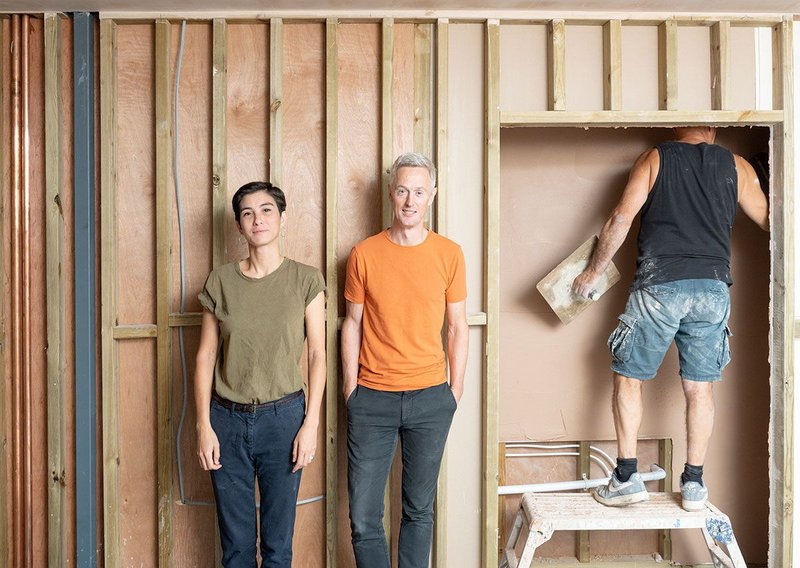 Hana Loftus (left) and Tom Grieve with plasterer downstairs at Trinity Works in Colchester. This is going to be the kitchen of Café Saison. Credit: Ivan Jones

If you want to know how buildings are made, visit HAT Projects in Colchester. Hana Loftus and Tom Grieve have a habit of getting into construction on their own account – both on their largely self-built extended house in the countryside and in their own new studio. This is in what had been a 1974 Christian Science church, right in the medieval centre of town. Now it is Trinity Works, set to become a creative hub along with Colchester Makerspace which runs classes and workshops, providing the equipment for designer-makers from ceramics to textiles. There’ll also be an independent public café.

They saw the church lying empty and up for sale, round the corner from the office they were then renting. It was sound, well-designed by a good older-generation local architect, Bryan Thomas. Above all it was adaptable, with a variety of spaces and a secondary entrance. When a previous potential purchaser pulled out they took the plunge, bought the freehold, began the refurbishment.  The day I visit, they’ve not long moved in. The eight-strong practice occupies the upstairs space behind the original full-height glazing to the narrow street. Down below the light-touch building work continues. The café kitchen and servery are going in. Original 1970s chandeliers have been moved to the main stairwell at the centre of the plan.  As usual for these self-generated projects, the practice-turned-developer is managing all the trades itself, keeping things lean and efficient. They have built up enduring relationships such as with metalworker David Wesbroom of Wesbroom Engineering who has worked on five of their projects including the stair handrail and screen at Trinity Works.

They have a thought-through commercial strategy. The rent from the café (on a 10-year lease) and the Makerspace will help pay for it all, while the architects get themselves a reasonably high-profile shop window. And of course they have a property investment. But the thing with HAT Projects (the HAT stands for Hana and Tom) is that they are anything but small-town architects. In fact they haven’t yet had much work in Colchester (‘The challenge has been winning work locally,’ remarks Grieve), though East Anglia has provided commissions such as the all-new High House artists’ studios in Purfleet, Essex, an exercise in bare-minimum functionalism over three levels using durable materials on an industrial estate. ‘The idea was to make it cheap, robust, affordable – not remotely romanticised,’ says Grieve. At first the planners didn’t quite get the aesthetic and started demanding balconies, says Loftus. ‘Why would you want balconies, next to the largest Carpetright in the country?’  End result: no balconies, just a Cartesian exercise in space and light on a budget of £836/m2. 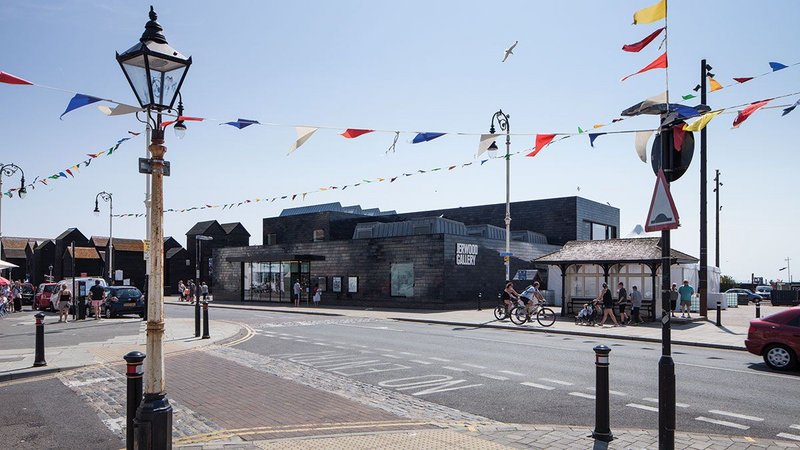 Galleries form an important strand of their work – see also their refurbishment of the Gasworks gallery in Vauxhall.  And no one can ignore the project with which they made their name: the £4 million Jerwood Gallery on the beach in Hastings, opened in 2012. This was in the family – Jerwood’s director Alan Grieve is Tom’s father – but that just increased the pressure to perform. Imagine the critical response, had it fallen flat. And at first there was strong local opposition to the project.  ‘It was horrendous – I felt so exposed,’ says Grieve. But by common consent the young practice played a blinder with its characteristically simple and unaffected solution, clad in locally made glazed black tiles with a metallic sheen (RIBAJ, April 2012). This was and is one of the best and most ambitiously programmed of the regional galleries.

Loftus and Grieve set up the practice in 2007 to handle this – just the two of them at first, working from the bedroom of their recently-acquired Colchester house. They did not want to be lost in the London swirl, and Loftus was from nearby Suffolk. Besides, children were on the way – this is a family unit as well as a business partnership – and both share all the duties both work-wise and parent-wise.  Colchester is a London-commuter town but is large enough, old enough (Roman) and far enough away to be itself.

They had met at Haworth Tompkins and there’s something of the pared down, celebration-of-materials, salvage chic approach of that practice in their work, they are happy to admit. But there are other influences. Grieve, who later worked for Tony Fretton, had  spent his year out at Paxton Locher, where the late Richard Paxton with Heidi Locher set a high-profile – if financially buccaneering – example of the architect couple acting as developer through self-generated projects, generally their own spatially luxurious houses which they would build, inhabit for a while, then sell and move on. Grieve learned something else there, he says: Paxton was fond of technological gizmos but they didn’t always work too well.

When, later, I visit them in their own house out near Fordham, some six miles from Colchester, there’s a notable absence of gizmos. You find two new timber-framed brick-clad pavilions linked to the stripped-back 300-year-old coach house via a roofed courtyard or atrium. The layout is reminiscent of early van Heyningen and Haward: a pavilion for the parents, another for the children, another – the original house – for guests such as grandparents. All three converge on the common table in the atrium. It is a built diagram of family relationships, allowing for future change. 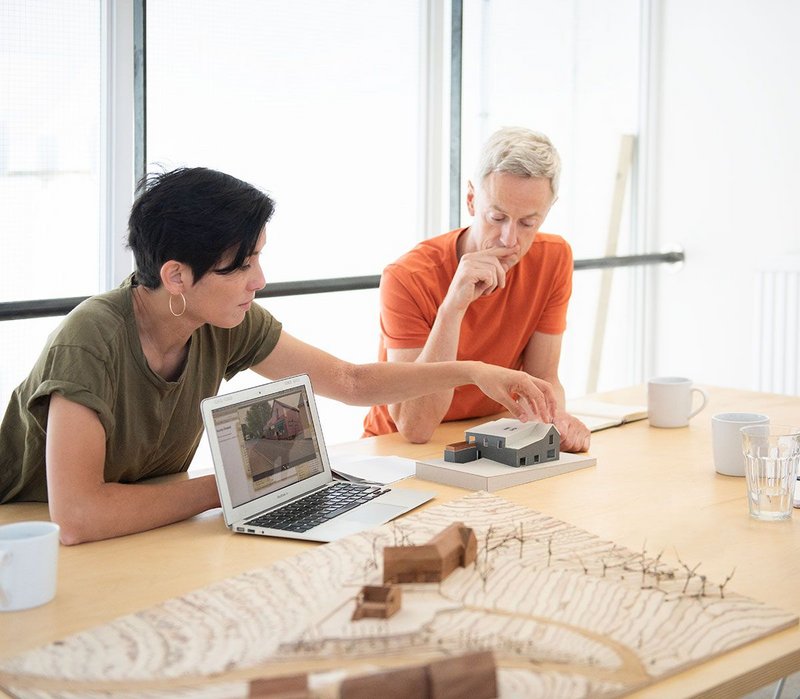 This is the discussion about designing one-off houses. Grieve is the one for those, Loftus is not so keen. Credit: Ivan Jones

Tom has the patience for houses – I don’t

The planned landscaping was put on hold when Trinity Works hove into view to claim the couple’s full-time attention. Before that, Grieve in particular had been working on site at the house in the mornings, doing things such as casting his own reinforced concrete staircase – and learning fundamentals on the way, like making sure the shuttering is stout enough to contain the weight of the material, he remarks wryly, pointing out a slight bulge in the finished stair.

Loftus brings other experience, having worked also at General Public Agency and spent time at Rural Studio in Alabama in 2004-5, designing a $20,000 house as a proto­type for improving the living conditions of those caught in poverty. The collaborative, community-led approach she took part in there has informed the approach of HAT Projects, which places great importance on the consultation side of things – to the extent that some of their commissions are purely consultative. She’s also a member of Public Practice, an initiative set up by Pooja Agrawal and Finn Williams to bring greater design expertise to planning departments; Loftus’ placement is with South Cambridgeshire District Council, working on village housing.

As a small office – Grieve reckons the ideal maximum size is 17 – they share design work though have different specialisms. Neither does practice admin – that’s the preserve of their trusted colleague and musician Robin Alderton, a stickler for detail as they both attest. So the principals are both job leaders. ‘Tom has the patience for houses – I don’t,’ says Loftus firmly, citing agonising over bathroom taps with clients in her case against. This prompts Grieve to respond: ‘I enjoy them – there’s something about working directly for the end user.’  So one imagines it’s mostly Grieve who’s building a new rural house in Shropshire for his now elderly parents – single-storey, designed for easy management, taking its form from agricultural buildings that used to stand there.

They have designed a group of four modern-vernacular houses, Hopton Yard in Suffolk, for a developer and wouldn’t mind a bit more of that. Another 37-unit housing project, as yet confidential, is in hand. Slightly surprisingly, given the visual solidity of most of their work, they have a sideline in lightweight structures, such as a tetrahedral installation at Silver End, the Crittall model village, for the recent Radical Essex weekend.

Although nearly everyone in the office lives locally the capital keeps calling with commissions. Following their makeover of the V&A’s Secretariat reception, they are in the thick of a £2.8 million job making a ‘friends’ suite, the Smith Centre, for the Science Museum, close to the main entrance. Working within former Post Office buildings to make a series of indoor and outside spaces, it’s the kind of light-touch project they are adept at – by necessity, as they reckon the budget could easily have been twice as much.

They seem unfazed by the challenge and anyway, they’ve never been ones to overdo the finishes. ‘When you’ve got materials with patina, you’ve got richness and warmth,’ says Grieve. Ask them to define what their own architecture is and it’s not about style or materials. Grieve reiterates: ‘We want to talk to the actual people who will be using the building – we’re trusted to do that communication job.’ And Loftus adds: ‘You have to have respect in the work that you put in: to be clear, not condescending.’ To work with, and with respect for, the user: it’s no bad mantra.