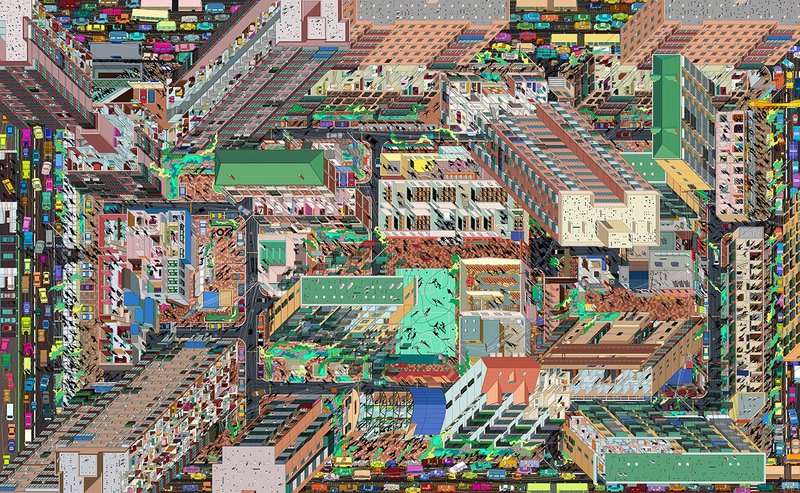 One half of a creative design office investigating ‘new models for the creation of contemporary urban culture’, architect Li Han’s studied observations of the expanding megalopolis of Beijing, while having immediate associations with the likes of Zaha Hadid’s early work and Cubism, have nonetheless a raw energy all of their own.

In two dimensions, Li Han attempts to explain the three dimensional complexity of the ancient low level Hutong areas of the Chinese capital and the breathless expansion of the city’s population, its need evidenced in the rise of high towers. The polar opposites of these two are then brought together in his Dashilar Project drawing, a scheme acknowledged as bringing together the best of the two worlds. This spirit of tradition, post modern frenzy and millennial morphology almost sing from each individual image and work in mesmerising visual harmony when the three are read together. The images almost defy focus, forcing both eye and mind’s eye to slip about on their surface – evoking the disarming complexity and information overload of the contemporary Asian city.

The judges were impressed by the power of the images. Alsop and Parry both found them ‘amazing’, with part of the allure being the way they flipped between the real and illusory and back again. Robson likened their curiously confounding quality to ‘a Google Maps 3D view that hasn’t buffered correctly’, yet Parry noted that ‘on studying them the structure of the buildings comes through with real legibility.’ Pearman felt there was ‘something of Zaha to the work’; Fernie meanwhile, looked beyond the current architectural language associations of the drawings to ‘the influence of 1920s Braque or Picasso’ to this ‘genuinely exciting work.’