Working their way through 50 shortlisted Eye Line submissions, the judges began to see an evolving conversation for the entries that were catching their attention. It was for a bold confidence in the depths of the drawing, about chiaroscuro effects, about the white of an empty page doing as much for the image as the drawn areas. It was for the artist’s belief in the drawing’s potential to take you where you might not have initially imagined going. For the drawing to be a means to an end and not an end in itself; and for it to engage the viewer with its own narrative. Tom Noonan’s Bartlett diploma project had all these aspects in spades and he was unanimously voted winner.

‘This work gives a huge amount to the viewer,’ remarked Cornelia Parker. ‘The kind of artists’ work I like is about creating the space for the viewer to project themselves into it, and not being closed off by the artist’s intent – Noonan’s work clearly demonstrates that.’ For Narinder Sagoo, his execution showed not just skill but intelligence: ‘I love it when people use digital media in hand drawings as a means to get from A to B in the quickest and most efficient way: the marriage of the two here is incredible.’ Alan Dunlop was deeply impressed by the layers of detail, observing: ‘Individual components of the drawing stand alone as images, and are all treated with the same detail and respect. You could break each of these images into six or seven drawings and each would be justified in its own right.’

Compositionally, Noonan’s imagined industrial/techno-rural landscapes are supremely confident; Parker calling them ‘radical’. The white of the page speaks as much as his layered graphite darkness, she said, which can be interrogated to reveal the eco-industry within it. Dunlop said that ‘everything appears to be happening in the bottom of the picture, but it’s all part of a much wider frame of reference’. Skilful plays of scale are also evident. Parker  ‘loved the weird rule-breaking regarding scale. Are things a clump of wood blown up? Is that a wheat sheaf or a machine? In these landscapes things become something else – there’s an otherness to the work.’

But do drawings of landscapes constitute architecture? Sagoo thinks so. ‘The work explores scale, it’s inhabited by humanity, and despite the eco-system narrative running through it – all these are part of architecture.’ And despite that narrative Noonan’s work has a heart of darkness about it. What exactly is going on in this industrial landscape? What are the geysers spewing? Is it being re-forested or ravaged? Look deeper into the images and there’s a creeping sense of unravelling disquiet. Are things being assembled or deconstructed? We can’t be clear, even if the artist is. But one thing is for sure: in its sheer skill of execution, crafted composition and subliminal Breughelesqe narrative power, Noonan’s work made him the worthy winner of Eye Line. 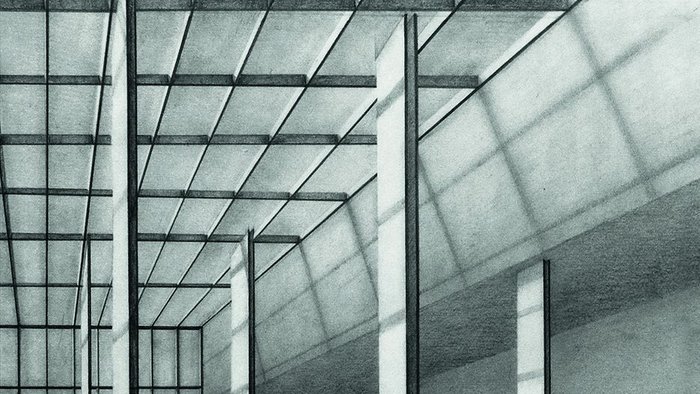