From Unité to the Barbican, megastructures of the past offer a glimpse of the way we may live in the post-work economy

Most of the utopias in this series have been conventional settlements, at least in the sense of being accumulations of individual buildings. There is another kind of utopia though, one that absorbs a number of architectural programmes into one vast building: the megastructure.

For the early modernists the antecedent of the megastructure was the ocean liner. Le Corbusier regarded them as floating cities and admired them as much for their conflation of programme as for their engineering purity. His 1931 design for the city of Algiers was an early experiment in exploring this idea. Here he proposed a vast serpentine wall of accommodation snaking along the Mediterranean coast. Its combination of epic scale and microscopic intensity of occupation is one of the persistent themes of megastructures: in their vastness they also offer the possibility of limitless variety and freedom of occupation.

Le Corbusier was to realise a version of the megastructure with his Unité d’habitation housing blocks. The most fully resolved of these was the version constructed in Marseilles in 1952 which incorporated, along with housing, a street of shops, offices, a rooftop school and playground. The Unité scooped up previously separated programmes of the city – living, working, learning – and moulded them into a single complex object. Le Corbusier intended this strategy to allow the variety and life of the street to permeate his tower and slab blocks but it also offered important formal and expressive possibilities.

Retroactively, Rem Koolhaas identified New York as a city of megastructures in his book Delirious New York, first published in 1978. Koolhaas branded New York a ‘culture of congestion’ where previously distinct and separate architectural programmes where piled up into intensely occupied skyscrapers. The Downtown Athletic Club offered one of the most compelling examples: its section reveals a gymnasium, swimming pool, golf course and other leisure spaces compressed together to form an intense vertical city.

Koolhaas developed this research into design strategies that accumulated different functions into single structures, the ‘Extra-Large’ buildings of his book SMLXL. None of the programmes on offer to his OMA office quite managed the functional complexity of the Downtown Athletic Club but a number exploited warped floor plates and continuous vertical circulation patterns to suggest ways in which such things might happen.

If there is a project in the UK that explored the idea of the megastructure in earnest it is London’s Barbican by Chamberlin, Powell and Bon. Likened frequently to a vast cruise ship, the Barbican contains some 2000 individual apartments along with a concert hall, art centre, shops, restaurants, two schools and a cinema complex. No wonder it has proved a popular place to live for older people – many of its residents have remained living there since its first flats were let in the late 1960s. Visit the cinema in the afternoon and it’s possible to see people who have brought their own cups of tea with them.

The Barbican’s perceived faults – poor circulation, a confusing multiplicity of levels and a sense, once inside it, of being marooned – can also be regarded as strengths. It is its own world, a city within a city. Its ramps, podiums and elevated walkways offer a series of thrilling spaces and the sheer sculptural chutzpah of the architecture is exhilarating. It is the modernist city made manifest but it can also be seen as anticipating postmodernism too: a cubist, three-dimensional landscape full of fragments of historic architecture.

The Barbican was a product of the 1950s that was completed in the 1970s. In this it bridged the 1960s avant-garde which took the megastructure concept in another direction. Here it developed into flexible or open grid structures into which functions could be dropped or plugged. This strategy was exemplified by projects such as Archigram’s Instant City or Archizoom’s No-Stop City. The ‘architecture’ of these projects was conceived as a sort of lightweight continuous framework animated by programme and activity. Behind it lay a fundamental critique of architecture: instead of heavy masonry, permanent structures and spatial hierarchy it offered spaceframes, ephemerality and endlessness.

Superstudio’s Continuous Monument took Le Corbusier’s Algiers scheme, emptied it of specific function and extended it infinitely across the globe. Continuous Monument anticipated a conflation of urban and rural conditions where architecture provides an ever present but ethereal background atmosphere. If it was a megastructure it was one emptied of function, an anti-architectural framework for life.

The most politically lucid version of these ideas was Constant Nieuwenhuys’ New Babylon (1959-74), a ‘post revolutionary’ city that would hover above the existing capitalist one as an endless sequence of leisure spaces that defied conventional spatial and social organisation. New Babylon offered unstructured play and adventure rather than work, family or social betterment as the drivers of architecture. It anticipated radical ideas of today concerning ‘luxury communism’ where pleasure, hedonism and freedom are redefined as ambitions of the left. If socialists of previous generations were concerned with radically reshaping the conditions of work and housing, today’s new left is anticipating a post-work economy where architecture’s challenge might be to release us from the moribund structures of routine. The Barbican, with its luxurious multiplicity of spaces, experiences and activities – along with the sheer pleasure of its architecture – might offer another clue as to what form this future utopia could take.

Utopia as a holiday destination 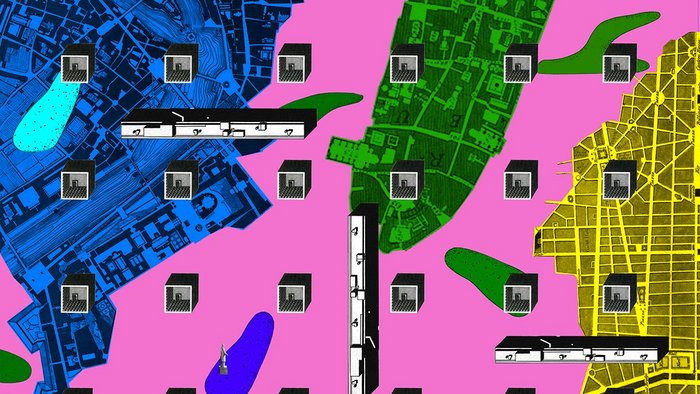