Fees are continuing to move up, while hourly rates remain flat. How can it be? Headlines and analysis of the latest figures 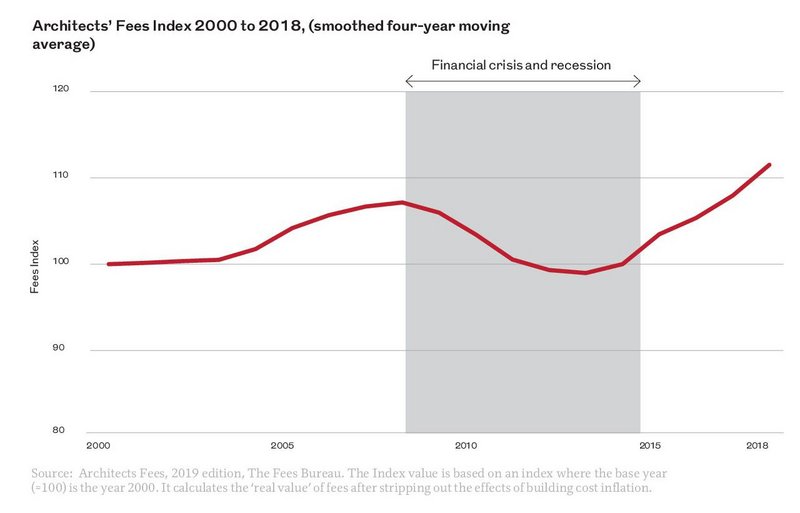 History shows there isn’t a direct relationship between hourly rates and fees charged. The latest edition of Architects Fees has been published, the results of a survey which has been conducted among architects of all sizes across the UK continuously for the last 20 years. Respondents provide data on the fees they charged for all the new jobs they received – so these are actual commissions, not just fee bids – and show an upward trend. The same respondents also provide hourly rates data. These rates are not rising so how can the fees for jobs be rising?

Looking back over the trends since this survey began, average hourly rates kept on rising in the 2000s. When the financial crisis hit, hourly rates fell back initially, but then flattened and started to recover. By 2015, hourly rates were higher than they were before the crisis. Since then, rates have flattened again, refusing to move up or down in any consistent or meaningful way.

Contrast this simple pattern with the way average fees have moved. These climbed at a faster rate than hourly rates in the early 2000s, but then fell dramatically as the financial crisis unfolded. Fees, unlike hourly rates, fell to well below their year 2000 level during the crisis but then started to recover and have kept on rising. So the hourly rates line is flatter, and less responsive to shocks, than the average fees line. That’s how we get average hourly rates standing still while average fees are moving up.

Average fees have been pushing up across the board, but in the last 12 months it’s been the commercial and public sectors which have seen the biggest improvement. The research analyses the data as an index, and the Architects’ Fees Index has increased from 112 last year to 115 this. That index – which is based on a wide range of jobs and strips out the effects of building cost inflation – is now at its highest level since the survey started in 1998. While the fees index tumbled sharply during the recession, it recovered slowly and by 2015 it had just exceeded its pre-recession peak. In the last two years, the Index has continued to grow.

Housing work, particularly small house extensions or alterations, dominates architects’ workloads, and average fees here have increased in the last 12 months but only for refurbishment work. Some of the most convincing upward movements in fees seems to be for larger refurbishment jobs; average fees for minor works remain competitive. The average fees recorded for private housing new build work is slightly lower this year, particularly for smaller jobs.

A quarter of sole principals charge £99 or more per hour; another quarter charges no more than £63 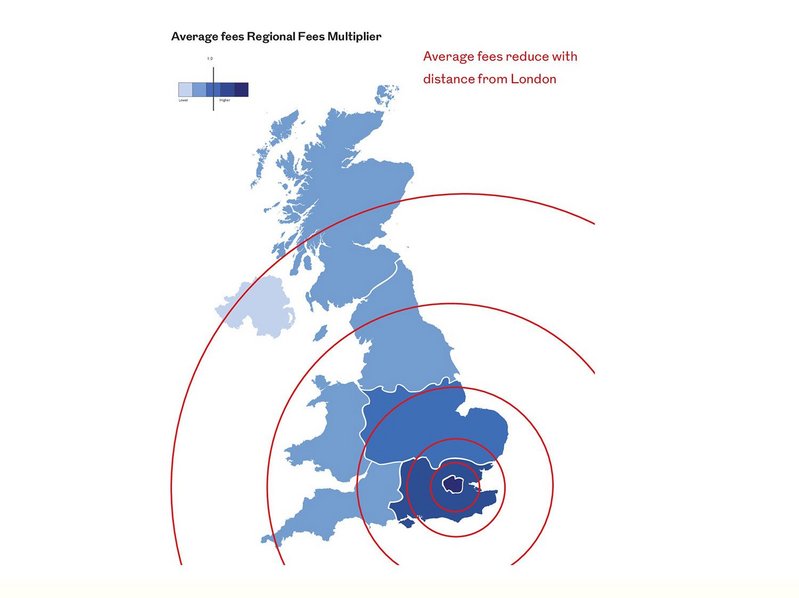 The demand for architects’ work in London is such that fees and hourly rates are highest here. Average fees reduce with distance from London in a very direct way. Average fees are about 10% higher than the UK average in London and the South East; and about 10% lower in Northern Ireland, Wales, Scotland and the North of England. Across the Midlands, East Anglia and the South West, average fees are around the UK average. What’s emerged recently is a real narrowing of the differential in average fees between London and the South East. London remains highest, but fees in the South East are coming close to matching those in the capital. This is probably a consequence of house price inflation in the region pushing up demand for residential architectural work.

Apart from geography, the main factor influencing hourly rates is size of practice. Size has a huge impact on rates – across the board, not just for partners/directors. The average rate for an associate in a three to five person practice is £75; compare this with the average of £98 in a practice with more than 30 staff. An architect with less than five years’ experience, is charged out at £55 in a three to five person practice compared with £71 an hour in a practice with over 30 staff. While it’s clear that large practices charge more than small ones, the group of staff with the biggest variation of hourly rates is mostly within one size group: sole principals. The difference between lower and upper quartile figures among sole principals is massive; a 55% difference. A quarter of sole principals charge £99 or more per hour; but another quarter charge no more than £63.

That bottom quartile figure is the same rate that a large practice charges for an architectural assistant. Many sole principals will be competing against part-qualified architectural designers.  But can working at such low rates really be the basis for a sustainable business? And given the rapidly increasing numbers of architects emerging enthusiastically into the profession from schools of architecture, or arriving in the UK from overseas, it may be hard to avoid further downward pressure on rates.

The low pay earned by some sole principals is evidence of this. If sole principals charging these lower rates want to avoid this circular trap, surely the way forward is to start raising hourly rates backed up by the evidence of clever, elegant and successful projects, aimed at convincing clients that using an architect brings tangible benefits.

Aziz Mirza is director of The Fees Bureau
The full findings are available as a printed report or pdf, Architects Fees, or as an online subscription service, The Fees Bureau Calculator