How will practices survive the coronavirus? A look at architects’ workload statistics over the last half-century gives some clues as to how the present downturn might progress

It’s becoming clear that what economists at the IMF call the Great Lockdown will last for more than a few months. As we live through one of the most extreme events in modern history, how will this turn out for architects? We’ve examined past architects’ workload statistics as a source of clues as to how the profession will fare into, during and after this downturn. The dataset has a very long time series; the statisticians who run The Fees Bureau have been collecting data for more than 30 years, continuing the methodology the RIBA used for its own workload survey which ran in the previous decades.

The profession’s workload statistics go back to 1964, providing a consistently sourced record of activity throughout the past half century. The data shows just what a cyclical industry this is. Architects are at the sharp end. The economy as a whole bumps along, rarely growing or falling by more than 3 or 4 percentage points a year. Construction output is more prone to boom and bust, rising and falling by up to 10% a year. But architects have it worse; annual rises or falls of 50% or more are not unheard of. Such volatility in the amount of new work may well contribute to the make-up of the profession; plenty of very small practices which are nimble enough to absorb dramatic changes to the pace of work. 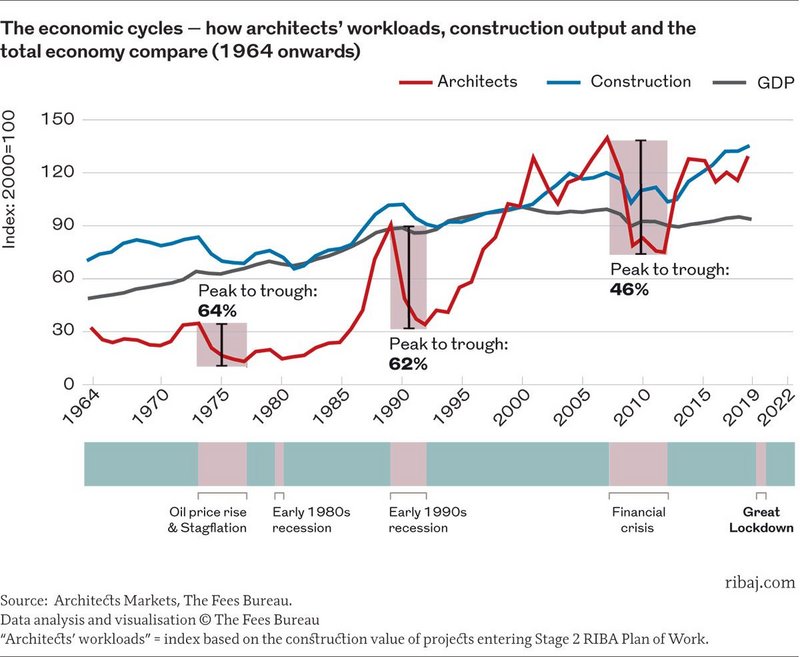 Architects’ workloads tend to both lag behind the wider economy and anticipate it. Unfortunately for architects, the lag is when the economy is in recovery mode and the anticipation tends to be before the economy dives. So architects tend to be one of the first groups to go into a recession and one of the last to recover – which is why the swings are just so volatile and extreme.

The data since 1964 shows there have been three major recessions for architects. The first was the result of the oil price shock in 1973/74, when a rapid succession of increases in oil prices kick-started inflation and a worldwide recession. This came at the end of over-heating in the property market and speculative commercial property was badly hit. The second major recession for architects was in the early 1990s, brought on by an over-heating of the economy credited as Chancellor Nigel Lawson’s  boom. Property and construction activity were both at extremely high levels, investment continued to pour into new construction projects and rapidly rising house prices stoked a demand for house extensions. When Lawson attempted to cool the economy by, among other things, introducing VAT on house improvements, it combined with high inflation and high interest rates and the economy nose-dived, precipitating a foreign exchange crisis and the pound’s exit from the ERM. The most recent major recession was as a result of the financial crisis in 2009. In each major recession, architects’ workloads started to fall before GDP was hit. This is largely because workloads reflect investors’ confidence, which turns down before economic output.

The three major recessions since 1964 all had dramatic implications for architects’ workloads. In each case, the fall in workloads from peak to trough massively exceeded the fall recorded by construction output and GDP. Architects’ workloads fell more than 60% in the oil price crisis and early 1990s recessions, and by 45% in the 2009 financial crisis. The average fall across all three recessions is 57% compared with 14% for construction output and an average 5% peak to trough fall for GDP.

Architects and the construction industry experienced recessions lasting around twice as long as the economy overall in 1973 and the early 1990s, while GDP fell for one year longer than construction during the financial crisis.

So the experience of past recessions is that architects’ workloads fall quicker and further than both construction output and the economy overall. Typically, it takes around 10 years for architects’ workloads to return to their pre-recession peak, about twice as long as it takes for the economy as a whole. But while architects take longer to experience a recovery, when it comes the expansion is rapid. These characteristics do not make for easy business planning or cashflow management.

Could it be different this time? After all, the downturn has been rapid – immediate – so there was no anticipation of the event. In this respect it bears most similarity to the 1973 oil crisis, which was a ‘shock’ to the economy. That recession came after rapid expansion in construction and property. The background to the present downturn is of relatively stable workloads.  That’s encouraging and suggests there is potential for long-term underlying growth. But lessons from 1973 also suggest caution. That recession affected the economy negatively for two years, but the wait for growth was even longer for construction and architects. These two indicators each took four years to recover, meaning the recession lasted twice as long for the sector as for the rest of the economy. And when recovery came, the rate of growth in construction and architects’ work was substantially higher than in the wider economy, bringing challenges to practices seeking to rapidly scale up.

The most recent recession, the financial crisis, does have some similarities although it was nothing like as immediate. The downturn had been signalled for some months, with predictive indices trending down well before workloads started to fall. And the reason for the recession was principally down to a credit crunch; lenders unwilling or unable to lend. This is not the position today, when governments are guaranteeing loans to banks, who are positively encouraging solvent businesses to take up offers of loans to push liquidity into the economy.

We have devised three possible scenarios to model how the Great Lockdown downturn might impact the profession. This is always an uncertain science, given the paucity of economic data and the rapidly evolving nature of the crisis. 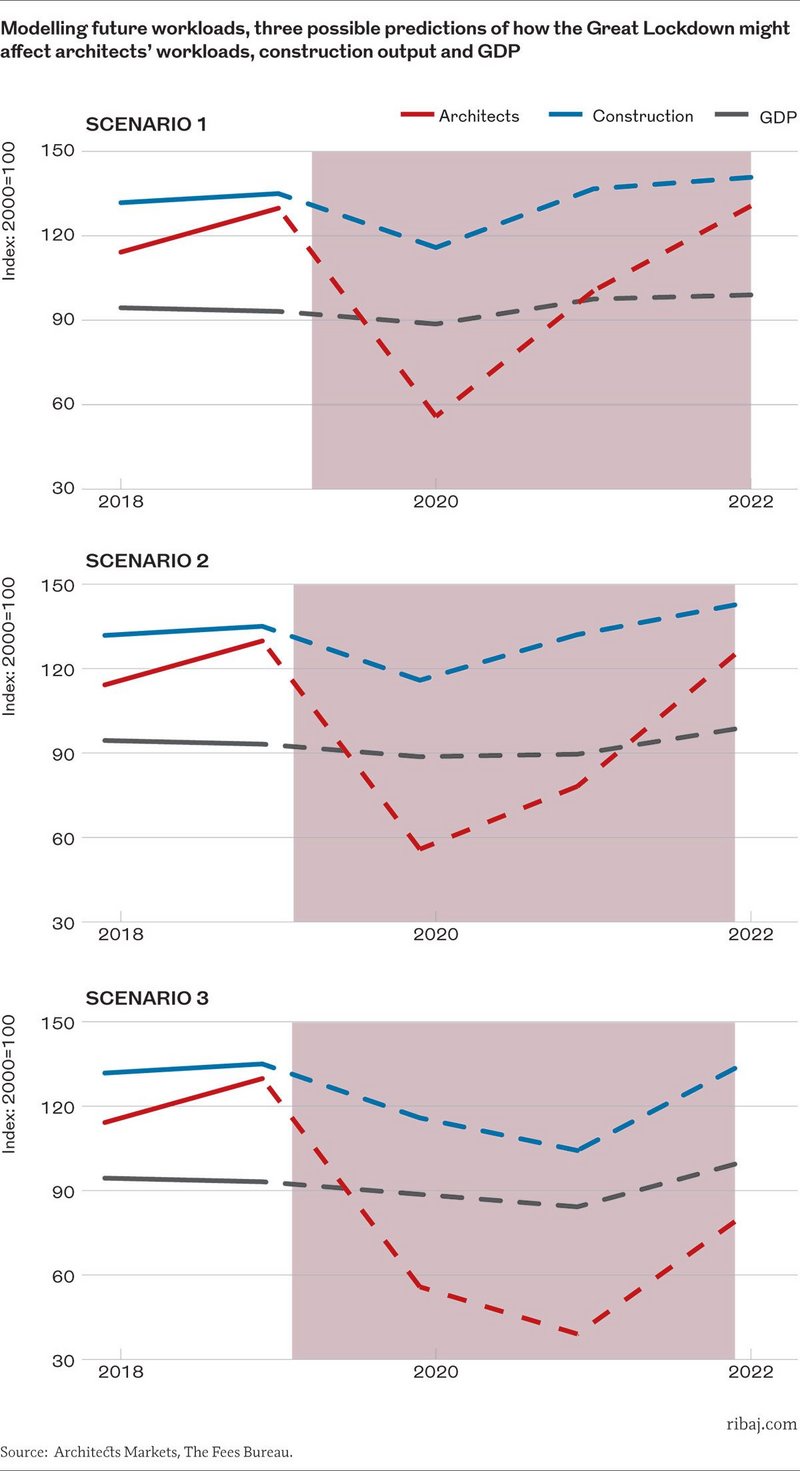 This scenario reflects early thinking about this crisis. Shortly before departing as governor of the Bank of England, Mark Carney said the economic shock ‘could be large but will ultimately be temporary’. At the time, his words were interpreted as indicating a fairly short period of downturn. When modelled, this scenario assumes a very sharp shock to the economy with a relatively short period of lockdown after which the economy would emerge and rapidly return to pre-crisis levels. The result for architects would be that workloads return to trend relatively quickly. Both the economy and workloads produce a ‘V’-shaped chart, representing a quick recovery. Given what we know now about the likely route out of lockdown, this scenario seems unlikely.

For this model we assume a very sharp shock to the economy with a long period of lockdown during which parts of the economy would open up but much of the economy would remain restrained, with lower than usual levels of activity. When modelled this shows architects’ workloads remaining subdued for longer and with a slower recovery. Workloads would remain lower for rather longer than the economy as a whole; investor confidence would be key to the speed of the recovery. This model results in a ‘U’-shaped chart, representing a rapid fall and a longer period of stagnation, followed by a fairly rapid rise to return workloads to levels similar to those immediately before the crisis.

This scenario assumes a very sharp shock to the economy with much economic activity restrained, accompanied by various periods of partial release from lockdown but also further lockdowns. This stop-start effect on the economy would severely dent investor confidence and the construction industry’s ability to deliver buildings. This has the most extreme outcomes for the profession, our modelling shows that architects’ workloads would fall rapidly this year and again in 2021, remaining low for another two or three years as investor confidence failed to recover. This would produce an extended ‘U’-shaped chart. The way out of the downturn would be similar to previous recessions – the economy would recover first and confidence would lag behind, producing a similar lag in the recovery of architects’ workloads.

The three possible models are increasingly severe in terms of the repercussions for architects. We think the key driver behind the severity of impact is the length of time the deepest part of the crisis lasts ,as well as the length of the recovery period. Current thinking tends towards something between scenarios 2 and 3 being most likely.

Confidence has always had the greatest impact on architects’ workloads. Whether that’s consumer confidence which drove retail forward in the 1980s, home owners’ confidence derived from rising house prices in the 1990s, or the confidence to invest in commercial development which drove forward the redevelopment of so many city centres. Only with a method to manage our way through, and eventually out of, the Great Lockdown can confidence return. With that lies the answer as to which scenario is closest to the eventual outcome.

Aziz Mirza is a director of The Fees Bureau This article is derived from a longer analysis in The Fees Bureau’s latest report Architects Markets, published May 2020