Yesterday’s breakfast panel debate on Brexit and the construction industry found reasons for optimism, but many in the audience were still reeling from the referendum result. Michael Willoughby reports 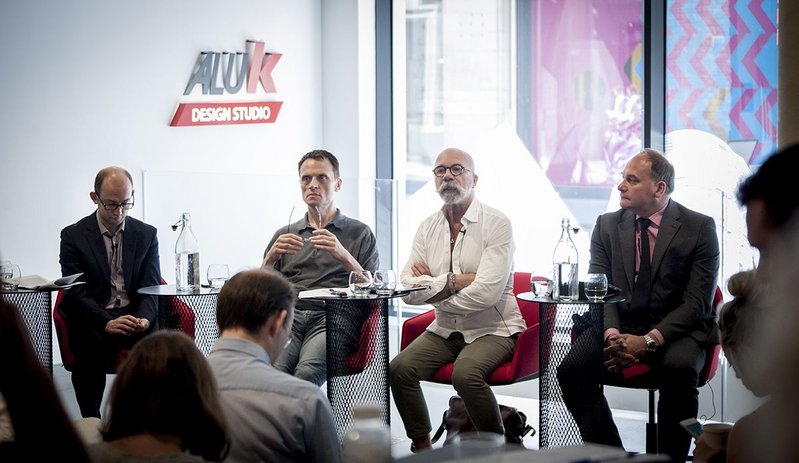 There is currently no matter around which there are so many questions – and so few answers – than the UK’s collective decision to leave the EU. So it was no wonder that ALUK’s morning talk on Brexit and the building industry was short on seats and attended by around 80 people.

Some of the questions the audience were seeking answers to were: can we be sure that the referendum will be followed through and that Brexit will happen? If it will – and it seems likely, but who’s placing bets these days? – what might it look like and what do we want it to look like. These unanswerable questions remained unanswered, to no-one’s great surprise.

It’s worth recapping some of what we know about Brexit and its impact on the UK economy. Nearly all measures of consumer and business confidence fell, along with the pound and FTSEs 250 and 100. Confidence remains depressed, the pound is back to mid-2014 levels against the euro, the FTSE 250 has matched its pre-Brexit level and the FTSE 100 has surpassed it. In other words, even the indicators give a mixed picture. In terms of what’s to come, various experts have predicted everything from a slowdown to a mild recession via a ‘short sharp shock’.

A panel drawn from the world of residential and commercial property as well as architecture and design included Nick Whitten, associate director of research at Jones Laing LaSalle, Mark Cleverly, commercial director of property firm Arcadis, and Nigel Coates. They were chaired by ideas-dynamo, Matthew Taylor, chief executive of the Royal Society of Arts (RSA).

In open conversation with the large audience, the team first discussed why the construction industry finds itself at the sharp end of all this.

Firstly, they said, any knock in consumer and business confidence swiftly impacts property funders and developers; consumers worry whether they are making a wise investment, while businesses are worried about consumer confidence and shifting from a growth to a defensive model, in property as everything else. The question is how far any prophecy of gloom is self-fulfilled – and whether we were at the top of the market even before the referendum took place.

Secondly, a new Great British fervour for stopping people working where they want could have serious negative impacts on a collective industry which thrives on European creativity and skilled tradespeople – and in which skills shortages have driven tender prices ever higher.

Thirdly, a huge question mark hangs over UK financial and related professional services, which employ more than 7% of the UK workforce (2.2m employees, two-thirds of which are outside London), producing nearly 12% of total economic output, contributing £66bn in taxes and generating a trade surplus of £72bn. The question is whether the City can maintain its ‘passport’ outside the EU, on which companies rely to operate freely across Europe’s financial markets while having most of their staff and operations in the UK capital.

According to Cleverly, this is why the big developers such as British Land and Great Portland Estates have recently put out statements: their banking clients are reviewing projects with large floor plates that have not been fully funded. More widely, he added, there is concern of a sudden oversupply, given many property firms' second thoughts about development. Clients, he said, are ‘pausing to reflect’. He believes a ‘zombie economy,’ where developers delaying projects have a self-fulfilling negative impact on the economy, is certainly a risk.

However, despite this potential toasting of the audience’s bread and butter, the overall message from the property experts on the panel was don’t panic.

Our design guru was more guarded; he thought optimism was the best way forward, even if he didn’t seem to have terribly much of it to hand.

Whitten said this was not 2008 because companies and households were not nearly as stretched as before and the weaker sterling and low cost of borrowing provided an ‘economic safety valve’. He added that there was still a huge undersupply of homes in the UK, with only half of the Greater London Authority target being built in the capital, and just 150,000 of a 250,000 target put up nationally. Price pressures are firmly upward, with 6% growth per annum making sure the product is worth investing in.

In fact, he was almost blasé about the impact of Brexit on the housing sector, saying that George Osborne’s 3% increase on second homes stamp duty had caused an easing off ‘discretionary spending,’ or second homes and buy-to-let properties.

Cleverly added that the economy was near full employment and pointed to the level of interest in acquisitions and bargain hunting by a ‘wall of foreign capital’. The property sector had a lot going for it, he said, with commercial vacancy rates in London being just 4% and only 8% within the M25. The take up of pre-let space was holding at 31%, similar to both last year and the year before.

Coates probably voiced something closer to the audience’s view of the referendum and its impact, saying he had felt ‘kicked in the stomach’ on the morning of 24th June. His contacts in Florence, he said, ‘thought we were mad’. Work from that city has stopped flowing as it had before and he was aware that workers from the EU were unsure whether they were welcome and able to visit and work in the capital. Their disappearance would, he said, be a tragedy for London because much of its specialness lies in its internationality.

However, Coates gave a ringing endorsement to London mayor Sadiq Khan’s #Londonisopen campaign, launched this week to encourage people from Europe and beyond to keep coming. Chair Matthew Taylor said that there were increasing calls for regional employment quotas. London was, after all, more vocal in its desire to welcome new arrivals – even though many sectors of the economy are totally reliant on a foreign workforce. Coates summed up: ‘Guess where I will be opening an office?’

In terms of what the panel and audience wanted there were numerous requests, including regeneration-led spending by the new prime minister, clarity over the nature of Brexit and that the powers that be make clear what benefits Brexit might bring.

All of which led Taylor to conclude via Twitter: ‘takeaway from chairing event on Brexit and construction – sector's historic failure to speak with one voice may now come home to roost.’

A motion to meet again in October for further discussion was taken as carried.