Strong public spending and a surge in private confidence might help steady the ship through unfavourable seas – and a wetter future? 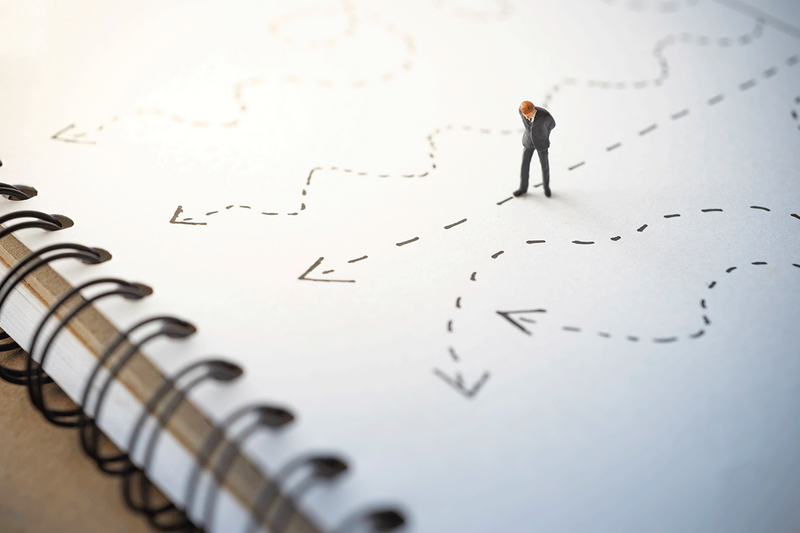 Release of the Election 2019 exit poll generated a spike in the value of sterling – a market signal of uncertainty evaporating. No ifs no buts, with a stonking majority for the Tories, we will be leaving the EU. In short order.

For construction, Brexit uncertainty has been a drag anchor. But does this election result free it from its flirtation with recession?

The final reading for construction output before the electorate put crosses to ballot papers was far from encouraging. Activity was down sharply in October (2.3%) with housing bearing the brunt, both new build and repair, maintenance and improvement. 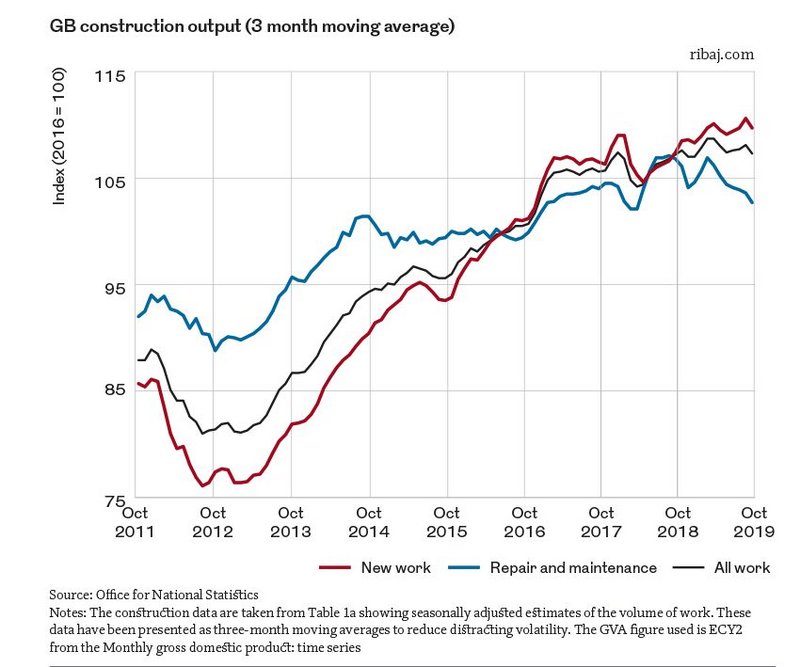 The weakening of the construction economy may not have registered with most of the electorate, but for those working within the wider industry the figures add to a worrying trend.

Chart 1 shows how construction has phutted and spluttered since the EU referendum. Look under the bonnet of the ONS figures and you find it is investment in new housing and infrastructure that has kept the construction sector moving forward. The rest is all a bit weak, except for the private industrial sector boosted by an appetite for new warehousing to feed changing shopping habits as the nation moves online.

And, while new work overall has continued to show some buoyancy, the repair and maintenance sector dropped into reverse gear this year. 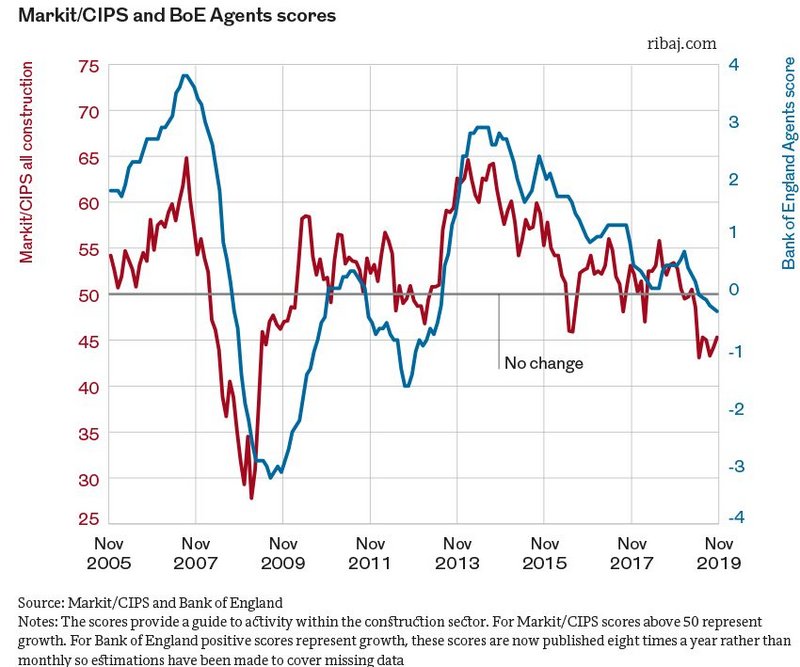 Charts 2 and 3 present similar if not glummer pictures than the official figures for the path of construction activity. Both the Bank of England agents and the IHS Markit/CIPS UK Construction Purchasing Managers' Index (Chart 2) suggest the industry is as weak as it has been since pulling out of the recession. 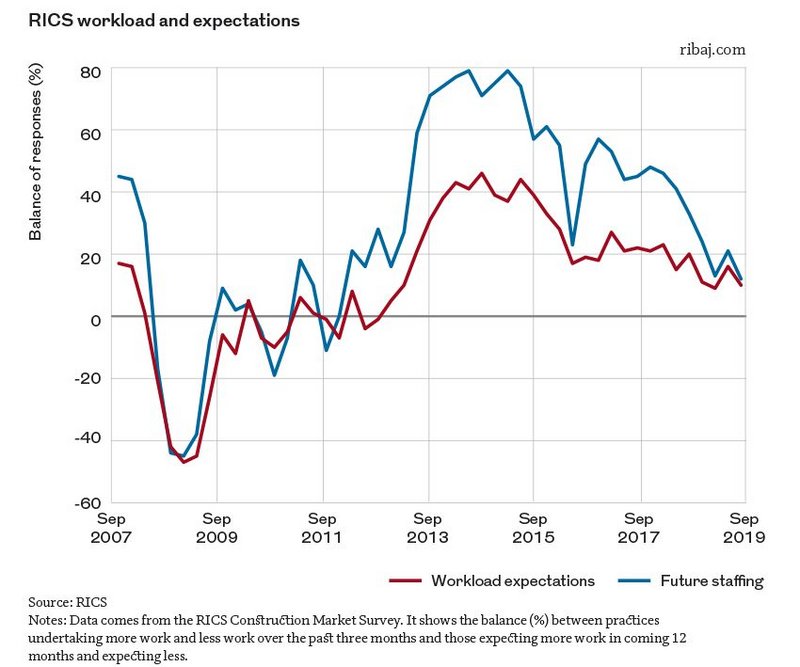 The RICS construction survey tends to be a lead indicator for work on the ground. In Chart 3 we see it showing a falling balance between firms doing more work over the past three months rather than less and a rise in pessimism over optimism about prospects for the next 12 months.

One area that the figures suggest has taken a knock is housing repair, maintenance and improvement (RMI) work. This is a mainstay for architects up and down the country. When measured on a three-monthly moving basis it has reached the lowest level of activity since July 2016. Indeed, October’s figure was the worst since December 2015.

Oddly, the top line figures from an FMB survey of local builders that typically carry out this work present a more upbeat message (Chart 4). While there has been slower growth more recently, they suggest at least moderate to good growth and expectations are relatively high.

But dig into the survey detail and it becomes clear that, compared with the overall results, private housing RMI workloads in the first three quarters of this year were poor, with net balances of +2, –2 and +1 respectively. This more closely reflects the pattern suggested by the housing RMI figures in the ONS output data. 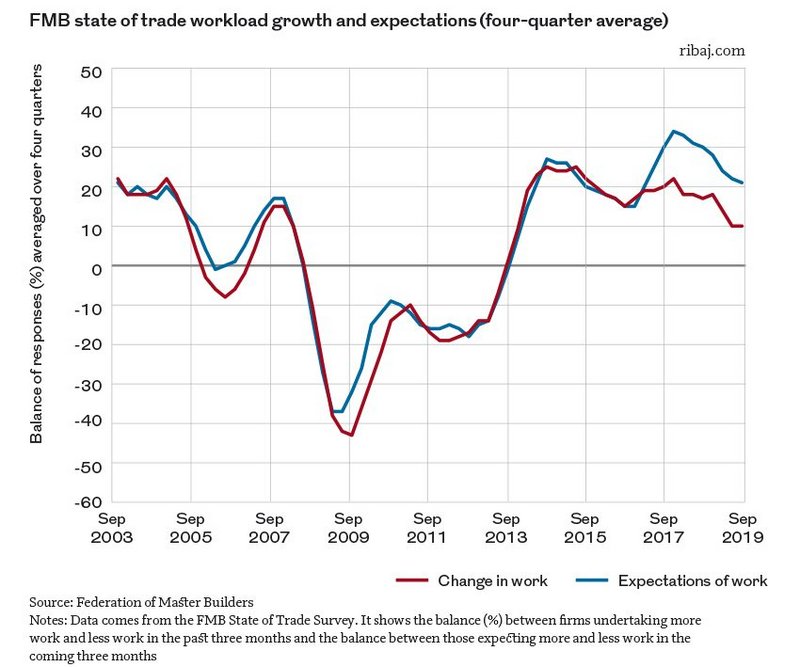 One point to note is that many people are finding it harder to get local builders to undertake work. For some time there has been growing demand while the supply has been restricted, mainly due to limited skilled labour. For about three years, 60% of builders responding to the survey reported difficulty recruiting carpenters and bricklayers.

Lack of skills inevitably means many local builders have had to schedule work well into the future. This provides them with some cushioning against inquiries falling, but it does mean less work coming through. However, hints in recent FMB survey data that the difficulty in recruiting skilled workers may be easing slightly does fit with a softening in the home improvement market. 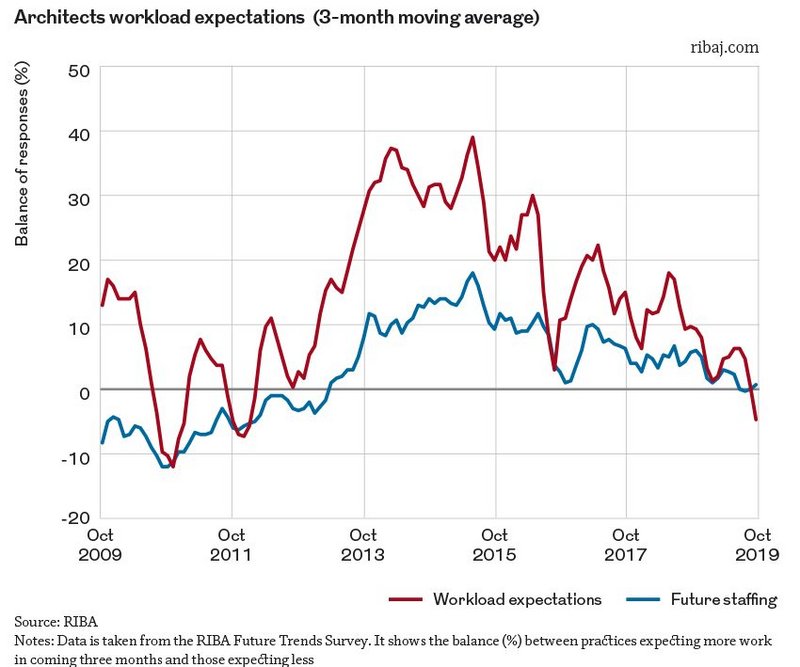 Chart 5 shows the RIBA Future Trends headline figure for October’s workload expectations in the coming three months. Already easing, it took a sharp dip. A lot of this was due to the fall in expectations among smaller practices (one to 10 staff). The balance between firms expecting rising workloads and a fall over the next three months shifted from -8 in September to -15 in October. Many of these firms will see home improvement as bread and butter work.

Before being too pessimistic about market conditions, it is worth noting that supply and demand issues are not the only factors that shape the level of activity. The UK has had a very wet year. Persistent rain and soggy ground conditions literally puts a dampener on construction activity.

Met Office data show a wetter than average spring was followed by one of the top five wettest summers over the past 100 years. This was followed by a much wetter than average autumn. The UK has seen significantly more rainfall (the trend suggests about 10% more) over the past decade than the average over the past 130 years. Scientists had expected rainfall to rise in the UK with climate change, so in future it looks like the industry will need to factor in heavier rainfall.

So, what of the future now we are destined to leave the EU?

Currently the economic backdrop is poor. Chart 6 depicts the consensus of forecasts compiled by HM Treasury. It shows very sluggish growth in GDP next year with a bit of a bounce-back promised in the following two years. But growth will remain under the long-term average annual GDP growth which is generally regarded as 2.5%, even if sentiment pushes up the expectations of the forecasters.

The average level of growth will be about 1.4%. This is worrying for construction. There is a broad relationship that suggests the likelihood of recession is very much heightened when the total growth over a period of three years falls below 5%. That is what this forecast suggests.

The notion of a full-blown recession is not predicted by the main forecasters. The Construction Products Association forecast in autumn suggested growth below 1% in both 2020 and 2021. The construction forecast from Experian was a shade higher.

But prospects rest heavily on strong public spending. Obviously, the industry can be spared from a recession prompted by weak market growth by heavy spending on, for example, infrastructure and housing. And the main political parties did seek to present a future of boosted investment in the built environment.

And, if private investment has been held back by uncertainty over Brexit, a surge may result from more clarity over the UK’s trading future. That might offer construction a welcome lift.

However, based solely on the facts, the notion that uncertainty was banished with the election and that clarity might be restored looks hard to accept, despite Boris Johnson’s best efforts at delivering high claims and misdirections.

A large slice of political uncertainty has been resolved by the election, but it persists in many areas, not least in the remaining threat of a no-deal Brexit. The difference between that and an orderly exit is significant in the eyes of most experts. Furthermore, we’ve yet to see the substance of trade deals with countries outside the EU. 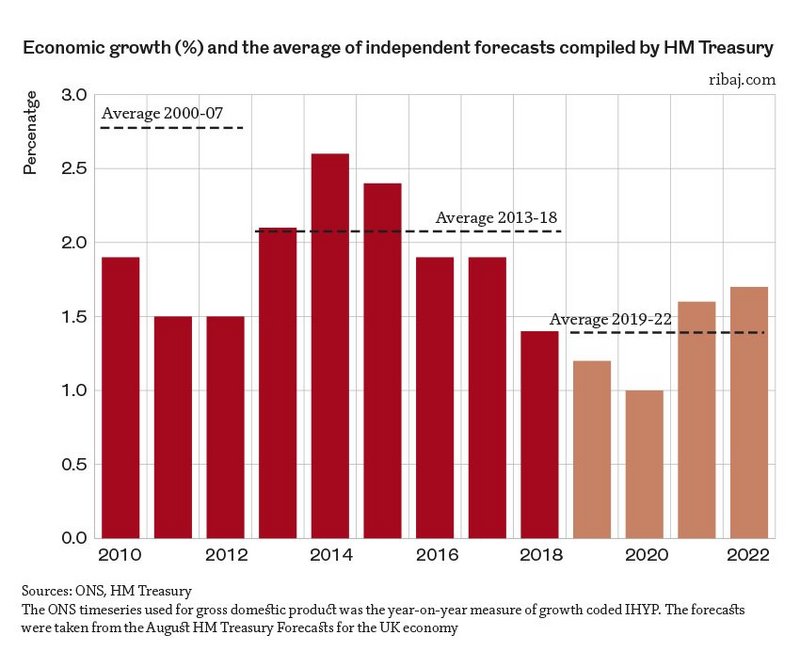 In an increasingly global economy, trade and diplomacy are critical to the UK’s prosperity and even more so outside the EU. There are huge matters yet to be settled that will determine how Great Britain and Northern Ireland (seemingly set for separate rules) will operate and, ultimately, perform economically.

In trade and diplomatic terms, the timing of Brexit is not great. We’ll be leaving the shelter provided by membership of the EU into a swelling storm of trade disputes and growing fractures in the global rules-based system. Metaphorically, we will be clad only in undergarments as we seek apparel (in the form of trade deals) more suited to the increasingly hostile and nationalistic climate emerging in international trade. Meanwhile, the World Trade Organisation, which offers a port in a storm, is under increasing stress.

Donald Trump has followed his predecessors in claiming the WTO is unfair to the US. He is blocking the appointment of judges to its seven-member Appellate Body, seen as the ultimate umpire in global commerce. (The terms of two of the remaining three members expired on 10 December, meaning that at the time of writing it was unable to sit as the rules require three members to hear an appeal.)

This may all seem exotic and distant from, say, the day-to-day opportunities available within the home improvement market. But they are pertinent. International trade is vital to the economic wellbeing of the UK which in turn determines the appetite for home improvement.

Uncertainty matters and it matters a lot in construction. We are not done with it yet.