Crawford Wright of the Department for Education explains what it wants from the £1 billion programme, and outlines its new sustainability standards

The government’s 10-year School Rebuilding Programme (SRP), which begins this year with a £1 billion rebuilding and refurbishment of 50 schools, is to embrace new sustainability standards. As these new requirements are codified we speak to the Department for Education’s head of architecture and design: schools and colleges, Crawford Wright.

All new school buildings in England must be net carbon zero in operation as part of the S21 output specification being introduced in the new contractors’ framework for schools in November. Ahead of that, early tranches of the SRP are already piloting the climate change elements of S21. Other changes include a greater emphasis on ventilation, outdoor learning spaces and use of landscape as part of climate change mitigation.

Wright calls the net carbon zero in operation requirement a ‘big uplift’: ‘Anything that the Department for Education will be delivering will be net zero in operation. It’s a massive change that we’re really pleased with,’ he says, adding that it is in line with its policy of prioritising a fabric-first design approach. 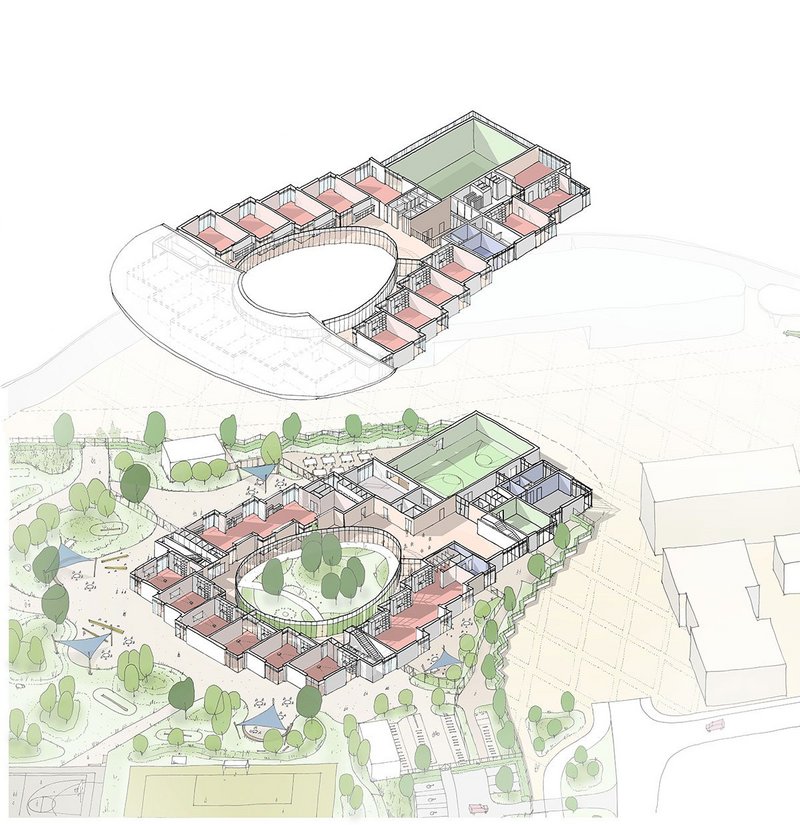 While money for the new programme is still being negotiated with the Treasury, it will come with ‘an appropriate level of funding to meet these requirements,’ says Wright.

Not that architects should expect any kind of bonanza. ‘They’re economical buildings. Creativity is needed to get the best out of limited budgets, but that’s where the architect’s job comes in,’ says Wright, who feels that not enough attention is given to all the ‘amazing’ design work being done at public sector schools. ‘If we can standardise what we know works more, we can get even better at producing good schools.

Wright heads a 30-strong design team of mainly qualified architects. He is proud of its achievements in the 70 years since the first Building Bulletins were produced. Extensive post occupancy (POE) research over the last few years has informed the new specification, and the team is also working on pilot studies for Passivhaus and biophilic designs.

‘We already know that schools that are well-planned, well-ventilated and with good access to outdoor facilities work best,’ says Wright, adding that POE studies show poor performance tends to result from deviations from the brief, or poor contracting work.

Embodied carbon targets, although not part of S21, are also on the radar. These will be informed by the on-going GenZero research project for carbon zero secondary school buildings. For this, Lyall Bills & Young Architects has designed a prototype for a CLT, offsite-manufactured secondary school to RIBA Stage 4, and Wright is hoping this can be developed further, starting with manufacture of the timber cassettes.

‘Our hope is that by 2025, we’d have a design spec for schools that will address the embodied carbon issue,’ says Wright.

S21 will also embody an emphasis on green infrastructure, biodiversity, and use of landscape to help deal with climate change as well as outdoor learning spaces – in secondary as well as primary schools. Even where the SRP project is for just one part of the site, a full-site approach will be required.

There will also be relatively small changes to BB103 area guidelines. These will include an increase in minimum circulation widths from 1.8m to 2.4m. Although introduced to allow better cross-ventilation, this will have other knock-on benefits, particularly for social distancing requirements introduced during the Covid-19 ­pandemic, which have been especially difficult for schools without generous circulation areas. The outcome of changes to BB100 for fire safety in schools (which is out for consultation) will also be mandated in S21.

If implemented, the new zero carbon requirements will have ‘a meaningful impact on environmental outcomes’ says Philip Watson, director of HLM Architects which is working on a number of MMC school projects.

‘As far as public procurement goes, the DfE was already blazing a trail in relation to adopting innovation in MMC. Now it looks like they’re planning on setting targets for reducing energy in use and embodied carbon too, which is great to see,’ he says. 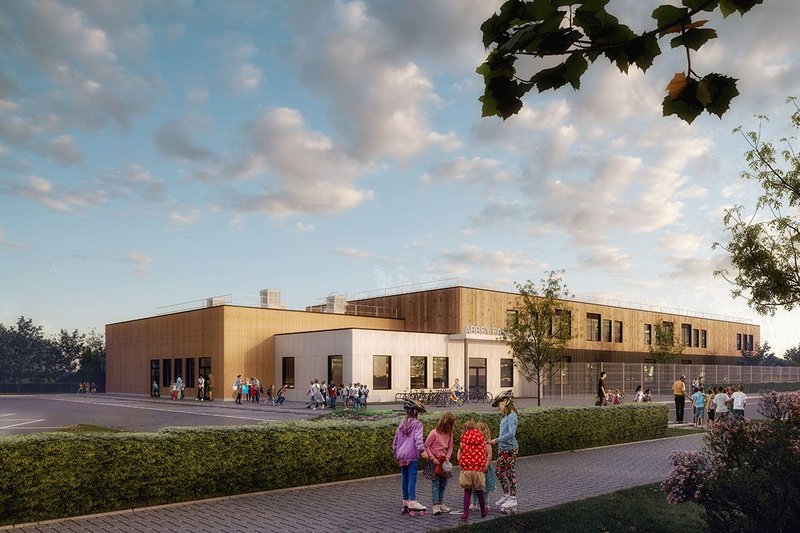 Abbey Farm Educate Together is the first project through the MMC offsite framework to be delivered by Reds10 and designed by HLM Architects.

Both the integration of carbon zero targets, and the presumption in favour of MMC were welcomed by Paul Monaghan, co-founder of AHMM, which won the Stirling Prize in 2015 for Burntwood School. It is teaming up with a number of contractors targeting school rebuilding projects.

‘There has been a lot of progress in the construction industry refining different ­off-site methodologies, which offers great opportunities for innovation. On the whole, all this is very encouraging and should put good design, with all its facets, back on the school building agenda,’ he says.

Net zero carbon in operation is a ‘really welcome, if overdue’, requirement in the government specifications, believes Ben Marston, a director at Jestico +Whiles, which is working on a zero carbon school prototype with one of the contractors on the framework.

‘Anecdotally, many schools built recently have been using more energy than design models predicted, and in some cases more than the buildings they replaced, so it will be essential that the requirements are accompanied by post-occupancy evaluation to enable continuous learning. It is also essential that embodied carbon is part of the assessment. As buildings become more efficient, this is an increasingly important consideration.’

While he welcomed the SRP, he does not expect it to be a particularly rich source of work for architects compared to earlier school building programmes.

‘But they are very good projects for our young architects to learn how to be an architect: they go quite quickly from design to site; and renewing schools, creating the best possible learning spaces for future generations, carries an important social agenda whatever the architectural rewards.’

What is it? It is a 10-year rebuilding and refurbishment programme for schools and sixth form colleges in England. These include primary and secondary schools, academies, city technology colleges and free-schools. The first phase, worth £1 billion, begins this year.

Who’s eligible? Schools don’t apply, with projects instead being chosen by the Department for Education. Priority will be given to those constructed after the war using Laingspan or Intergrid systems – which are identified as having potential structural weaknesses and so are not deemed suitable for retention – and those that are considered to be in the poorest condition according to data from the Condition Data Collection (CDC), a block-by-block survey of schools carried out between 2017-19.

How can architects get involved? By teaming up with contractors on the two frameworks. These are the Construction Framework of contractors, which is divided into value band and region and is currently under review, and the modern methods of construction (MMC1) framework, which was announced in January 2020. The programme is divided into two lots according to size – projects with floor areas from 750m2 to 6000m2 and those with floor areas exceeding 6000m2 . There will be a presumption in favour of MMC as part of the SRP.

Timing: The first tranche of 50 school projects has been announced. Of these, 22 are for Laingspan or Intergrid buildings and the remaining 28 were chosen by CDC data. The first tranche includes projects at three SEN schools and one alternative provision school.

Visit the Department for Education website for more details

Read about the rise of inner city schools, watch architects of RIBA Award-winning education buildings talking about their projects including Julia Barfield and Tom Surman of Surman Weston.